Hub4Tech.com is an online tool to enhance skills & career in technologies including new skills and also provide resume analytics services in 500+ technologies to reduce your hiring time.

Hadoop Online Quiz. DTD Tutorial. A Document Type Definition (DTD) defines the structure and the legal elements and attributes of an XML document. 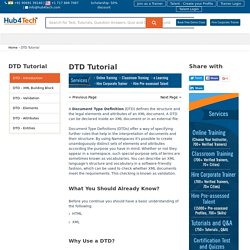 A DTD can be declared inside an XML document or in an external file. Document Type Definitions (DTDs) offer a way of specifying further rules that help in the interpretation of documents and their structure. By using Namespaces it’s possible to create unambiguously distinct sets of elements and attributes according the purpose you have in mind. Whether or not they appear in a namespace, such special-purpose sets of terms are sometimes known as vocabularies. You can describe an XML language’s structure and vocabulary in a software-friendly fashion, which can be used to check whether XML documents meet the requirements. CCNP Tutorial. Cyber Security Tutorial. Information security, sometimes shortened to InfoSec, is the practice of defending information from unauthorized access, use, disclosure, disruption, modification, perusal, inspection, recording or destruction. 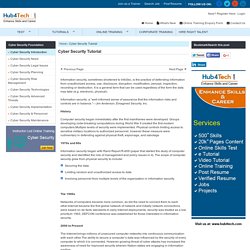 It is a general term that can be used regardless of the form the data may take (e.g. electronic, physical). Information security: a “well-informed sense of assurance that the information risks and controls are in balance.” —Jim Anderson, Emagined Security, Inc. History Computer security began immediately after the first mainframes were developed. 1970s and 80s Information security began with Rand Report R-609 (paper that started the study of computer security and identified the role of management and policy issues in it). Securing the dataLimiting random and unauthorized access to dataInvolving personnel from multiple levels of the organization in information security The 1990s 2000 to Present.

Selenium Interview Questions and Answers. What is Selenium and what is composed of? 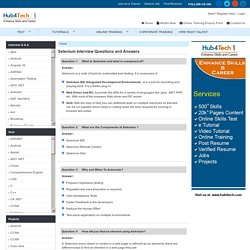 Selenium is a suite of tools for automated web testing. It is composed of Selenium IDE (Integrated Development Environment) : It is a tool for recording and playing back. It is a firefox plug-inWeb Driver and RC: It provide the APIs for a variety of languages like Java, .NET, PHP, etc. With most of the browsers Web driver and RC works.Grid: With the help of Grid you can distribute tests on multiple machines so that test can be run parallel which helps in cutting down the time required for running in browser test suites. C++ Tutorial. C++ is a middle-level programming language developed by Bjarne Stroustrup starting in 1979 at Bell Labs. 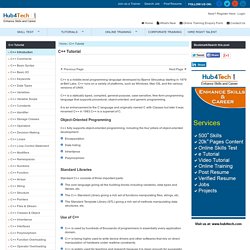 C++ runs on a variety of platforms, such as Windows, Mac OS, and the various versions of UNIX. C++ is a statically typed, compiled, general-purpose, case-sensitive, free-form programming language that supports procedural, object-oriented, and generic programming. It is an enhancement to the C language and originally named C with Classes but later it was renamed C++ in 1983.C++ is a superset of C. Object-Oriented Programming C++ fully supports object-oriented programming, including the four pillars of object-oriented development: EncapsulationData hidingInheritancePolymorphism Standard Libraries.

Selenium Tutorial. What is Selenium? 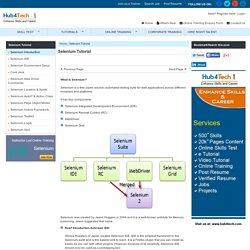 Selenium is a free (open source) automated testing suite for web applications across different browsers and platforms. It has four components. Cisco CCNA Exam Tutorial: The Best Time To Schedule Your Exam in Computer Certification - ccnaonlinetraining’s diary. In preparation for CCNA exams accomplishment, one of the essential steps is to plan your exam! 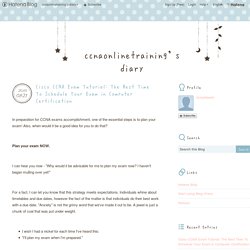 Also, when would it be a good idea for you to do that? Plan your exam NOW. I can hear you now - "Why would it be advisable for me to plan my exam now? I haven't began mulling over yet! " For a fact, I can let you know that this strategy meets expectations. I wish I had a nickel for each time I've heard this:"I'll plan my exam when I'm prepared. " You know when "prepared" is? By booking your exam now, you give yourself a mental due date. You can plan your exam with Prometric or VUE at this moment! 7 Must-Read Selenium Tutorials. Selenium has such a large number of things pulling out all the stops. 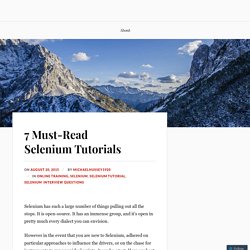 It is open-source. It has an immense group, and it’s open in pretty much every dialect you can envision. However in the event that you are new to Selenium, adhered on particular approaches to influence the drivers, or on the chase for instruments to run your ideal scripts, it can be a test. Here are beat 7 instructional exercises to make your life a little simpler. The main thing you have to do with Selenium is make your scripts (Test Cases). 1) Writing you’re First Test Case In Selenium WebDriver (through Software Testing Mentor) 2) Selenium tutorial For Total Beginners (feature) 3) Creating you’re First Script in Selenium IDE (through Udemy) When you have your essential Selenium script, you have to do a test run, and you may need to examine more mind boggling scripting, for example, becoming acquainted with confirmation just pages.