Nauru data leak paints 'disturbing picture' of refugee abuse, human rights groups say. Updated The leak of a huge archive of files detailing allegations of abuse on Nauru shows the Federal Government has failed to address concerns about the treatment of adults and children in detention, human rights advocates said. 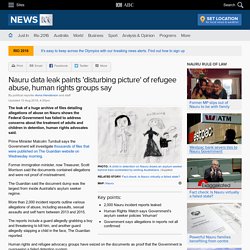 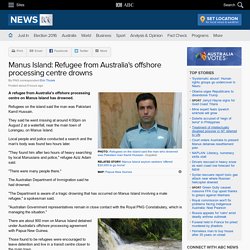 Refugees on the island said the man was Pakistani Kamil Hussain. They said he went missing at around 4:00pm on August 2 at a waterfall, near the main town of Lorengau, on Manus Island. Local people and police conducted a search and the man's body was found two hours later. "They found him after two hours of heavy searching by local Manusians and police," refugee Aziz Adam said. Ministerforimmigrationborderprotectionstatement. Election 2016: How accurate are Peter Dutton's comments on 'illiterate' refugees? Updated The comments made by Immigration Minister Peter Dutton on the dangers of an increased refugee intake have been described as everything from factual to offensive. 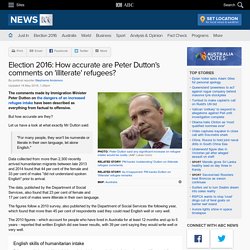 But how accurate are they? Let us have a look at what exactly Mr Dutton said: Lateline - 18/11/2014: Asylum seekers in Indonesia denied entry to Australia. Australian Broadcasting Corporation Broadcast: 18/11/2014 Reporter: Emma Alberici The federal government has moved to stop the flow of asylum seekers through Indonesia by denying those who registered through the UN in Indonesia after the first of July this year the right to resettle in Australia. 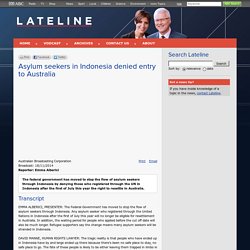 EMMA ALBERICI, PRESENTER: The Federal Government has moved to stop the flow of asylum seekers through Indonesia. Australian Story. Introduced by Caroline Jones This week's program is about a young woman who puts a human face to the issue of "unauthorised" boat arrivals in Australia. 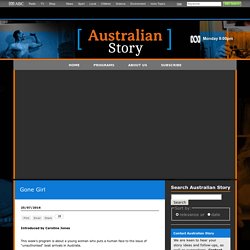 Mojgan Shamsalipoor fled terrible personal trauma in her home country, Iran, and found sanctuary in Brisbane where she was able to live in the community while awaiting a decision on her protection visa. At a youth camp she met a young Iranian refugee, Milad Jafari. Election 2016: Peter Dutton stands by refugee remarks. Updated Immigration Minister Peter Dutton is standing by his comments that many refugees are illiterate. 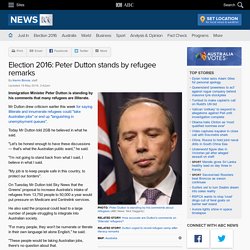 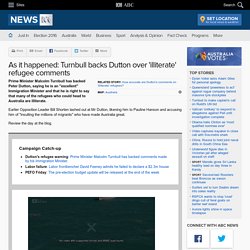 But how accurate are they? Let us have a look at what exactly Mr Dutton said: For many people, they won't be numerate or literate in their own language, let alone English. Data collected from more than 2,300 recently arrived humanitarian migrants between late 2013 and 2014 found that 44 per cent of the female and 33 per cent of males "did not understand spoken English" prior to arrival. AM - Immigration secrecy provisions to be challenged in the High Court 27/07/2016. MICHAEL BRISSENDEN: A High Court challenge is being brought against the Federal Government's immigration detention secrecy provisions. 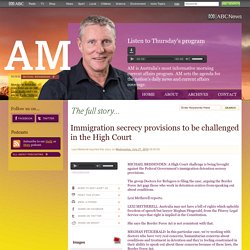 The group Doctors for Refugees is filing the case, arguing the Border Force Act gags those who work in detention centres from speaking out about conditions. Lexi Metherell reports. Lateline - 20/02/2014: China critical of Australias treatment of asylum seekers. Australian Broadcasting Corporation Broadcast: 20/02/2014 Reporter: Stephen McDonell As part of a government to government discussion on human rights Beijing has criticised Australia's treatment of asylum seekers and questioned whether Australia may be illegally repatriating refugees to third countries. 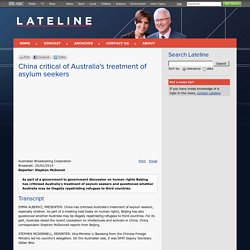 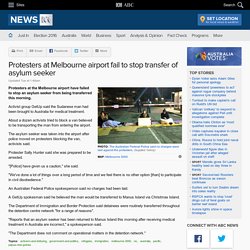 Activist group GetUp said the Sudanese man had been brought to Australia for medical treatment. About a dozen activists tried to block a van believed to be transporting the man from entering the airport. The asylum seeker was taken into the airport after police moved on protesters blocking the van, activists said. Port Moresby Govt sets aside 10 hectare site for West Papuan refugees - Pacific Beat.

Updated The Governor of Port Moresby has told West Papuans refugees to occupy land that has been allocated to them before it is taken by illegal settlers. Powes Parkop says the National Capital District Commission has set aside a 10-hectare site to house thousands of West Papuan refugees, but they have been waiting for the Lands Department to formally issue the new title. Salvaging Justice for Asylum Seekers? Reflections on a Wicked Political Problem – Opinion – ABC Religion & Ethics.

Father Frank Brennan, S.J. is Professor of Law at the Australian Catholic University. There was a very moving scene at the state funeral of Malcolm Fraser in March last year, when Vietnamese Australians thronged outside the church carrying placards which read: "You are forever in our hearts: farewell to our true champion of humanity: Malcolm Fraser. " I honour Fraser, but not because he opened our borders to fleeing boat people coming in their tens of thousands.

He didn't. He secured the borders, and then he led the nation in opening "our arms and hearts to tens of thousands of refugees" as the novelist Tim Winton put it in his Palm Sunday address in Perth last year. PNG Supreme Court adjourns resettlement decision for refugees on Manus Island. By Joy Kisselpar in Port Moresby and staff Posted A court case involving five refugees at the Australian-run detention centre on Manus Island has been adjourned until next week.

Papua New Guinea's Supreme Court was today expected to issue guidelines for the release and resettlement of the detainees. The case has been adjourned until August 2 to allow time for government lawyers to examine the refugees' statements that were submitted in court. Big Scary, Violent Soho, more Laneway bands unite to support asylum seekers. Big Scary have led a stack of ace Aussie artists in taking a united stand against the country's offshore processing of asylum seekers. The Melbourne band have shared a photo taken during the recent Laneway Festival tour featuring Violent Soho, Hermitude, The Smith Street Band, labelmate Airling, Japanese Wallpaper, KUČKA and festival MC Kirin J Callinan, all brandishing signs reading 'Musicians Against Offshore Processing' and '#LetThemStay'. "It felt good to stand together with a bunch of great people and great bands to join the chorus of Australians saying ‪#‎letthemstay," Big Scary wrote on Facebook alongside the image, taken by Sydney photographer Daniel Boud.

"We know it's a complex issue. We know there's no simple solution. A Big Country: Helping migrant women settle in regional centres - ABC Rural. Newcastle praised for preparedness for resettling Syrian refugees. Posted The state's refugee resettlement boss has praised Newcastle's preparedness, ahead of the arrival of more Syrian refugees. New South Wales is set to re-settle around 6,000 people displaced by conflict in war-torn Syria. Around half of them will be adults, and half children. Mojgan Shamsalipoor: Peter Dutton won't intervene in case of Iranian asylum seeker student. Alphonse Mulumba urges media to drop 'refugee' label for 'new Australian' Refugees struggling to find suitable housing in Newcastle call for better support.