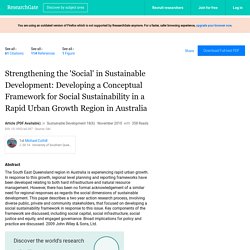 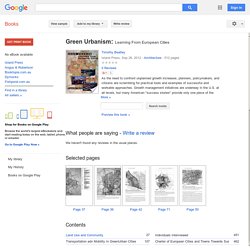 Growth management initiatives are underway in the U.S. at all levels, but many American "success stories" provide only one piece of the puzzle. To find examples of a holistic approach to dealing with sprawl, one must turn to models outside of the United States. In Green Urbanism, Timothy Beatley explains what planners and local officials in the United States can learn from the sustainable city movement in Europe. The book draws from the extensive European experience, examining the progress and policies of twenty-five of the most innovative cities in eleven European countries, which Beatley researched and observed in depth during a year-long stay in the Netherlands. Chapters examine: SlowCities. What we do - Slow Food International. Slow Food works around the world to protect food biodiversity, build links between producers and consumers, and raise awareness of some of the most pressing topics affecting our food system. 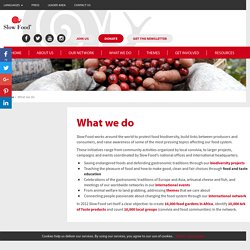 These initiatives range from community activities organized by local convivia, to larger projects, campaigns and events coordinated by Slow Food’s national offices and international headquarters. Saving endangered foods and defending gastronomic traditions through our biodiversity projectsTeaching the pleasure of food and how to make good, clean and fair choices through food and taste educationCelebrations of the gastronomic traditions of Europe and Asia, artisanal cheese and fish, and meetings of our worldwide networks in our international eventsFrom animal welfare to land grabbing, addressing themes that we care aboutConnecting people passionate about changing the food system through our international network. 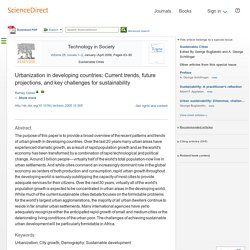 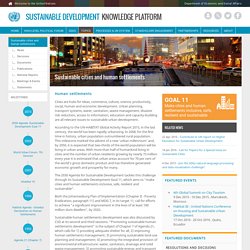 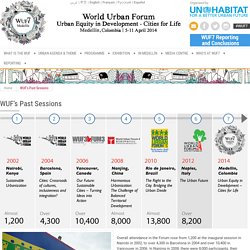 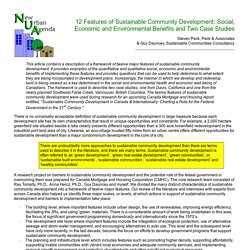 It provides examples of the quantitative and qualitative social, economic and environmental benefits of implementing these features and provides questions that can be used to help determine to what extent they are being incorporated in development plans. Increasingly, the manner in which we develop and redevelop land is being viewed as a key determinant in the social and environmental health and economic well being of Canadians. The framework is used to describe two case studies, one from Davis, California and one from the newly planned Southeast False Creek, Vancouver, British Columbia. The twelve features of sustainable community development were used during research for an upcoming Canada Mortgage and Housing report, entitled, "Sustainable Community Development in Canada & Internationally: Charting a Role for the Federal Government in the 21st Century.

" A Case Study of Sustainable Urban Planning Principles in Curitiba (Brazil) and Their Applicability in Shiraz (Iran) World Development book case study: sustainable urban development in Curitiba. In 2010 the Global Sustainable City Award was given to Curitiba. 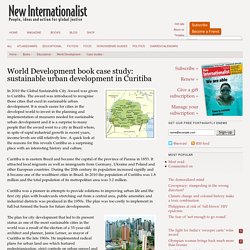 The award was introduced to recognise those cities that excel in sustainable urban development. It is much easier for cities in the developed world to invest in the planning and implementation of measures needed for sustainable urban development and it is a surprise to many people that the award went to a city in Brazil where, in spite of rapid industrial growth in recent years, income levels are still relatively low.

A quick look at the reasons for this reveals Curitiba as a surprising place with an interesting history and culture. BRA. IDFC Investing in Sustainable Cities Paper 01 12 14. Designing Sustainable Cities in the Developing World - Georgia Butina Watson. The World Factbook. ShowIntroduction :: BRAZIL Panel - Collapsed Following more than three centuries under Portuguese rule, Brazil gained its independence in 1822, maintaining a monarchical system of government until the abolition of slavery in 1888 and the subsequent proclamation of a republic by the military in 1889. 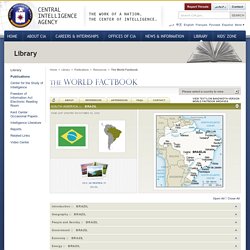 Brazilian coffee exporters politically dominated the country until populist leader Getulio VARGAS rose to power in 1930. By far the largest and most populous country in South America, Brazil underwent more than a half century of populist and military government until 1985, when the military regime peacefully ceded power to civilian rulers. Brazil continues to pursue industrial and agricultural growth and development of its interior. 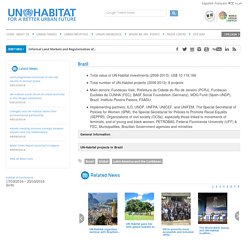 In Aleppo, Syria a worker picks up solid waste through UNDP's emergency employment project providing temporary jobs to people affected by the conflict. Photo: UNDP in Syria Mohammad was one of the Syrian citizens who never thought that the escalating hostilities would force him out of his home. Living in a hard-to-reach area of Aleppo, one of the governorates most affected by the ongoing crisis, his family faced extremely difficult conditions due to the lack of basic goods, the ongoing violence, and the deterioration of health care. “My three-year-old daughter has cancer, and she needs radiotherapy in Damascus which I can’t afford,” he said. Bigger cities don’t have to mean bigger risks. The majority of the world’s population is urban, and it’s easy to understand why: Urban settings often offer better economic opportunities and better access to essential services (such as healthcare and education), as well as a wider variety of entertainment and leisure options.

But urban environments are also uniquely vulnerable to disasters. Many towns, cities, and urban sprawls stand in coastal zones, on riverbanks, or in mountains– settings that are exposed to geological and hydro-meteorological hazards like earthquakes, storm surges, and cyclones. From a tent to a home in Gaza. The thirteen buildings contain 104 units structured to accommodate large families, with an area of 145m2. Standard elements include a basement for each building with a 300m2 area, solar heating system for hot water and electricity and water supplies. To help combat harsh weather conditions, double external walls were installed, in addition to roofing works for the final slab.

The housing project also includes the construction of a school, a mosque, roads, and electricity, water, sewage and communication networks. Cities - United Nations Sustainable Development Action 2015. CitiesFlorencia Soto Nino2016-04-26T15:18:44+00:00 Share this story, choose your platform! Cities are hubs for ideas, commerce, culture, science, productivity, social development and much more. At their best, cities have enabled people to advance socially and economically. However, many challenges exist to maintaining cities in a way that continues to create jobs and prosperity while not straining land and resources. Sdgs eastern africa summary eng. Africa regional report on the sustainable development goals summary english rev.

Titled. Deakin University Library. 2843WESS2013. Tobacco laws in Queensland. Laws in Queensland include smoking bans for indoor and outdoor public places, as well as tough restrictions on the retail advertising, display and promotion of tobacco products. These laws create a culture that: reduces exposure to second-hand smoke supports smokers trying to quitdiscourages children from taking up the habit. Research shows that young people are much less likely to take up smoking if their schools, homes and recreation areas are no-smoking areas. An integrated, sustainable fix is key to solving Africa's energy woes. Fighting income inequality: the role business can play. African cities aren't keeping up with the demand for basic toilets. Chapter 2: Preparing for implementation. SDG%20Implementation%20and%20UNDP Policy and Programme Brief. Getting ready for SDG implementation in Latin America. Chapter 2: Practical tools for getting started with the SDGs.