Informal Meeting Minutes Template. HAZMAT Class 4 Flammable solids. Divisions[edit] Division 4.1: Flammable Solid Flammable solids are any of the following three types of materials: Division 4.2: Spontaneously Combustible Spontaneously combustible material is: Pyrophoric Material: A pyrophoric material is a liquid or solid that, even in small quantities and without an external ignition source, can ignite within five (5) minutes after coming in contact with air when tested according to the UN Manual of Tests and Criteria.Self-Heating Material: A self-heating material is a material that, when in contact with air and without an energy supply, is liable to self-heat. 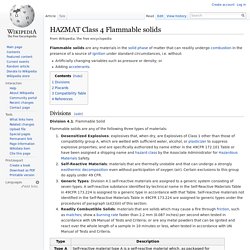 Division 4.3: Dangerous When Wet Dangerous when wet material is material that, by contact with water, is liable to become spontaneously flammable or to give off flammable or toxic gas at a rate greater than 1 liter per kilogram of the material, per hour, when tested in accordance with the UN Manual of Tests and Criteria. Placards[edit] Compatibility Table[edit] References[edit] Hazchem. A tanker carrying Kerosene with a Hazchem plate affixed to the side of the tank. 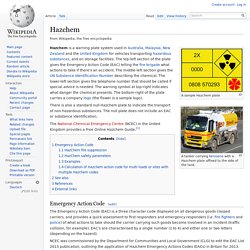 Hazchem is a warning plate system used in Australia, Malaysia, New Zealand and the United Kingdom for vehicles transporting hazardous substances, and on storage facilities. The top-left section of the plate gives the Emergency Action Code (EAC) telling the fire brigade what actions to take if there's an accident. The middle-left section gives the UN Substance Identification Number describing the chemical.

The lower-left section gives the telephone number that should be called if special advice is needed. AIDGC: Dangerous Goods Consultants - Hazardous Chemicals & Chemical Storage. Class 4 - Flammable Solids Substances Liable To Spontaneous Combustion; Substances Which, In Contact With Water, Emit Flammable Gases Class 4 is divided into three divisions as follows: a) Division 4.1 Flammable solids Solids which, under conditions encountered in transport, are readily combustible or may cause or contribute to fire through friction; self-reactive substances which are liable to undergo a strongly exothermic reaction; solid desensitized explosives which may explode if not diluted sufficiently; b) Division 4.2 Substances liable to spontaneous combustion. 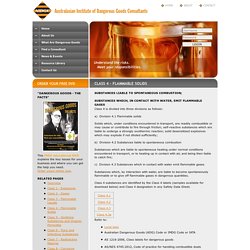 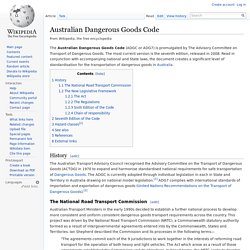 The most current version is the seventh edition, released in 2008. Read in conjunction with accompanying national and State laws, the document creates a significant level of standardisation for the transportation of dangerous goods in Australia. History[edit] The Australian Transport Advisory Council recognised the Advisory Committee on the Transport of Dangerous Goods (ACTDG) in 1970 to expand and harmonise standardised national requirements for safe transportation of Dangerous Goods. (B3155789-31BC-434C-B17E-B0C0A43E6D6B) IMDG Code Compliance Centre. Seed cake is the residue remaining after oil has been expelled mechanically from oil-rearing seeds. 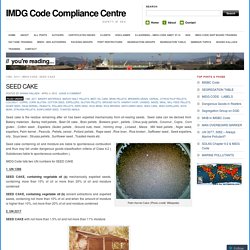 9 Classes of Dangerous Goods. ‘Dangerous goods’ are materials or items with hazardous properties which, if not properly controlled, present a potential hazard to human health and safety, infrastructure and/ or their means of transport. 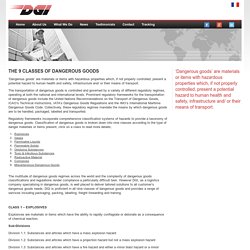 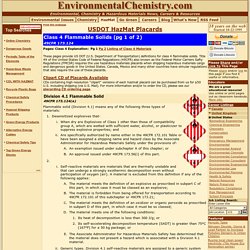 This page may benefit from setting your browser to print background colors. These pages provide US DOT (U.S. Department of Transportation) definitions for class 4 flammable solids. Title 49 of the United States Code of Federal Regulations (49CFR) also known as the Federal Motor Carriers Safty Regulations (FMCSR) requires the use hazardous materials placards when shipping hazardous materials cargo and dangerous goods in the United States. Canada, Mexico and many other countries have simular regulations that also require the use of these placards. 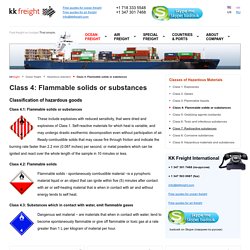 Self-reactive materials for which heat is variable, and may undergo drastic exothermic decomposition even without participation of air. Ready-combustible solids that may cause fire through friction and indicate the burning rate faster than 2.2 mm (0.087 inches) per second, or metal powders which can be ignited and react over the whole length of the sample in 10 minutes or less. GHS Hazardous Chemical Information List (No Search Version) CCV_Revised_Version_Fiskville_Report_Occupational_Cohort_Updated.pdf. 71740-1_c.pdf. Analysisofenvironmentallegislativeandregulatoryrequirementsfortheuseofaminebasedco2pccaustralianpowe.pdf.

China explosion: Fires at Shandong chemical plant. One person has been killed and nine injured after an explosion at a chemical plant in China's eastern Shandong province, state media report. 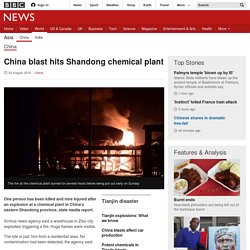 Xinhua news agency said a warehouse in Zibo city exploded, triggering a fire. Huge flames were visible. The site is just 1km from a residential area. No contamination had been detected, the agency said. Earlier this month, blasts involving chemicals killed at least 121 people in the city of Tianjin, further north. Hundreds were injured and 54 are still missing. The proximity of industrial and chemical plants to residential areas has become hugely controversial. Widespread public anger over the deadly explosions in Tianjin has led to promises to improve China's patchy commitment to industrial safety, says the BBC's Celia Hatton in Beijing.

Last week, an inspection of places storing hazardous chemicals in Beijing unearthed safety issues at 85 out of 124 sites, resulting in two emergency factory closures. Watch the moment a fireworks factory explodes in Colombia. Fireworks factory explodes in dramatic display in Colombian town of Granada. Australian-WHS-Strategy-2012-2022.pdf. Hazard labels for dangerous goods. Parliament of Victoria - Interim report presented on Fiskville inquiry. Wednesday, 24 June 2015 11:10 An interim report on the CFA training college at Fiskville has been presented to the Victorian Parliament by the Environment, Natural Resources and Regional Development Committee. 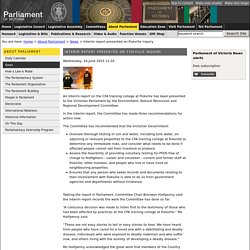 Independent_Monitor_Fiskville_Final_Report_July_2015.pdf. Updated Water at the Country Fire Authority's (CFA) Fiskville training base in western Victoria was allegedly deliberately contaminated as part of a biological experiment, a Victorian parliamentary inquiry has heard. The inquiry is examining claims dozens of firefighters who worked or trained at Fiskville suffered cancers linked to dangerous firefighting chemicals over several decades. Metropolitan Fire Brigade firefighter Mick Tisbury told the inquiry a scientist told him the potentially dangerous bacteria and fire retarding organism, pseudomonas aeruginosa, was added to water at the base as a cheap way to treat hydrocarbons.

"He told me that he was part of an experiment with the CFA where they deliberately introduced pseudomonas aeruginosa into the water supply as a biological way of cleaning up the hydrocarbons in the water," he said. The World Today - Contamination scare at the CFA's beleaguered Fiskville site 03/03/2015. ELEANOR HALL: Victorian firefighters who warned about cancer risks at a CFA (Country Fire Authority) training facility have been vindicated with the State Government closing the site where a dangerous chemical was found in the water supply. The Government has closed the Fiskville facility in western Victoria indefinitely, as Rachael Brown reports. RACHAEL BROWN: Firefighters have long argued Fiskville is the CFA's worst kept secret.

MFB (Metropolitan Fire Brigade) senior station officer Mick Tisbury started investigating the quality of the water in 2012 when recruits reported its odd colour and smell. MICK TISBURY: The more we dug, the scarier it became. Dating back for years there was just report after report after report from external environmental and health organisations all saying that the water is category A industrial waste, it's a matter of urgency, stop using it and clean it out.

Fiskville health and safety investigation, CFA - Country Fire Authority. CFA is committed to providing information to our members and the broader community about the Fiskville investigation, its associated reports and inquiries. The organisation has acted on more than 100 recommendations from three reports into Fiskville and other regional training grounds, an environmental audit and its own Board’s initiatives.

Following the elevated on-site PFOS test results, which led to the closure of Fiskville in March 2015, CFA has broadened those eligible for a health check to include the following groups who attended Fiskville and consider they might be at risk or have concerns: Career and volunteer members involved in practical firefightingOther CFA employees and residentsStudents, teachers and trainees including personnel from organisations other than the CFA, e.g. VicSES, Parks Victoria, etc.Persons from off-site including neighbours and contractors who regularly attended Fiskville.

Fiskville inquiry: Allegations water 'deliberately contaminated' at Victorian firefighting training base. CFA Fiskville claims. Background In 1971 the CFA established its Fiskville Training College as a training site for firefighters around the state. The site provided a number of facilities for live fire drills, classroom-based firefighting training, and housed a number of permanent and temporary staff and volunteers.

In 2011, following investigations by the Herald Sun, serious questions emerged concerning the safety and management practices employed at Fiskville between the 1970s and 1990s, in relation to the sourcing, use and disposal of hazardous substances in training exercises. Fiskville independent report summary (Part 1) Fiskville independent report summary (Part 2) Fiskville EPA report released - Country Fire Authority. Residues from the historical use of firefighting foams present in and around CFA Training College Fiskville pose a low and acceptable risk to workers, trainees, visitors and residents, according to an environmental audit released today.

The EPA-appointed Environmental Auditor reviewed all reports and testing conducted over the past two years, including conducting his own tests, into possible contamination of water and soil at Fiskville as a result of past firefighter training practices. This audit report was a requirement of notices issued to CFA by the Environment Protection Authority (EPA) in 2013. CFA CEO Mick Bourke said the results of the audit would be welcomed by all CFA members.

Listen to Mick Bourke speak with ABC Statewide Drive host Nicole Chvastek: >> Report-of-the-Independent-Fiskville-Investigation. Resultat av Googles bildsökning efter. No Cookies. The training college at Fiskville will be closed forever after safety concerns. Source: News Limited. CFA Board - Country Fire Authority. Google Image Result for. Wyniki Szukania w Grafice Google dla. 2009 VBRC - Final Report - Vol 2 - Organisational Structure. The structure of Victoria’s fire agencies is of long standing. The Department of Sustainability and Environment has links to the early 1900s, when its equivalent was the Department of State Forests. Firefighting brigades, representing the interests of municipalities, insurance companies and businesses, have been working in fire suppression throughout metropolitan Melbourne since 1845, and volunteer bushfire brigades have been working to suppress fires in rural and regional Victoria since 1926.

Approved Code of Practice for the Storage and Handling of Dangerous Goods (28/06/2006) Dangerous & Flammable Goods Storage Cabinets. Battery Fires Reveal Risks of Storing Large Amounts of Energy. People still need electricity when the wind isn't blowing and the sun isn't shining, which is why renewable energy developers are increasingly investing in energy storage systems. They need to sop up excess juice and release it when needed. NationalStandard_StorageHandling_WorkplaceDangerousGoods_NOHSC-10152001_PDF.pdf.

UN Recommendations on the Transport of Dangerous Goods. About the Recommendations - Transport. 3. The scope of the Model Regulations should ensure their value for all who are directly or indirectly concerned with the transport of dangerous goods. Safely-Transporting-Dangerous-Goods.compressed.pdf. Code-of-Practice-for-the-Storage-and-Handling-of-Dangerous-Goods. Class 4 flammable solids regulation. WHS/OH&S Acts, Regulations and Codes of Practice. InShare7. Australian-WHS-Strategy-1st-Progress-Report.pdf. Integrated hazardous materials management: Combining requirements from various environmental legislations to enable effective business compliance processes in industries - Springer. Enhanced global trade forces companies to comply with a variety of environmental legislations each being subject to continuous modifications.

In this paper we introduce a highly applicable process aiming to ensure compliance with various hazardous substances regulations that has been tested successfully in over 70 companies of different industries in Germany. Journal of Applied Law and Policy - Harmonising Occupational Health and Safety Regulation in Australia: The First Report of the National OHS Review. 82837E28-996D-420F-8592-F01FA147E049.pdf. CFA Values and behaviours - Country Fire Authority. Johnstone_78218_accepted_version.pdf.