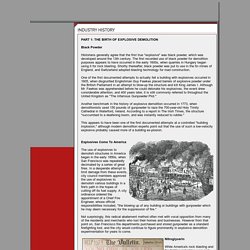 The first recorded use of black powder for demolition purposes appears to have occurred in the early 1600s, when quarries in Hungary began using it for rock blasting. Shortly thereafter, black powder was put to use in the tin mines of England, and Switzerland adopted blasting technology for road construction. One of the first documented attempts to actually fell a building with explosives occurred in 1605, when disgruntled Englishman Guy Fawkes placed barrels of explosive powder under the British Parliament in an attempt to blow-up the structure and kill King James I.

Although Mr. Coorong fishers fear industry will disappear as SA Government considers seal management plan. Posted Fishermen from the Coorong on South Australia's south-east coast have warned the industry could collapse while the State Government works on ways to manage booming seal numbers. 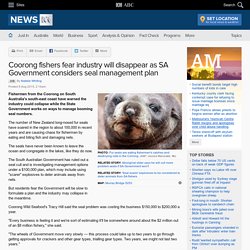 The number of New Zealand long-nosed fur seals have soared in the region to about 100,000 in recent years and are causing chaos for fishermen by eating and biting fish and damaging nets. The seals have never been known to leave the ocean and congregate in the lakes, like they do now. The South Australian Government has ruled out a seal cull and is investigating management options under a $100,000 plan, which may include using "scarer" explosives to deter animals away from nets. But residents fear the Government will be slow to formulate a plan and the industry may collapse in the meantime. Security risks and probabilistic risk assessment of glazing subject to explosive blast loading. Centre for Infrastructure Performance and Reliability, School of Engineering, The University of Newcastle, Callaghan, NSW 2308, Australia Received 1 July 2006, Revised 28 February 2007, Accepted 11 March 2007, Available online 15 March 2007 Choose an option to locate/access this article: Check if you have access through your login credentials or your institution Check access doi:10.1016/j.ress.2007.03.007. 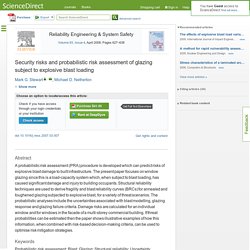 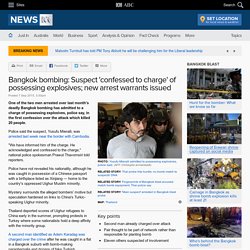 Police said the suspect, Yusufu Mieraili, was arrested last week near the border with Cambodia. "We have informed him of the charge. He acknowledged and confessed to the charge," national police spokesman Prawut Thavornsiri told reporters. Key points Second man already charged over attackPair thought to be part of network rather than responsible for planting bombEleven others suspected of involvement Police have not revealed his nationality, although he was caught in possession of a Chinese passport with a birthplace listed as Xinjiang — home to the country's oppressed Uighur Muslim minority.

Explosives and Fireworks - Department of Mines and Petroleum. Guidance material related to explosives and fireworks including codes of practice, guidelines, schedule of fireworks events and registration of explosives magazines. 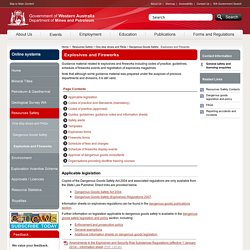 Note that although some guidance material was prepared under the auspices of previous departments and divisions, it is still valid. Copies of the Dangerous Goods Safety Act 2004 and associated regulations are only available from the State Law Publisher. Direct links are provided below. 50 dead, dozens missing in China blast. Chinese authorities are struggling to extinguish fires and identify dangerous chemicals at a devastated industrial site, two days after giant explosions killed dozens and left residents in fear of a toxic cloud. 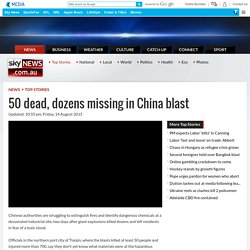 Officials in the northern port city of Tianjin, where the blasts killed at least 50 people and injured more than 700, say they don't yet know what materials were at the hazardous goods storage facility that exploded, or the cause of the blast. Chinese media say at least 700 tonnes of sodium cyanide were at the site, along with other dangerous substances, and the poisonous chemical have been detected in nearby drains. Two huge explosions tore through the industrial area where chemicals and gas were stored in the northeast Chinese port city of Tianjin Authorities also said they have lost contact with 36 firefighters at the scene and 12 of them have been confirmed as among the dead. They were among more than 1,000 firefighters sent to fight the flames. New police dog centre opens in Brisbane. One of Brisbane's most elite police teams uses its specialist training to find more than 400 ecstasy tablets and uncover about $2000 in suspicious money on average every day. 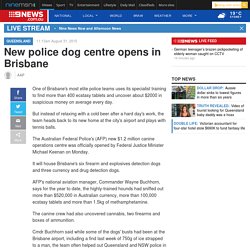 But instead of relaxing with a cold beer after a hard day's work, the team heads back to its new home at the city's airport and plays with tennis balls. The Australian Federal Police's (AFP) new $1.2 million canine operations centre was officially opened by Federal Justice Minister Michael Keenan on Monday. It will house Brisbane's six firearm and explosives detection dogs and three currency and drug detection dogs. AFP's national aviation manager, Commander Wayne Buchhorn, says for the year to date, the highly-trained hounds had sniffed out more than $520,000 in Australian currency, more than 100,000 ecstasy tablets and more than 1.5kg of methamphetamine.

The canine crew had also uncovered cannabis, two firearms and boxes of ammunition. It's the fifth canine operations centre to be opened at Australia's major airports. Syria crisis: Latakia blast rocks Assad stronghold. Image copyright AFP At least 10 people have been killed in a bomb attack in the Syrian city of Latakia, a key stronghold of President Bashar al-Assad, state media report. 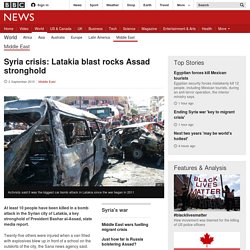 Twenty-five others were injured when a van filled with explosives blew up in front of a school on the outskirts of the city, the Sana news agency said. State television aired footage of charred cars with blown-out windows. Latakia has largely escaped the conflict that has devastated most of Syria and left 250,000 people dead. But a rebel alliance that includes al-Qaeda's local affiliate, al-Nusra Front, has been advancing on the city and within its surrounding province after driving government forces out of much of neighbouring Idlib province earlier this year. Is it legal for Australia to bomb Syria? Five facts you need to know. The Abbott government confirmed on Wednesday that it plans to extend airstrikes into Syria against Islamic State targets. 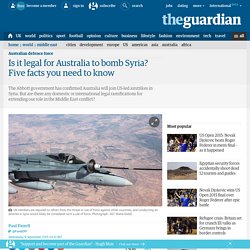 The national security committee met on Tuesday to approve a plan to conduct the aerial operations. The attorney general, George Brandis, has made assurances the airstrikes would be legal because Isis “conducts aggressive attacks on Iraq from bases within Syria … and we are at war with Isil on behalf of the people and constitutional government of Iraq”. (Isil is Brandis’s preferred term for Islamic State.) But can the Australian government just start bombing Syria, and are there domestic or international legal concerns? Here are five key facts about our plan to bomb Syria. 13-hour siege over, shots fired, hostage freed in Bunbury, Western Australia. Situation ... 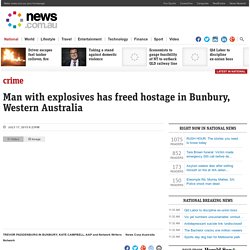 Police overlook a protester who seems to have taken a hostage. Picture: Twitter TREVOR PADDENBURG IN BUNBURY, KATE CAMPBELL, AAP and Network WritersNews Corp Australia Network THE man at the centre of the Bunbury siege — which ended peacefully after nearly 13 hours — has a history of mental illness and was allegedly on the run from a Perth psychiatric hostel. Mine explosives stolen from WA mine site were intended to be sold to outlaw bikies: Perth court. Police charged three people on Tuesday in relation to the theft and transport of $170,000 worth of Senatel Magnum emulsion explosives from Higginsville gold mine near Kambalda.

It is alleged Joshua James Preece, 23, organised with Robert Ivan Crinall, 26, to take 152 cartridges of the explosives from the mine. Police prosecutors told Magistrate Richard Bayly that Mr Preece was a former employee of Australian Contract Mining at Higginsville, but was recently dismissed after he was banned from flying with Virgin Australia for six months. Police will allege Mr Preece and Mr Crinall exchanged text messages to organise the theft from the mine site, with Mr Crinall hiding the explosives. ​How To Fight Fire With Nuclear Bombs. Australian Institute of Criminology - Arson. Home » Crime types » Property Crime » Arson Arson involves intentionally and maliciously destroying or damaging property by using fire. In the case of bushfires, AIC research indicates that Australia has an average of 52,000 bushfires a year with possibly half being either deliberately lit or suspicious.

As part of its extensive research on this crime, the AIC has developed a comprehensive bushfire arson prevention handbook to help reduce the number of deliberately lit fires in Australia. Within the definition of arson there are four core elements: the lighting of fire - fire is the fundamental element of arson; if there is no fire lit, there is no arson (some legal definitions also include lighting explosives); intention or wilfulness - excludes fires started by natural causes or accidents; malice - excludes fires started intentionally with positive or legitimate intent; and property - there must be some kind of property or object that is burned. Explosives Training Australia website. Explosive tracking system. The term ‘intelligent software’ has long been bandied about all too frequently to describe the latest gadgets and software advancements. The last 10 years have seen technological improvements in everything from automation in drill rigs, to self diagnostic systems in minesite vehicles.

Radio Frequency Identification Device (RFID) technology has also undergone an overhaul in recent years. The rapid progression in this area has some using the term once more, however, this time it might just be warranted. Using RFID tags, mining companies can keep their eye firmly locked on the prize, tracking the progress of explosives from ordering through delivery and onto final detonation. By using RFID technology, mining companies can provide safe storage, security, tracking and regularity compliance in the use of explosives.

The new WHS Regulations cover workplace hazardous substances and dangerous goods under a single framework for hazardous chemicals and introduce a new hazard classification and hazard communication system based on the United Nations’ Globally Harmonised System of Classification and Labelling of Chemicals (GHS). Transitional arrangements are in place to ensure a smooth transition to the new classification, SDS and labelling requirements.

What are hazardous substances? Hazardous substances are those that, following worker exposure, can have an adverse effect on health. Blasting evolving from an art to a science. 9 Classes of Dangerous Goods. ‘Dangerous goods’ are materials or items with hazardous properties which, if not properly controlled, present a potential hazard to human health and safety, infrastructure and/ or their means of transport. Blasting explosives user license - NSW Resources and Energy. Journal Article on Explosives in Mines: France. Explosives Companies in Australia - Manta. Explosives and Water Quality: A US Journal Article.