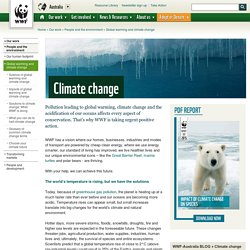 That’s why WWF is taking urgent positive action. WWF has a vision where our homes, businesses, industries and modes of transport are powered by cheap clean energy, where we use energy smarter, our standard of living has improved, we live healthier lives and our unique environmental icons – like the Great Barrier Reef, marine turtles and polar bears - are thriving. With your help, we can achieve this future. Climate change a massive threat to food security, agriculture. Australia's carbon budget to be exhausted in six years, Stockholm group says. Australia will burn through its "fair share" of carbon within six years if the more-ambitious end of the global warming goals agreed to at the Paris climate summit is to be achieved, a respected European think-tank says. 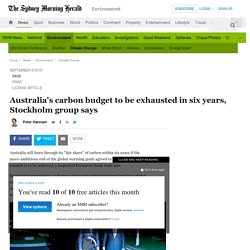 Restricting warming to 1.5 degrees above pre-industrial times implies a global carbon budget of less than 250 billion tonnes of carbon-dioxide equivalent from 2015, the Stockholm Environment Institute said in a new study. The planet has warmed about 1 degree in the past century alone. Climate Change in Australia. Yellow fever vaccination campaign in Democratic Republic of the Congo: Logistics pathway. The biggest emergency yellow fever vaccination campaign ever held in Africa is underway in Democratic Republic of the Congo. 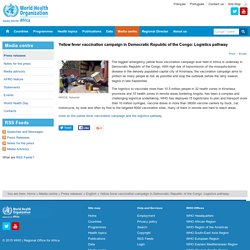 With high risk of transmission of the mosquito-borne disease in the densely populated capital city of Kinshasa, the vaccination campaign aims to protect as many people at risk as possible and stop the outbreak before the rainy season begins in late September. The logistics to vaccinate more than 10.5 million people in 32 health zones in Kinshasa provinces and 15 health zones in remote areas bordering Angola, has been a complex and challenging logistical undertaking. WHO has deployed 15 logisticians to plan and transport more than 10 million syringes, vaccine doses in more than 38000 vaccine carriers by truck, car, motorcycle, by boat and often by foot to the targeted 8000 vaccination sites, many of them in remote and hard to reach areas. 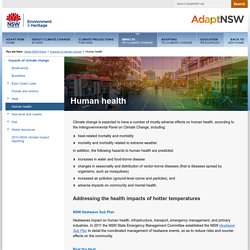 In addition, the following hazards to human health are predicted: increases in water and food-borne disease changes in seasonality and distribution of vector-borne diseases (that is diseases spread by organisms, such as mosquitoes) increased air pollution (ground-level ozone and particles), and adverse impacts on community and mental health. GCHA CAHA Media Advisory WGII Australia 040414. NBv20n2. Agroforestry and our role. About agroforestry Trees play a crucial role in almost all terrestrial ecosystems and provide a range of important products and services to rural and urban people. 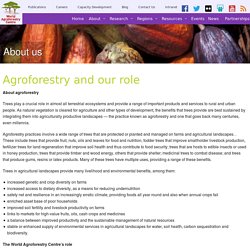 As natural vegetation is cleared for agriculture and other types of development, the benefits that trees provide are best sustained by integrating them into agriculturally productive landscapes — the practice known as agroforestry and one that goes back many centuries, even millennia. Agroforestry practices involve a wide range of trees that are protected or planted and managed on farms and agricultural landscapes. . Trees in agricultural landscapes provide many livelihood and environmental benefits, among them: Sydney weather, heatwave: How to survive 40C temperatures. Loaded: 0% Progress: 0% Heatwaves are a normal part of Australian summer, but how do they form? 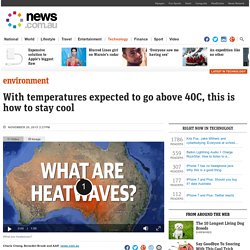 And how severe can they get? Produced by Ashley Leal Beachgoers making the most of the heatwave at Manly Cove beach. THEY are calling it Fryday and Sydney’s heatwave is already cooking. Penrith was the first suburb to hit 40 degrees at 12.30pm, with temperatures expected to reach 41 degrees in the CBD on Friday, which could make it the hottest November day since 1982. Temperatures at Observatory Hill near the Sydney Harbour Bridge shot up by 7 degrees in 10 minutes when westerly winds arrived about 1.50pm. The temperature is currently sitting around 40.8 degrees and needs to reach 41.8 degrees to match the November record. Nasa: Earth is warming at a pace 'unprecedented in 1,000 years' The planet is warming at a pace not experienced within the past 1,000 years, at least, making it “very unlikely” that the world will stay within a crucial temperature limit agreed by nations just last year, according to Nasa’s top climate scientist. 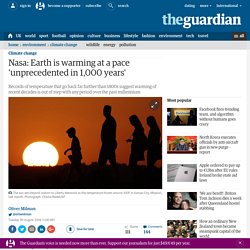 This year has already seen scorching heat around the world, with the average global temperature peaking at 1.38C above levels experienced in the 19th century, perilously close to the 1.5C limit agreed in the landmark Paris climate accord. July was the warmest month since modern record keeping began in 1880, with each month since October 2015 setting a new high mark for heat. But Nasa said that records of temperature that go back far further, taken via analysis of ice cores and sediments, suggest that the warming of recent decades is out of step with any period over the past millennium.

“In the last 30 years we’ve really moved into exceptional territory,” Gavin Schmidt, director of Nasa’s Goddard Institute for Space Studies, said. Climate change will mean the end of national parks as we know them. After a century of shooing away hunters, tending to trails and helping visitors enjoy the wonder of the natural world, the guardians of America’s most treasured places have been handed an almost unimaginable new job – slowing the all-out assault climate change is waging against national parks across the nation. 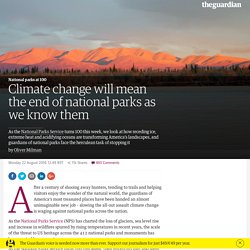