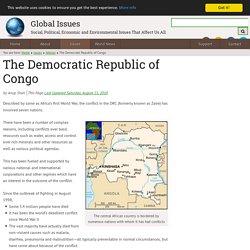 The central African country is bordered by numerous nations with whom it has had conflicts There have been a number of complex reasons, including conflicts over basic resources such as water, access and control over rich minerals and other resources as well as various political agendas. This has been fueled and supported by various national and international corporations and other regimes which have an interest in the outcome of the conflict. Since the outbreak of fighting in August 1998, These shocking figures would usually be more than enough to get media attention the world over, especially if it were to threaten influential nations in some way. Brief Background As with most conflicts in Africa, the current situation has much to do with the legacy of colonialism. . — William D. Back to top Struggle for Political Power.

Climate change linked to spread of disease. Climate change is emerging as a major threat to health and adding pressure on public health systems, especially in Africa, a senior UN official has said. 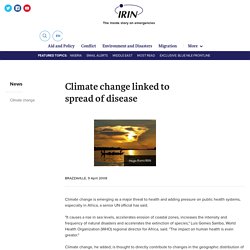 "It causes a rise in sea levels, accelerates erosion of coastal zones, increases the intensity and frequency of natural disasters and accelerates the extinction of species," Luis Gomes Sambo, World Health Organization (WHO) regional director for Africa, said. "The impact on human health is even greater. " Climate change, he added, is thought to directly contribute to changes in the geographic distribution of vector-borne diseases such as malaria and epidemics of meningococcal meningitis, Rift Valley fever and cholera in previously unaffected areas. "For example, the geographic distribution of meningococcal meningitis appears to be expanding from the usual meningitis belt to the southern African region," Sambo said on 7 April during the commemoration of World Health Day in Brazzaville, capital of the Republic of Congo. lmm/aw/eo/mw. 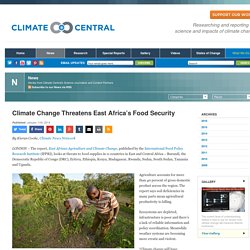 Agriculture dominates the economies of countries in East Africa: if plans aren’t made to adapt to climate change the region’s rapidly expanding population faces a grim future, says a new report. Credit: Flickr/CGIAR Climate Agriculture accounts for more than 40 percent of gross domestic product across the region. The report says soil deficiencies in many parts mean agricultural productivity is falling. Ecosystems are depleted, infrastructure is poor and there’s a lack of reliable information and policy coordination. Bleak Prospect Crop production across the region depends overwhelmingly on rainfall.

NASA predicts that if current deforestation levels proceed, the world's rainforests may be completely in as little as 100 years. There are many causes of deforestation. Some other common reasons are: Conservation. Uman activities have taken a heavy toll on our environment. 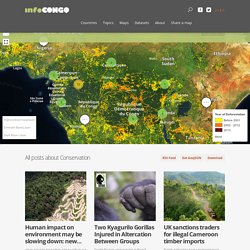 But there may be some hope, researchers say. Although human... Gorilla Doctors veterinarians in Bwindi National Park are keeping a close eye on two gorillas from the Kyaguliro group... British authorities have sanctioned more than a dozen UK importers sourcing wood from Cameroon. Illegal logging is a growing... Sactual Republic of Congo in the framework of the UNFCCC COP 21.