Cambodia. Tested new rice locally As part of the Cambodia-IRRI-Australia Project, IRRI tested more than 1,500 rice varieties and breeding lines in Cambodia between 1989 and 1996, previously no such testing had ever occurred. 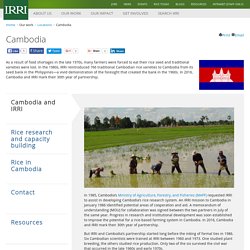 Following this, Cambodia approved the release of 21 rice varieties, which had 25% higher yields than local varieties. Conservation of traditional Cambodian rice As a result of food shortages in the late 1970s, many Cambodian farmers were forced to eat their rice seed and traditional varieties were lost. In the 1980s, IRRI reintroduced 766 traditional Cambodian rice varieties to Cambodia from IRRI’s International Rice Genebank. Identified local rice pests In 1994, IRRI started an Integrated Pest Management program in Cambodia to collect pests and gather data to understand the damage they can do to rice fields. Improved postharvest management In collaboration with Nong Lam University, IRRI also helped to introduce combine harvesters and flat bed dryers to Cambodia. Mechanization. Cambodia. Cambodia. Cambodia. Cambodia. Cambodia ( i/kæmˈboʊdiə/;[8] Khmer: កម្ពុជា, Kampuchea, IPA: [kɑmˈpuˈciə]), officially known as the Kingdom of Cambodia (Khmer: ព្រះរាជាណាចក្រកម្ពុជា, Preăh Réachéanachâk Kâmpŭchéa) and once known as the Khmer Empire, is a country located in the southern portion of the Indochina Peninsula in Southeast Asia. 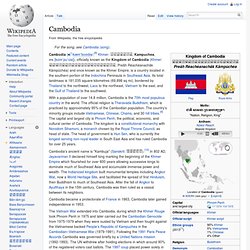 Its total landmass is 181,035 square kilometres (69,898 sq mi), bordered by Thailand to the northwest, Laos to the northeast, Vietnam to the east, and the Gulf of Thailand to the southwest. Cambodia's ancient name is "Kambuja" (Sanskrit: कंबुज).[10] In 802 AD, Jayavarman II declared himself king marking the beginning of the Khmer Empire which flourished for over 600 years allowing successive kings to dominate much of Southeast Asia and accumulate immense power and wealth. The Indianized kingdom built monumental temples including Angkor Wat, now a World Heritage Site, and facilitated the spread of first Hinduism, then Buddhism to much of Southeast Asia.

Name[edit] History[edit] Modern Cambodia. After the fall of the Pol Pot regime of Democratic Kampuchea, Cambodia was under Vietnamese occupation and a pro-Hanoi government, the People's Republic of Kampuchea was established. 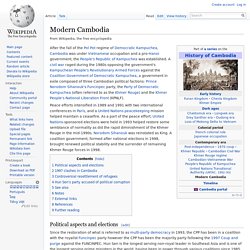 A civil war raged during the 1980s opposing the government's Kampuchean People's Revolutionary Armed Forces against the Coalition Government of Democratic Kampuchea, a government in exile composed of three Cambodian political factions: Prince Norodom Sihanouk's Funcinpec party, the Party of Democratic Kampuchea (often referred to as the Khmer Rouge) and the Khmer People's National Liberation Front (KPNLF). Peace efforts intensified in 1989 and 1991 with two international conferences in Paris, and a United Nations peacekeeping mission helped maintain a ceasefire. As a part of the peace effort, United Nations-sponsored elections were held in 1993 helped restore some semblance of normality as did the rapid diminishment of the Khmer Rouge in the mid-1990s. 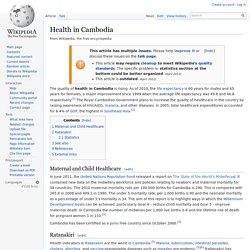 As of 2010, the life expectancy is 60 years for males and 65 years for females, a major improvement since 1999 when the average life expectancy was 49.8 and 46.8 respectively.[1] The Royal Cambodian Government plans to increase the quality of healthcare in the country by raising awareness of HIV/AIDS, malaria, and other diseases. In 2005, total healthcare expenditures accounted for 6.4% of GDP, the highest in Southeast Asia.[2] Maternal and Child Healthcare[edit] Demographics of Cambodia. This article is about the demographic features of the population of Cambodia, including population density, ethnicity, education level, health of the populace, economic status, religious affiliations and other aspects of the population. 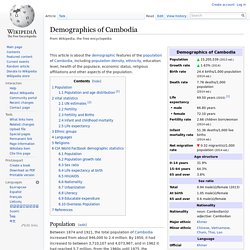 Population[edit] Between 1874 and 1921, the total population of Cambodia increased from about 946,000 to 2.4 million. Ethnic groups in Cambodia. CDC Global Health - Cambodia. Politics of Cambodia. The politics of Cambodia takes place in a frame work of a constitutional monarchy, where by the Prime Minister is the head of government and a Monarch is head of state. 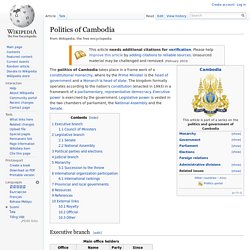 The kingdom formally operates according to the nation's constitution (enacted in 1993) in a framework of a parliamentary, representative democracy. Executive power is exercised by the government. Corruption in Cambodia. Examples of areas where Cambodians encounter corrupt practices in their everyday lives include obtaining medical services, dealing with alleged traffic violations, and pursuing fair court verdicts. 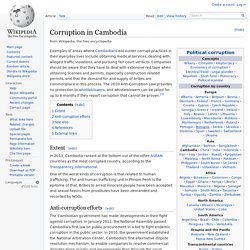 Companies should be aware that they have to deal with extensive red tape when obtaining licenses and permits, especially construction related permits, and that the demand for and supply of bribes are commonplace in this process. The 2010 Anti-Corruption Law provides no protection to whistleblowers, and whistleblowers can be jailed for up to 6 months if they report corruption that cannot be proven.[1] Extent[edit] In 2013, Cambodia ranked at the bottom out of the other ASEAN countries as the most corrupted country, according to the Transparency International. One of the worst kinds of corruption is that related to human trafficking. Anti-corruption efforts[edit] The Cambodian government has made developments in their fight against corruption.