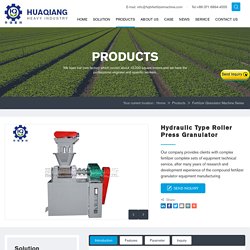 It uses the process that has no drying , and granulating at room temperature, forming at once, it also has the less investment, quick results and good economic returns. 2. It uses the small power and reliable operation, there has no waste discharge, stable operation, convenient maintenance, reasonable layout, advanced technology and low production cost. Flat-die pelleting machine. 1.The produced particles are cylindrical. 2.Organic content can be as high as 100%, which achieves the goal of pure organic granulation. 3.No adhesive is needed during granulation due to the principle that the organic particles can be mosaic with each other to grow bigger in a certain force. 4.The particles are strong, it can be immediately screened after granulation, which can reduce the drying rate and energy consumption. 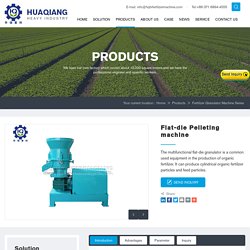 Double die pelleting machine. 1.The machine is mainly used for pellet processing of (bio) organic fertilizer, compound fertilizer and aquaculture processing industry. 2.The granular material processed by this machine has a smooth surface, moderate hardness, low temperature rise in the processing process and can keep the nutrients inside the raw material better. 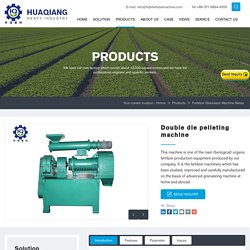 The mixer and the granulation machine are three in one. At the same time, the material is stirred second times at the same time, and the feeder is equipped with the governor and in the production. According to the material dry and humidity adjusting feed quantity, the main engine is not stuck or useless. The main unit integrates the modules, which is equivalent to the work of granulating machines. New Type Stirring Tooth-Drum Granulator. The first section of the housing is split type assembly without lifting device or manual dismantling. 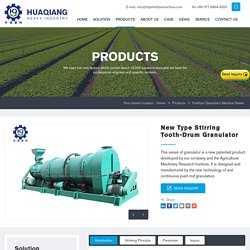 It is easy to clean the inner wall of the shell. Operation principle: first, the material enters the first granulation section from the uniform feeding part (through the speed regulating feed volume) and prepare for granulation through high speed and adjustable mixing knife, then push to the second granulation section. Disc Granulator,Pan Granulator. The main motor drives the pulley and the belt to drive the pinion through the reducer, and the pinion is mutually engaged with the large gear fixed on the bottom of the disc, and works in opposite directions. 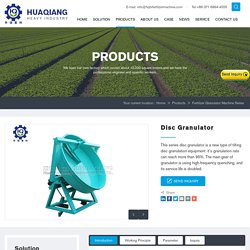 The big gear are specially designed to fit on the spindle mounted on the rack adjustment disc to support the work of the entire granulator (used in conjunction with the sprayer). After entering the granulation tray, the material is continuously rotated and sprayed by the granulation plate to make the material stick together to form spherical pellets. We have designed an automatic cleaning device in the upper part of the pilling disc to prevent the material sticking to the wall, thus greatly improving the service life of the disc granulator. Which manufacturer is better for the roller granulator? The double roller granulator is the main equipment in the compound fertilizer production line. 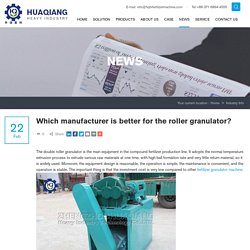 It adopts the normal temperature extrusion process to extrude various raw materials at one time, with high ball formation rate and very little return material, so it is widely used. Moreover, the equipment design is reasonable, the operation is simple, the maintenance is convenient, and the operation is stable. The important thing is that the investment cost is very low compared to other fertilizer granulator machine. Advantages of Zhengzhou Huaqiang Heavy Industry Technology Co., Ltd. roller granulator:

How to control the moisture in the operation of the drum granulator. Drum granulator is a granulator machine for fertilizer that can manufacture materials into specific shapes. 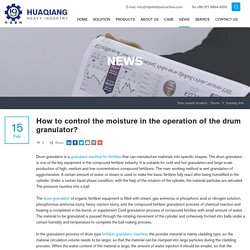 The drum granulator is one of the key equipment in the compound fertilizer industry. It is suitable for cold and hot granulation and large-scale production of high, medium and low concentration compound fertilizers. The main working method is wet granulation of agglomerates. A certain amount of water or steam is used to make the basic fertilizer fully react after being humidified in the cylinder. Compound fertilizer equipment granulation production line. The difference between roller granulator and disc granulator. Fertilizer Granulator Machine Series. Rotary Drum Granulator. 1.The balling rate is 70%, with small amount of return material, small size of feed back and can be re-granulation; 2.By steam heating, it can improve the temperature of material, so that the water is low after ball forming, thus improve the drying efficiency; 3.Using rubber engineering plastics as lining, the raw materials are not easy to stick, and play a role of anti-corrosion and thermal insulation. 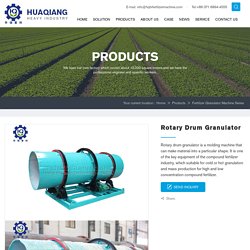 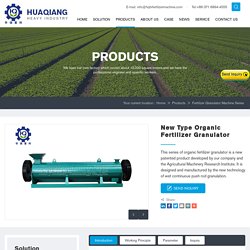 The working principle of the new type organic fertilizer granulation machine is that the material enters the machine from one end of the body, which is continuously propelled by the granulation rotor and mechanically moving with the shell to achieve the purpose of granulation, and the finished particles are pushed out on the other end of the body. The rotor is driven by the motor and reducer of the transmission part. The transmission part and the body part are mostly fixed on the same frame. Roller Press Granulator. The belt is driven by an electric motor, and the transmission belt is transmitted to a pair of two high pressure rollers with sliding housing through the reducer to do relative work. 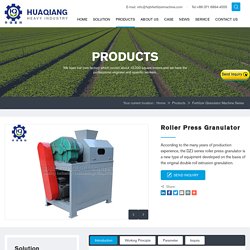 The two rollers of the DZJ-I extruder interact with the relative work of the open gear, and the two roll of the DZJ-II extruder is directly driven by two output axes on a special reducer to achieve the purpose of extrusion molding. When the raw material is produced, the raw material enters into the hopper, and is extruded and molded through the high-pressure roller body, and then flows to the broken molding workshop of the lower part of the roller body after demolishing.