10 ways humans will leave fossils. Updated Imagine if humans overnight simultaneously vanished from the face of the Earth. 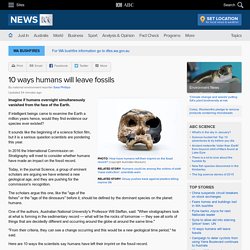 If intelligent beings came to examine the Earth a million years hence, would they find evidence our species ever existed? It sounds like the beginning of a science fiction film, but it is a serious question scientists are pondering this year. In 2016 the International Commission on Stratigraphy will meet to consider whether humans have made an impact on the fossil record. Today, in the journal Science, a group of eminent scholars are arguing we have entered a new geological age, and they are pushing for the commission's recognition. The scholars argue this one, like the "age of the fishes" or the "age of the dinosaurs" before it, should be defined by the dominant species on the planet: humans.

"From their criteria, they can see a change occurring and this would be a new geological time period," he said. Here are 10 ways the scientists say humans have left their imprint on the fossil record. 1. 2. 3. 4. 5. Iceman. 'Hobbits' found on Flores island are not Homo sapiens, but mystery remains. Updated Diminutive humans who died out on an Indonesian island some 15,000 years ago were not Homo sapiens but a different species, according to a study that dives into a fierce anthropological debate. 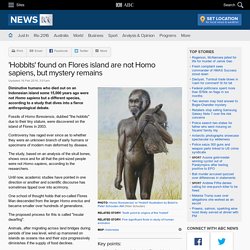 Key points: Homo floresiensis found on Flores island are not Homo sapiensIn a new approach, researchers used high-tech tools to examine their skullsResults found minor maladies but no genetic diseasesInconclusive whether 'hobbits' are small Homo erectus or its own species Fossils of Homo floresiensis, dubbed "the hobbits" due to their tiny stature, were discovered on the island of Flores in 2003. Controversy has raged ever since as to whether they were an unknown branch of early humans or specimens of modern man deformed by disease. New species of ancient tropical flower found in amber from the Dominican Republic - Science. Updated The discovery of a new species of ancient flower beautifully preserved in amber indicates that ancestors of today's daisies, mints and tomatoes flourished in Caribbean jungles up to 45 million years ago. 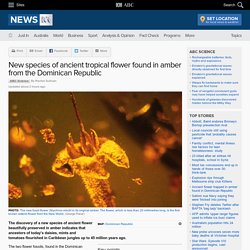 Key points Flower fossils in two separate pieces of amber from Cordillera Septentrional mountains.First flowers from the asterid group in New World amber.New species is ancient relative of daisies, sunflower, mints, coffee and tomatoes The two flower fossils, found in the Dominican Republic, will help scientists understand how asterids — one of the world's three major evolutionary groups of flowering plants — spread around the globe. The amber formed sometime between 15 and 45 million years ago in a geological period known as the mid-tertiary, long before the Americas were joined by the Panama land bridge. The new flower, described in the journal Nature Plants, belongs to the Loganiaceae family, a relatively small family of subtropical and tropical herbs, shrubs, trees and vines. 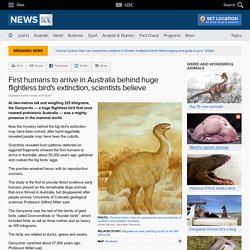 The Genyornis Lived 1.8 million to 40,000 years agoFlightless bird, taller and heavier than the modern-day emuCo-existed with humans for 15,000 yearsLast of the large "thunder birds" local to AustraliaFossils found in Mt Gambier, SA and NSW. Footprints found in dunes on southern Victoria Now the mystery behind the big bird's extinction may have been solved, after burnt eggshells revealed people may have been the culprits. Scientists revealed burn patterns detected on eggshell fragments showed the first humans to arrive in Australia, about 50,000 years ago, gathered and cooked the big birds' eggs.

The practise wreaked havoc with its reproductive success. The birds are related to ducks, geese and swans. Genyornis vanished about 47,500 years ago, Professor Miller said. How did Australia's big animals die? Reuters. 1. What Happened When. 2. Work of the Archaeologist. 3. History and Archaeology. 4. Thinking like an Archaeologist 1. 5. Thinking Like an Archaeologist 2. Virtual Digs and other Archaeological Activities.