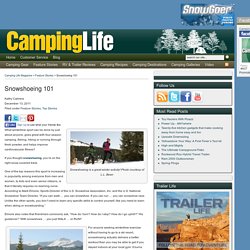 Photo courtesy of L.L. Bean What wintertime sport can be done by just about anyone, goes great with four-season camping, fishing, hiking or running through fresh powder, and helps improve cardiovascular fitness? If you thought snowshoeing, you’re on the right snow-covered track. One of the top reasons this sport is increasing in popularity among everyone from men and women, to kids and even senior citizens, is that it literally requires no learning curve. Elmore also notes that first-timers commonly ask, “How do I turn? Snowshoeing can be done by just about anyone. For anyone seeking wintertime exercise without having to go to a ski resort, snowshoeing actually delivers a better workout than you may be able to get if you stayed indoors at your local gym. According to two independent studies conducted by Ball State University and the University of Vermont, snowshoers can burn between 420-1000 calories per hour. 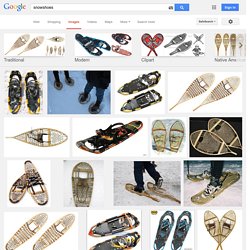 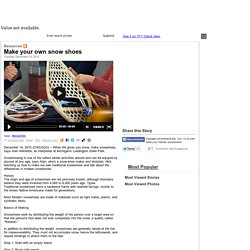 Snowshoeing is one of the safest winter activities around and can be enjoyed by anyone at any age, says Alan, who's a snow-shoe maker and historian. He's teaching us how to make our own traditional snowshoes and talk about the differences in modern snowshoes. History The origin and age of snowshoes are not precisely known, although historians believe they were invented from 4,000 to 6,000 years ago. Types Traditional snowshoes have a hardwood frame with rawhide lacings, similar to the shoes Native Americans made for generations. Most Modern snowshoes are made of materials such as light metal, plastic, and synthetic fabric. Basics of Making Snowshoes work by distributing the weight of the person over a larger area so that the person's foot does not sink completely into the snow, a quality called "flotation. " Step 1: Start with an empty frame Tags: Snowshoe7.jpg (JPEG Image, 550 × 250 pixels) Snowshoes: How To Make And Use Them. Taken From Boy Mechanics Book 2 – 1,000 Things For Boys To Do Popular Mechanics Press © 1915 Part One : Shape of Shoes To the inventive mind of the North American Indian we owe the snowshoe, and its conception was doubtless brought about through that prolific source of invention – necessity. 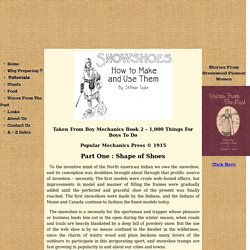 The first models were crude web–footed affairs, but improvements in model and manner of filling the frames were gradually added until the perfected and graceful shoe of the present was finally reached. The first snowshoes were made by the Indians, and the Indians of Maine and Canada continue to fashion the finest models today. The snowshoe is a necessity for the sportsman and trapper whose pleasure or business leads him out in the open during the winter season, when roads and trails are heavily blanketed by a deep fall of powdery snow. The frame of the snowshoe in its usual construction, showing the cross pieces with their lace fillings of hide and the different parts named for a ready reference. Snow shoes design. How to Make and Use Snowshoes. Making the Shoe. [In making the snowshoe it may be necessary to refer to the previous chapter to select the style, or to locate the name of the parts used in the description. - Editor.] 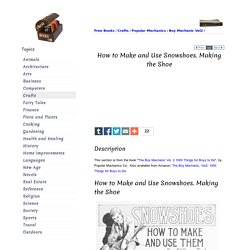 SNOWSHOE mak-ing is an art, and while few, if any, white men can equal the Indian in weaving the intricate patterns which they prefer to employ for filling the frames, it is not very difficult to fashion a good solid frame and then fill it by making use of a simple and open system of meshing. For the frames, white ash is much the best wood, but hickory and white birch are dependable substitutes, if the former cannot be obtained. Birch is perhaps the best wood to use when the sportsman wishes to cut and split up his own wood, but as suitable material for the frames may be readily purchased for a small sum, probably the majority of the readers will elect to buy the material. Any lumber dealer will be able to supply white ash, and it is a simple matter to saw out the frames from the board.