Absorption Spectra. Like many important scientific discoveries, Fraunhofer's observation of spectral lines was a complete accident. 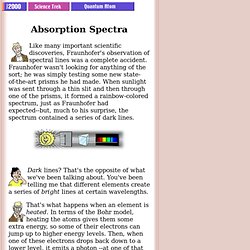 Fraunhofer wasn't looking for anything of the sort; he was simply testing some new state-of-the-art prisms he had made. When sunlight was sent through a thin slit and then through one of the prisms, it formed a rainbow-colored spectrum, just as Fraunhofer had expected--but, much to his surprise, the spectrum contained a series of dark lines. Dark lines? That's the opposite of what we've been talking about. You've been telling me that different elements create a series of bright lines at certain wavelengths. That's what happens when an element is heated. And those photons create the bright lines in the spectra you showed me. Exactly--that's called an emission spectrum. So all those other frequencies would come through okay. That's right. And that's what Fraunhofer saw? 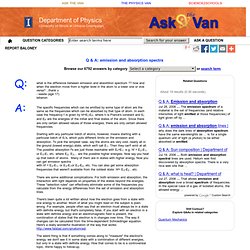 In each case the frequency f is given by hf=EI-EF, where h is Planck's constant and EI and EF are the energies of the initial and final states of the atom. Since there are only certain allowed values of those energies, there are only certain allowed frequencies. Starting with any particular batch of atoms, however, means starting with a particular batch of EI's, which puts different limits on the emission and absorption.

To pick the simplest case, say the atoms are very cold, nearly all in the ground (lowest energy) state, which we'll call E1. Then they can't emit at all. There are some additional complications. There's been quite a lot written about how the electron goes from a state with one energy to another. Absorption and Emission. Continuum, Absorption & Emission Spectra A given atom will absorb and emit the SAME frequencies of electromagnetic (E-M) radiation. 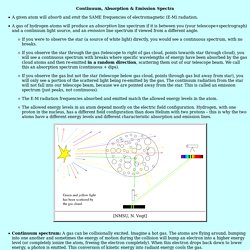 A gas of hydrogen atoms will produce an absorption line spectrum if it is between you (your telescope+spectrograph) and a continuum light source, and an emission line spectrum if viewed from a different angle. If you were to observe the star (a source of white light) directly, you would see a continuous spectrum, with no breaks. If you observe the star through the gas (telescope to right of gas cloud, points towards star through cloud), you will see a continuous spectrum with breaks where specific wavelengths of energy have been absorbed by the gas cloud atoms and then re-emitted in a random direction, scattering them out of our telescope beam.

We call this an absorption spectrum (continuous + dips). Thanks to Mike Bolte (UC Santa Cruz) for the base contents of this slide. A.2.2 Distinguish between absorption and emission spectra and how each is produced IB Chemistry SL. Atomic Absorption and Emission Spectra. As we have noted in the section on the Bohr atom, isolated atoms can absorb and emit packets of electromagnetic radiation having discrete energies dictated by the detailed atomic structure of the atoms. 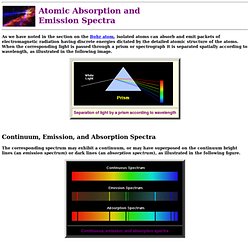 Thus, emission spectra are produced by thin gases in which the atoms do not experience many collisions (because of the low density). Media.wwnorton.com/college/chemistry/chemtours/chapter_07/orbital_filling/interface.swf. Media.wwnorton.com/college/chemistry/chemtours/chapter_07/quantum_numbers/interface.swf. Atomic orbitals - electron configuration of Scandium (Z=21) Heisenberg's Uncertainty Principle Explained. Understanding the Atom. W. W. Norton & Company: StudySpace.