Architectural Details: Toyo Ito’s Flowing Concrete Canopy. While Instagram and Pinterest have granted us an unlimited supply of stunning renderings and pristine photographs for key architectural projects across the globe, the design details and construction processes that make these buildings unique remain inaccessible to a vast majority of the general public. 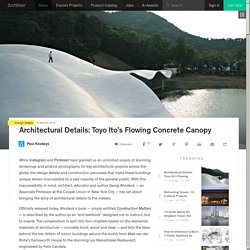 This two-storey crematorium is situated between a small body of water and a large wooded slope. 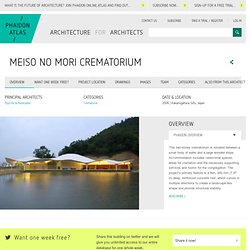 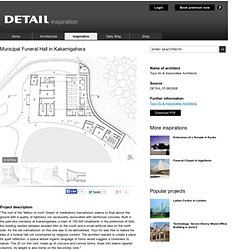 Built in the park-like cemetery at Kakamigahara, a town of 150,000 inhabitants in the prefecture of Gifu, the building nestles between wooded hills on the south and a small artificial lake on the north side. As the old crematorium on this site was to be demolished, Toyo Ito was free to realise his idea of a funeral hall not constrained by religious content. The architect wanted to create a place for quiet reflection, a space whose organic language of forms would suggest a closeness to nature. La arquitectura del cubo. La forma del cubo y la relación con la arquitectura o el diseño es tan familiar que aparece por todas partes, aunque no caemos en ello hasta que no prestamos atención especial. 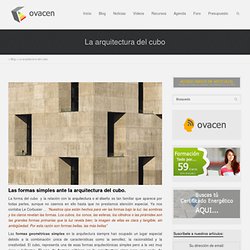 The competition for the new Guggenheim Museum in Helsinki closed last month, becoming the most popular architectural competition in history with 1,715 entries. 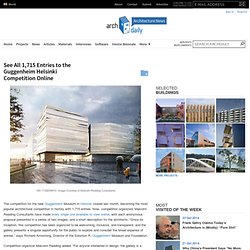 Now, competition organizers Malcolm Reading Consultants have made every single one available to view online, with each anonymous proposal presented in a series of two images, and a short description fro the architects. “Since its inception, this competition has been organized to be welcoming, inclusive, and transparent, and the gallery presents a singular opportunity for the public to explore and consider the broad expanse of entries,” says Richard Armstrong, Director of the Solomon R. Guggenheim Museum and Foundation. Jacob k javits convention center by im pei - Поиск в Google. Gmp, Von Gerkan, Marg and Partners. The Grand Theater occupies the key position in the newly built Culture Park of Tianjin. 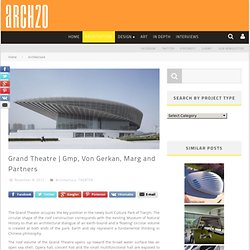 The circular shape of the roof construction corresponds with the existing Museum of Natural History so that an architectural dialogue of an earth-bound and a ‘floating’ circular volume is created at both ends of the park. Earth and sky represent a fundamental thinking in Chinese philosophy. The roof volume of the Grand Theatre opens up toward the broad water surface like an open sea shell. Opera hall, concert hall and the small multifunctional hall are exposed to the water surface like pearls inside this shell. 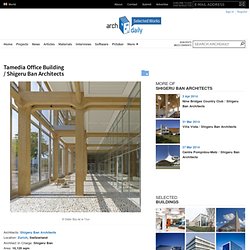 Innovation. Bricks give a perforated facade to mountain building by Li Xiaodong. Chinese architect Li Xiaodong, the recipient of the inaugural Moriyama Prize, completed this building with an elaborate brickwork facade to create offices and dormitories at a building site in Zhejiang Province (+ slideshow). 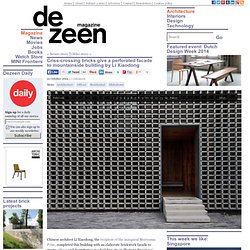 Li Xiaodong, who received the Royal Architectural Institute of Canada award for his "modest" Liyuan Library project, designed the Screen for a rural site in Dichen Valley, just outside the Chinese city of Ningbo. It is the first building of a larger development, so the architect was tasked with designing both offices and accommodation for the team that will build the rest of the complex.

His concept was for a structure that impacts on the landscape as little as possible. "To be able to appreciate and respect the pristine site in Dichen Valley in its totality, we proposed a series of carefully placed architectural interventions to create a route of pure and distinct landscape experiences," said Martijn de Geus, one of the architects on Li's team. Competition Entry: NOA’s Proposal for Dalseong Citizen’s Gymnasium.

Nomad Office Architects (NOA) has shared with us their proposal for the Dalseong Citizen’s Gymnasium open ideas competition, which was awarded honorable mention. 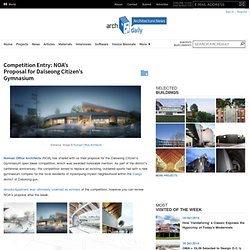 As part of the district’s centennial anniversary, the competition aimed to replace an existing, outdated sports hall with a new gymnasium complex for the local residents of Hyeonpung-myeon neighborhood within the Daegu district of Dalseong-gun. drozdov&partners was ultimately crowned as winners of the competition, however you can review NOA’s proposal after the break. From the architects: Background and Vision Nature felt more connected to us when we were small. For children, nature is a treasure room of joys of sensorial and physical exploration. Competition Entry: NOA’s Proposal for Dalseong Citizen’s Gymnasium. The Hedonist. The Hedonist was selected to be one of ‘Hotel ShabbyShabby’ rooms for Theather der Welt in Mannheim – the most influential theater festival in Germany. 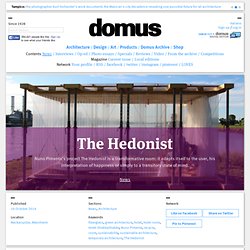 ‘Hotel ShabbyShabby’ was curated by Raumlaborberlin in partnership with the festival and consisted on the design and construction of 20 temporary hotel rooms located in unexpected public spaces of Mannheim that should provide a unique experience to their guests. These rooms should be built only with recycled, reused or recyclable materials and should not exceed the budget of 250€. Nuno Pimenta, The Hedonist, Neckarspitze, Mannheim, Germany All the rooms were built in a workshop and construction camp right in front of the National Theatre of Mannheim and then transported to their respective sites. The Hedonist was located at Neckarspitze, the exact place where the river Rhine and Neckar converge, a place with incredible 360º views that combine idyllic nature with industrial night lights and big ships passing by. Barkow and Leibinger.

German architects Frank Barkow and Regine Leibinger present the shape-shifting prototype “Kinetic wall” created for the International Architecture Biennale 2014 in Venice. The wall’s surface rhythmically expands and contracts so it looks like breathing in and out aiming to “revisit the Utopian dream of an architecture that can move” said the architects. The architecture projects shaping Bordeaux. AD Classics: Wexner Center for the Arts / Peter Eisenman. Before it was even completed, New York Times critic Paul Goldberger dubbed the Wexner Center for the Arts “The Museum That Theory Built.” [1] Given its architect, this epithet came as no surprise; Peter Eisenman, the museum’s designer, had spent the better part of his career distilling architectural form down to a theoretical science.

It was with tremendous anticipation that this building, the first major public work of Eisenman’s career, opened in 1989. For some, it heralded a validation of deconstructivism and theory, while its problems provided ammunition for others who saw theory and practice as complimentary but ultimately divergent pursuits. Construction progresses on herzog & de meuron's new bordeaux stadium. Sep 08, 2014. Herzog & de Meuron Breaks Ground on ‘Grand Stade de Bordeaux’ Nearly two years after unveiling the design to the public, Herzog & de Meuron broke ground this morning on the new ‘Grand Stade de Bordeaux’ in France.

Surrounded by lush vegetation typically found in this green belt district, the stepped concourse transitions visitors through a forest of slender white columns to the stadium’s bowl, whose form ensures maximum flexibility and optimal visibility for all 43,000 spectators. Completion is set for 2015, just in time to host the Euro 2016 football championship. The architect’s description after the break… Vision of a stadium. Haworth Tompkins’ Everyman Theatre Wins the 2014 RIBA Stirling Prize. Haworth Tompkin‘s Everyman Theatre has won the RIBA Stirling Prize for 2014, beating competition from Zaha Hadid, Renzo Piano, Mecanoo, O’Donnell + Tuomey and Feilden Clegg Bradley. The result was just announced by RIBA President Stephen Hodder at an event held at the RIBA’s Headquarter’s in London, with Director of Haworth Tompkins Steve Thompkins thanking his clients and the people of Liverpool for their patience during the renovation and for “taking the new building back into their hearts.”