Home - Cashel. Daytime Attractions - Shannon Heritage. Bunratty Castle & Folk Park is a must on your itinerary to Ireland. 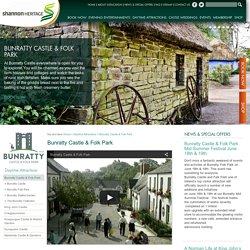 This is your chance to experience a window on Ireland’s past and explore the acclaimed 15th century Bunratty Castle and the 19th century Bunratty Folk Park. Bunratty Castle Welcome to Bunratty Castle, the most complete and authentic medieval fortress in Ireland. Built in 1425 it was restored in 1954 to its former medieval splendor and now contains mainly 15th and 16th century furnishings, tapestries, and works of art which capture the mood of those times. Find out more about Bunratty Castle. Clonmacnoise - County Offaly, Ireland. Blarney Castle And Gardens. St. Audoen's Church, Dublin (Church of Ireland) Coordinates: Seal of St. 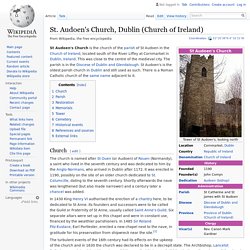 Anne's Guild, 1599. Drimnaghcastle. St Michan's Church. Ross Castle B&B - Ireland castle vacation with bed and breakfast tourist accommodation. Kells Priory. Kells Priory (Irish: Prióireacht Cheanannais) is one of the largest and most impressive medieval monuments in Ireland. 4 km southeast of the priory on the R697 regional road is Kilree round tower and 9th century High Cross, said to be the burial place of Niall Caille. 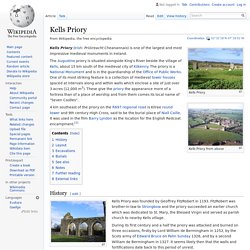 It was used in the film Barry Lyndon as the location for the English Redcoat encampment.[1] History[edit] Kells Priory was founded by Geoffrey FitzRobert in 1193. Barryscourt Castle. Barryscourt Castle (Caisleán Chúirt an Bharraigh in Irish) is a castle located in eastern County Cork in southern Ireland, close to the town of Carrigtwohill. 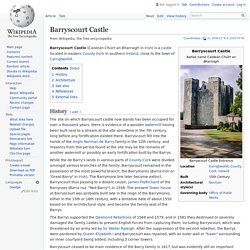 History[edit] The site on which Barryscourt castle now stands has been occupied for over a thousand years- there is evidence of a wooden watermill having been built next to a stream at the site sometime in the 7th century, long before any fortification existed there. Barryscourt fell into the hands of the Anglo-Norman de Barry family in the 12th century, and masonry from this period found at the site may be the remains of another watermill or possibly an early fortification built by the Barrys. Malahide Castle & Gardens. Welcome to Ardgillan Castle. Dublin Castle. Dunluce Castle: Medieval Irish Castle on the Antrim Coast. The iconic ruin of Dunluce Castle bears witness to a long and tumultuous history. 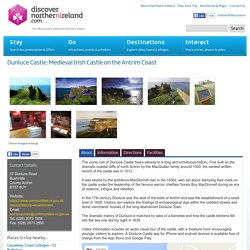 First built on the dramatic coastal cliffs of north Antrim by the MacQuillan family around 1500, the earliest written record of the castle was in 1513. It was seized by the ambitious MacDonnell clan in the 1550s, who set about stamping their mark on the castle under the leadership of the famous warrior chieftain Sorely Boy MacDonnell during an era of violence, intrigue and rebellion. In the 17th century Dunluce was the seat of the earls of Antrim and saw the establishment of a small town in 1608. Christ Church Cathedral Dublin - : Christ Church Cathedral Dublin. St Patrick's Cathedral. Kilkenny Tourism.

Glendalough, Co. Wicklow, Ireland – Official website. Places To See: Buildings of Ireland: National Inventory of Architectural Heritage. Saint Mary's Catholic Church can trace its origins back to a reasonably humble parish church erected to a design by Richard Pierce (1801-54) of Wexford drawing on his early career as clerk-of-works to Augustus Welby Northmore Pugin (1812-52). 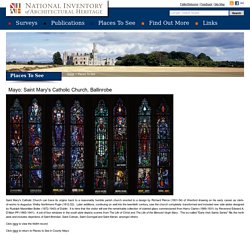 Later additions, continuing on well into the twentieth century, saw the church completely transformed and included new side aisles designed by Rudolph Maximilian Butler (1872-1943) of Dublin. It is here that the visitor will see the remarkable collection of stained glass commissioned from Harry Clarke (1889-1931) by Reverend Edward A. D'Alton PP (1865-1941). A set of four windows in the south aisle depicts scenes from The Life of Christ and The Life of the Blessed Virgin Mary.