Research has uncovered the reason why dementia patients get lost. Incredibly, the results from the study could form the basis of new treatments - potentially even a cure, researchers from Columbia University Medical Centre have posited. 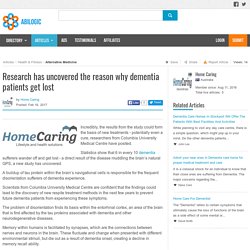 Statistics show that 6 in every 10 dementia sufferers wander off and get lost - a direct result of the disease muddling the brain’s natural GPS, a new study has uncovered. A buildup of tau protein within the brain’s navigational cells is responsible for the frequent disorientation sufferers of dementia experience.

Scientists from Columbia University Medical Centre are confident that the findings could lead to the discovery of new respite treatment methods in the next few years to prevent future dementia patients from experiencing these symptoms. The problem of disorientation finds its basis within the entorhinal cortex, an area of the brain that is first affected by the tau proteins associated with dementia and other neurodegenerative diseases. Professor Dr Karen Duff of the Columbia Medical Centre commented on the topic:

Loud hospitals can increase risk of dementia, study finds. Busy and loud hospitals have been seen to influence acceleration in dementia symptoms, a study has found. 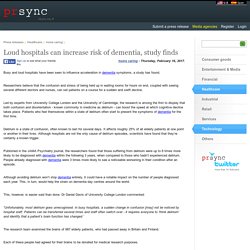 Researchers believe that the confusion and stress of being held up in waiting rooms for hours on end, coupled with seeing several different doctors and nurses, can set patients on a course for a sudden and swift decline. Led by experts from University College London and the University of Cambridge, the research is among the first to display that both confusion and disorientation - known commonly in medicine as delirium - can boost the speed at which cognitive decline takes place. Patients who feel themselves within a state of delirium often start to present the symptoms of dementia for the first time. Delirium is a state of confusion, often known to last for several days. Mental activity protects brain from dementia, US scientists find – Shareurarticle.com. As it’s such a pressing global issue, scientists worldwide are constantly striving to find new ways of preserving the memories of the elderly. 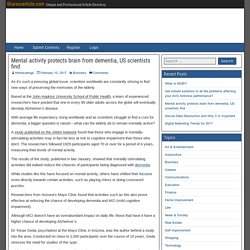 Based at the John Hopkins University School of Public Health, a team of experienced researchers have posited that one in every 85 older adults across the globe will eventually develop Alzheimer’s disease. With average life expectancy rising worldwide and as scientists struggle to find a cure for dementia, a bigger question is raised – what can the elderly do to remain mentally active? Australian of the Year candidate criticised for talking about her dementia fight. South Australia’s candidate for Australian of the Year Kate Swaffer has commented on her reception by the public and the media for speaking out about her battle with dementia. 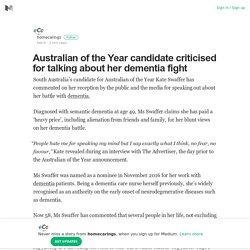 Diagnosed with semantic dementia at age 49, Ms Swaffer claims she has paid a ‘heavy price’, including alienation from friends and family, for her blunt views on her dementia battle. “People hate me for speaking my mind but I say exactly what I think, no fear, no favour,” Kate revealed during an interview with The Advertiser, the day prior to the Australian of the Year announcement. Ms Swaffer was named as a nominee in November 2016 for her work with dementia patients. Being a dementia care nurse herself previously, she’s widely recognised as an authority on the early onset of neurodegenerative diseases such as dementia. Alzheimer’s Society Chief promotes hope, despite disappointing week for medical research. At the end of a week that’s yielded much disappointment for those involved with Alzheimer’s and dementia, the Chief Executive of Alzheimer’s Society is urging that there is still hope. 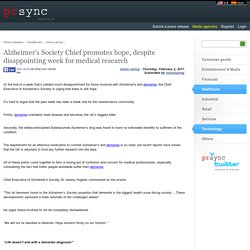 It’s hard to argue that the past week has been a bleak one for the neuroscience community. Firstly, dementia overtakes heart disease and becomes the UK’s biggest killer. Secondly, the widely-anticipated Solanezumab Alzheimer’s drug was found to have no noticeable benefits to sufferers of the condition. The requirement for an effective medication to combat Alzheimer’s and dementia is so clear, yet recent reports have shown that the UK is reluctant to fund any further research into the area. All of these points come together to form a mixing pot of confusion and concern for medical professionals, especially considering the fact that £49m people worldwide suffer from dementia. Articles.org. A new piece of research has revealed that dementia can be diagnosed with an innovative test focused around smell. 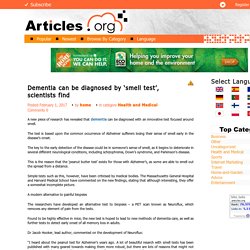 The test is based upon the common occurrence of Alzheimer sufferers losing their sense of smell early in the disease’s onset. The key to the early detection of the disease could be in someone’s sense of smell, as it begins to deteriorate in several different neurological conditions, including schizophrenia, Down’s syndrome, and Parkinson’s disease. This is the reason that the ‘peanut butter test’ exists for those with Alzheimer’s, as some are able to smell out the spread from a distance. Link found between dementia and home proximity to ‘busy roads’ A recent Canadian study has suggested that living near busy roads could have an astonishing effect on the rate of dementia diagnosis. 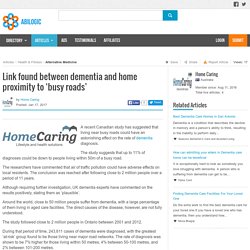 The study suggests that up to 11% of diagnoses could be down to people living within 50m of a busy road. The researchers have commented that air of traffic pollution could have adverse effects on local residents. The conclusion was reached after following close to 2 million people over a period of 11 years. Although requiring further investigation, UK dementia experts have commented on the results positively, stating them as ‘plausible’. Around the world, close to 50 million people suffer from dementia, with a large percentage of them living in aged care facilities.

Promising results as dementia day centre tablet use reduces patient agitation. Technology has revolutionised the commercial world, but could it also boost quality of life for dementia patients? 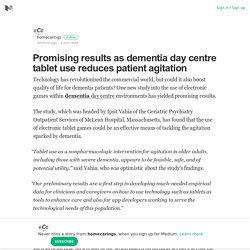 One new study into the use of electronic games within dementia day centre environments has yielded promising results. The study, which was headed by Ipsit Vahia of the Geriatric Psychiatry Outpatient Services of McLean Hospital, Massachusetts, has found that the use of electronic tablet games could be an effective means of tackling the agitation sparked by dementia. “Tablet use as a nonpharmacologic intervention for agitation in older adults, including those with severe dementia, appears to be feasible, safe, and of potential utility.” said Vahia, who was optimistic about the study’s findings. New interactive game offers valuable respite to dementia patients. Engaging and meaningful activities have always had huge benefits for dementia residents in care homes, so much so that it’s a key part of their day-to-day lives. 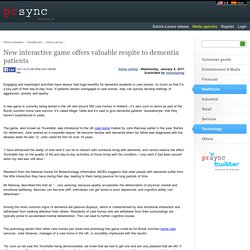 If patients remain unengaged in care homes, they can quickly develop feelings of aggression, anxiety and apathy. A new game is currently being tested in the UK and around 500 care homes in Holland - it’s also soon to arrive as part of the Bondi Junction home care service. It’s called Magic Table and it’s said to give dementia patients ‘Goosebumps’ that they haven’t experienced in years. The game, also known as Tovertafel, was introduced to the UK care home market by John Ramsay earlier in the year. Articles.org. New research has been produced that suggests that under 40’s will never have to experience the pain of dementia. 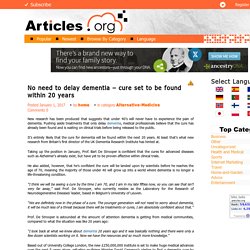 Pushing aside treatments that only delay dementia, medical professionals believe that the cure has already been found and is waiting on clinical trials before being released to the public. It’s entirely likely that the cure for dementia will be found within the next 20 years. At least that’s what new research from Britain’s first director of the UK Dementia Research Institute has hinted at.

Get the best Sydney Home Care for Dementia Patients. Respite care in Australia. According to Health Direct, there are currently around 350,000 Australians experiencing the symptoms of Alzheimer’s disease. According to experts, roughly 5.2 million of these individuals are 65 or older. It is estimated that it costs around $2,750 per week to provide respite to one individual with Alzheimer’s disease.

Day Care and Dementia. Dementia is a growing concern across the globe. In the UK it is the leading cause of death, as of November 2016. It is suggested that this is due to increased ability to recognise and diagnose dementia sooner. This coincides with improving treatments for general medical conditions. Current research highlights the urgent need for improving access to care plans for people living with dementia. Individuals with dementia have complicated needs and as such it is often beneficial for them to live in accommodation with constant care staff on hand. Articles.org. On the hole, Australia has a great network for providing care to those individuals living with dementia. The condition affects around 350,000 Australians, with around 1.2 million people involved in the care of people living with dementia. This system of care costs around $4.9 billion to maintain year on year, with an estimated 175,000 people receiving aged or home care.

Get the best dementia day centre. Virtual reality to revolutionise palliative care. Link found between sudden drops in blood pressure and dementia, Business - weSRCH. Sudden drops in blood pressure or dizziness could be linked to dementia, research has shown. Scientists have found that those who experience sudden fluctuations in blood pressure or lightheadedness when standing up could be more susceptible to developing dementia later in life. In the journal Plos Medicine, they suggested that during these moments less blood is able to reach the brain, which over time can cause brain damage. Other dementia experts have validated the study as ‘plausible’ and ‘robust’, stating it as an area that requires further investigation.