Excessive Traffic. What may be causing this? 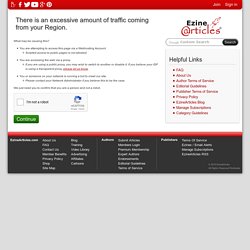 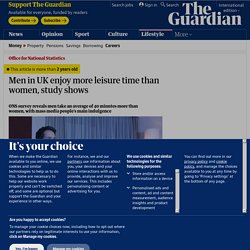 Men spend six hours and nine minutes a day on leisure pursuits, compared with five hours and 29 minutes for women, the Office for National Statistics (ONS) has found. The gender gap is greatest in north-west England, where men spent an average 36.2 hours a week engaged in leisure activities, seven hours more than women. The smallest gap was in Northern Ireland where the time spent was identical for men and women. Understanding why consumers read print media. There are plenty of sources to inform us what, how, when and how much people are reading magazines or national press titles, but not so much about why they are consuming them. 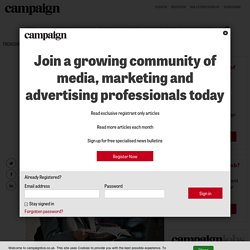 A study from Carat's CCS (Consumer Connection System) helps throw some light on this question, and shows that the role of magazines in a consumer’s media lifestyle varies according to gender and age. There are vast differences in the reasons why women read magazines vs why men read them. For women, sitting down with their favourite magazines and a cuppa is seen as a form of escapism. In contrast, only 9% of men read magazines for this reason. Fifty three percent of 25-44 year old women agree that magazines offer ‘Me Time’, away from the stresses of their busy days (vs only 36% of all regular magazine readers). Men’s Magazine Market Sees Wave of Upheaval. Are men still reading magazines? 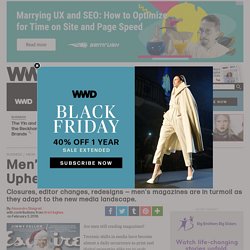 Tectonic shifts in media have become almost a daily occurrence as print and digital properties alike try to grab consumers’ attention and dollars. But arguably no other sector has been as pressured as the men’s market in recent months. How Interview Magazine Came Back From the Dead. NEW YORK, United States — Andy Warhol’s Interview magazine, owned until last month by the one-time billionaire and art collector Peter Brant, is back on newsstands Thursday, less than four months after filing for bankruptcy. 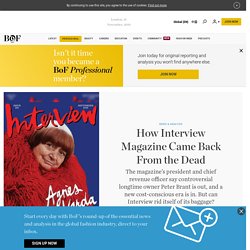 Thanks to the United States Bankruptcy Code and new, undisclosed investors, Interview returns with a younger Brant at the helm. Peter Brant’s daughter Kelly, its president since 2016, and Jason Nikic, its chief revenue officer since 2016, are its new owners. Kelly insists that her father is no longer a part of Interview in any capacity. Nor is her mother, Sandra Brant, who ran the magazine with Ingrid Sischy in the 1990s and 2000s.

Why There Are More Fashion Magazines Than Ever. NEW YORK, United States — Inside Soho News, a convenience store and specialty magazine shop in lower Manhattan, tall stacks of thick magazines line the walls. 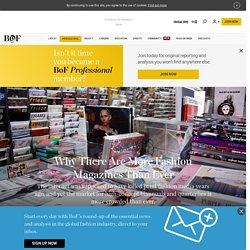 Shoppers navigate carefully through the narrow aisles, where everything from the Hola! Tabloid to Computer Music magazine is for sale. But the best real estate is saved for giant fashion and style magazines, many of which look more like coffee table books. Owner Bhavin Sheth said the number of fashion publications for sale has increased in recent years, though it’s hard to say exactly by how much. Right now, he probably has around 50 titles in that category alone. Print vs. Digital: How We Really Consume Our Magazines – 2018 edition. Freeport Press promoted a 10-question survey (identitcal to the 2017 edition) to a variety of magazine readers in the North America – demographics chart below. 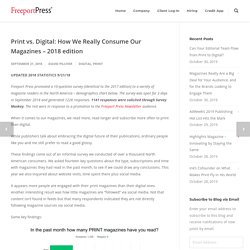 The survey was open for 3 days in September 2018 and generated 1226 responses. 1141 responses were solicited through Survey Monkey. The rest were in response to a promotion to the Freeport Press Newsletter audience. When it comes to our magazines, we read more, read longer and subscribe more often to print than digital. While publishers talk about embracing the digital future of their publications, ordinary people like you and me still prefer to read a good glossy. These findings come out of an informal survey we conducted of over a thousand North American consumers. 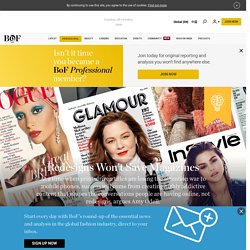 Samantha Barry, Glamour’s first new editor in 16 years, just unveiled a redesign that she’s hoping will do just that. Glenda Bailey Talks Future of Magazines and Harper’s Bazaar 150th Anniversary. NEW YORK, United States — At the beginning of New York Fashion Week, right before four longtime editors-in-chiefs announced that they would be exiting their respective publications, Glenda Bailey had the unfortunate luck of falling and injuring her arm and leg. 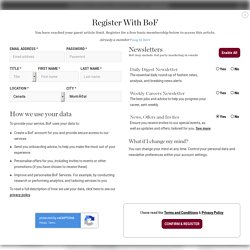 This forced her to sit out the shows for the first time since she took over Harper Bazaar’s US edition 16 years ago. It didn’t help the growing rumours that she might be the next legendary editor to step down. “It’s hard to tell why I'm receiving so many bouquets,” she said with a laugh, referring to the “fields of flowers” that arrived at her office after the accident. Market overview the basics june 2019. Magazine market performance by sector UK 2018. The magazine market isn’t dead, it’s different. Firstly, let me firmly state that I heart magazines. 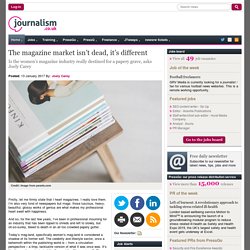 I really love them. I’m also very fond of newspapers but mags: those luscious, heavy, beautiful, glossy works of genius are what makes my professional heart swell with happiness. And so, for the last few years, I’ve been in professional mourning for an industry that has been ripped to shreds and left to slowly, but oh-so-surely, bleed to death in an all too crowded papery gutter. Today’s mag-land, specifically women’s mag-land is considered a shadow of its former self. The celebrity and lifestyle sector, once a behemoth within the publishing world is – from a circulation perspective – a limp, lacklustre version of what it was once was. Oh, how the mighty have fallen. 1. “60 out of 442 titles grow sales” sang one. 2. Learning from the magazine market sectors that pay. Why is it that some areas of magazine publishing are thriving, while in others publishers are fighting to keep their magazines on the newsstands?

Mary Hogarth examines those markets where titles are flourishing. While there is much to be learned from analysing magazines in those stronger sectors such as B2B and specialist, value and accessibility should form the core of any value proposition. Here I explore those sectors where magazines are thriving and the secrets of their success.