Most amazing basketball shot ever? Watch this utterly ridiculous behind-the-backboard buzzer beater. Whenever we mention basketball to people, many have the same reaction. 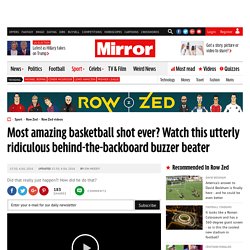 "What?! You don't like that, do you?! It's so boring - two teams just going back and forth, scoring at both ends for ages... what a load of nonsense. " "Rubbish," we reply. "Basketball can be gloriously entertaining. " And, of course, it can be: just look at this chump scoring a two-pointer - in the WRONG hoop. But this video, which you can watch at the top of the page, is off the charts. YouTube/Sam Thomas It came at the very end of an Australian basketball match between Mornington Breakers and Pakenham Warriors.

Going into the last two seconds of the game, the Warriors are just trailing the undefeated Breakers. Unbelievably, the shot is taken from BEHIND the backboard, with the player having both feet off the ground off the court - meaning it's still a legal effort. As the buzzer goes, the shot sinks through the net. How to Perform 3 Unstoppable Post Moves. The game of basketball is won in the paint. 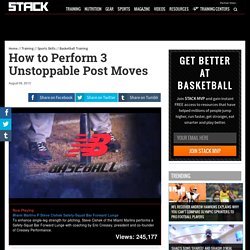 Often the team that scores more points in the lane wins the game. Basketball Drills Inspirational Video. Analytics Reveal 13 New Basketball Positions. For as long as basketball has been played, it’s been played with five positions. 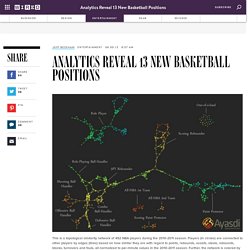 Today they are point guard, shooting guard, small forward, power forward and center. A California data geek sees 13 more hidden among them, with the power to help even the Charlotte Bobcats improve their lineup and win more games. Muthu Alagappan is a Stanford University senior, a basketball fan and an intern at Ayasdi, a data visualization company. Ayasdi takes huge amounts of info like tumor samples and displays it in interactive shapes that highlight patterns like genetic markers that indicate a likelihood of ovarian cancer.

It’s called topological data analysis, and it can be applied to sports, too. 10 Simple Daily Drills Every Basketball Player Should Do. RELATED: The 10 Best Basketball Sneakers of 2013 (So Far) RELATED: What the 25 Best Players in the NBA Wear and Why No. 1 - Ricochet Best For: All Players Avoid If: You are in a wide open space (ball can bounce far away) This is a great little drill, and since it involves only a ball you can do it pretty much anywhere. 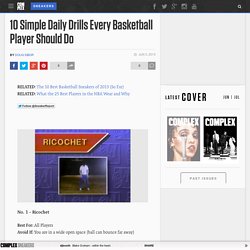 It trains your hand-eye coordination and gets you familiar with handling the ball, skills that translate to pretty much every area of basketball. All you need to do is stand with your legs spread a bit wider than shoulder-width apart with your knees completely locked, holding the basketball out in front of you. No. 2 - Dribbling Figure 8 Best For: Point Guards Avoid If: You have any nagging knee, hip, or finger injuries We are in a golden age of NBA point guards, with the likes of Nash, Paul, Rondo and others routinely making the incredible plays look simple. No. 3 - Sprint/Free Throws As Shaquille O’Neal or Dwight Howard can tell you, free throw shooting is not easy. ESPN.com: Page 2 : Jordan rules compared to Kobe. By Skip BaylessPage 2 Kobe Bryant is a little more gifted athletically than Michael Jordan was. 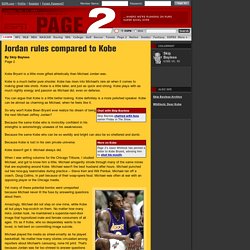 Kobe is a much better pure shooter. Kobe has risen into Michael's rare air when it comes to making great late shots. Kobe is a little taller, and just as quick and strong. Kobe plays with as much nightly energy and passion as Michael did, even on defense. NBA.com - NBA’s Misunderstood Rules. Defensive Three Seconds: A defensive player is not allowed inside the key area for more than three seconds unless he is guarding the player with the ball or is actively guarding any opponent. 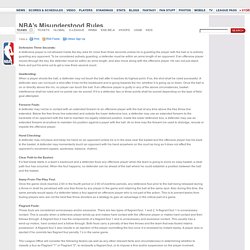 To be considered actively guarding, a defender must be within an arms length of an opponent. If an offensive player moves through the key, the defender must be within an arms length, and also move along with the offensive player. He can not just stand there and put his arms out to get a new three second count. Goaltending: When a player shoots the ball, a defender may not touch the ball after it reaches its highest point. 50 Random NBA Facts You Never Knew. Thirteen Rules of Basketball - James Naismith. Fabulous 15-Basketball Drills For All Ages. We Are Basketball. Crossover Drive-in Layup Jump Shot Techniques - Basketball Drills. History of Basketball - James Naismith. Basketball - James Naismith (1861-1939) Photo: Y.M.C.A. training school [Springfield College], Springfield, Mass. - home of basketball. 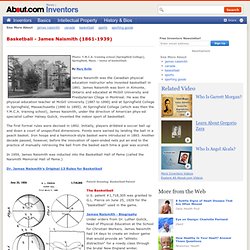 By Mary Bellis James Naismith was the Canadian physical education instructor who invented basketball in 1891. James Naismith was born in Almonte, Ontario and educated at McGill University and Presbyterian Cllege in Montreal. He was the physical education teacher at McGill University (1887 to 1890) and at Springfield College in Springfield, Massachusetts (1890 to 1895). The first formal rules were devised in 1892. In 1959, James Naismith was inducted into the Basketball Hall of Fame (called the Naismith Memorial Hall of Fame.) Basketball Equipment, History and Rules. Pure Sweat Basketball Skills Workout. Inspirational B-Ball Video for players worldwide - "Basketball Skillz" on Google+