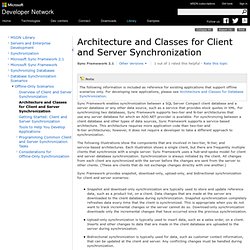 How to: Use SQL Server Change Tracking. This topic provides an overview of SQL Server change tracking and describes a console application that performs bidirectional synchronization between a SQL Server database and a SQL Server Compact database. 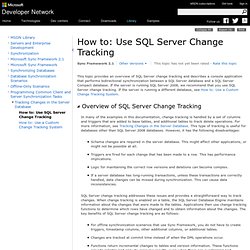 If the server is running SQL Server 2008, we recommend that you use SQL Server change tracking. If the server is running a different database, see How to: Use a Custom Change Tracking System. In many of the examples in this documentation, change tracking is handled by a set of columns and triggers that are added to base tables, and additional tables to track delete operations. For more information, see Tracking Changes in the Server Database. This type of tracking is useful for databases other than SQL Server 2008 databases. Schema changes are required in the server database. C# - Syncing SQL Server 2008 Databases over HTTP using WCF & Sync Framework. Synchronizing SQL Server and SQL Server Compact. The topics in this section provide background information, procedural content, and complete code examples for common synchronization tasks that you can perform by using Sync Framework. 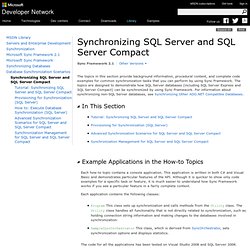 Although it is quicker to show only code examples for a specific task or feature, it is much easier to understand how Sync Framework works if you see a particular feature in a fairly complete context. Each application contains the following classes: Program This class sets up synchronization and calls methods from the Utility class. To run each application. How To: Execute Database Synchronization (SQL Server) This topic describes how to execute synchronization between a SQL Server and SQL Compact and provides examples. 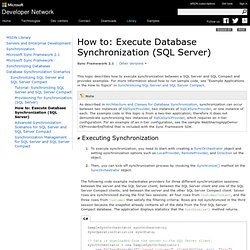 For more information about how to run sample code, see "Example Applications in the How to Topics" in Synchronizing SQL Server and SQL Server Compact. To execute synchronization, you need to start with creating a SyncOrchestrator object and setting synchronization options such as LocalProvider, RemoteProvider, and Direction on the object. Then, you can kick off synchronization process by invoking the Synchronize() method on the SyncOrchestrator object. SelvinListSyncSample. SyncService – code generated entities. Ganeshan's Blog. Sql server - How to use MS Sync Framework to filter client-specific data. 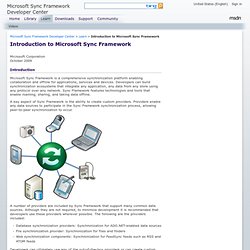 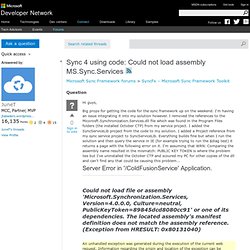 I'm having an issue integrating it into my solution however. I removed the references to the Micorosft.Synchronization.Services.dll file which was found in the Program Files folders (the installed October CTP) from my service project. I added the SyncServiceLib project from the code to my solution. I added a Project reference from my sync service project to SyncServiceLib. Assembly Load Trace: The following information can be helpful to determine why the assembly 'Microsoft.Synchronization.Services, Version=4.0.0.0, Culture=neutral, PublicKeyToken=89845dcd8080cc91' could not be loaded. Stack Trace: