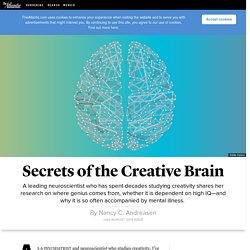 Kurt was a faculty member at the Iowa Writers’ Workshop in the 1960s, and participated in the first big study I did as a member of the university’s psychiatry department. I was examining the anecdotal link between creativity and mental illness, and Kurt was an excellent case study. He was intermittently depressed, but that was only the beginning. His mother had suffered from depression and committed suicide on Mother’s Day, when Kurt was 21 and home on military leave during World War II. His son, Mark, was originally diagnosed with schizophrenia but may actually have bipolar disorder. While mental illness clearly runs in the Vonnegut family, so, I found, does creativity. “Doing good science is … like having good sex. Makerbook - The best free resources for creatives. The Best Time to Write and Get Ideas, According to Science. What does your ideal day look like? 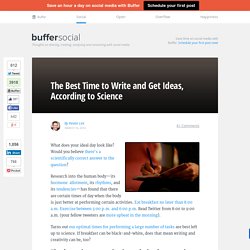 Would you believe there’s a scientifically correct answer to the question? Research into the human body—its hormone allotment, its rhythms, and its tendencies—has found that there are certain times of day when the body is just better at performing certain activities. Eat breakfast no later than 8:00 a.m. Exercise between 3:00 p.m. and 6:00 p.m. Read Twitter from 8:00 to 9:00 a.m. Turns out our optimal times for performing a large number of tasks are best left up to science. The best time to write is early in the morning Your experience with writing may contradict this morning advice, and I hear you. Sleep Your Way to Creativity And 9 More Proven Methods For More Ideas. We’ve written about creativity a few times on the Buffer blog, but it’s hard to keep track of everything we learn about it. 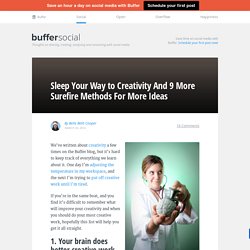 One day I’m adjusting the temperature in my workspace, and the next I’m trying to put off creative work until I’m tired. If you’re in the same boat, and you find it’s difficult to remember what will improve your creativity and when you should do your most creative work, hopefully this list will help you get it all straight. The Secret to Creativity, Intelligence, and Scientific Thinking: Being Able to Make Connections. When we shared this image from the @buffer Twitter account a while back, it got me thinking. 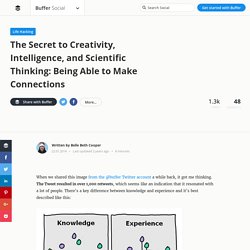 The Tweet resulted in over 1,000 retweets, which seems like an indication that it resonated with a lot of people. There’s a key difference between knowledge and experience and it’s best described like this: The original is from cartoonist Hugh MacLeod, who came up with such a brilliant way to express a concept that’s often not that easy to grasp. The image makes a clear point—that knowledge alone is not useful unless we can make connections between what we know.

Whether you use the terms “knowledge” and “experience” to explain the difference or not, the concept itself is sound. Lots of great writers, artists and scientists have talked about the importance of collecting ideas and bits of knowledge from the world around us, and making connections between those dots to fuel creative thinking and new ideas. Intelligence and connections: why your brain needs to communicate well with itself. 29 manieren om creatief te blijven. 6 Unconventional Tools For Quicker Creativity. All grand inventions, theories, and creatives ideas are composed of small ideas. 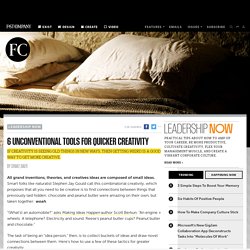 Smart folks like naturalist Stephen Jay Gould call this combinatorial creativity, which proposes that all you need to be creative is to find connections between things that previously laid hidden: chocolate and peanut butter were amazing on their own, but taken together: woah. "(What's) an automobile? " asks Making Ideas Happen author Scott Berkun. "An engine + wheels. A telephone? The task of being an "idea person," then, is to collect buckets of ideas and draw novel connections between them.

How Creativity Works, & How to Do It. By Leo Babauta I’m continually trying to create new things, from new blog posts, to books and courses and novels, to new ventures. 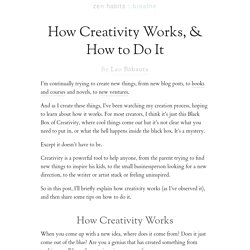 Creativiteit uiting van lagere kans op Parkinson. David Lynch's Secrets For Tapping Into Your Deepest Creativity. If anyone knows a thing or two about creativity, it's David Lynch. 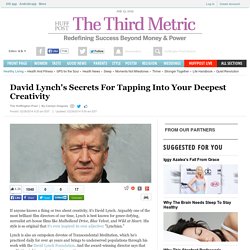 Arguably one of the most brilliant film directors of our time, Lynch is best known for genre-defying, surrealist art-house films like Mulholland Drive, Blue Velvet, and Wild at Heart. His style is so original that it's even inspired its own adjective: "Lynchian. " Lynch is also an outspoken devotee of Transcendental Meditation, which he's practiced daily for over 40 years and brings to underserved populations through his work with the David Lynch Foundation. And the award-winning director says that meditation is his greatest secret to creative success. 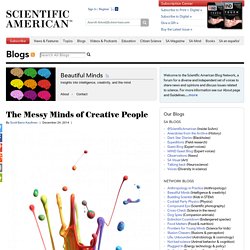 According to one prominent theory, the creative process involves four stages: preparation, incubation, illumination, and verification. This is all well and good in theory. In reality, the creative process often feels like this: Or this: The creative process-- from the first drop of paint on the canvas to the art exhibition-- involves a mix of emotions, drives, skills, and behaviors. 6 Things I Do to Stay Creative. Photo by Frederic della Faille This post was written by Glen Allsop of PluginID. 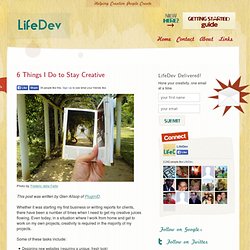 Whether it was starting my first business or writing reports for clients, there have been a number of times when I need to get my creative juices flowing. Even today, in a situation where I work from home and get to work on my own projects, creativity is required in the majority of my projects. Some of these tasks include: Designing new websites (requiring a unique, fresh look)Writing blog posts for myself and othersComing up with ways to streamline my daily tasks …and many more. The End of ‘Genius’ Photo. 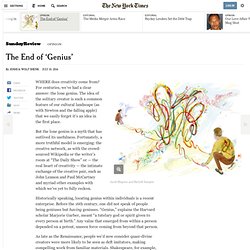 Slow Ideas. Why do some innovations spread so swiftly and others so slowly? Consider the very different trajectories of surgical anesthesia and antiseptics, both of which were discovered in the nineteenth century. The first public demonstration of anesthesia was in 1846. The Boston surgeon Henry Jacob Bigelow was approached by a local dentist named William Morton, who insisted that he had found a gas that could render patients insensible to the pain of surgery. That was a dramatic claim. 100 Inspiratiebronnen. Creatief denken.