Magnitude. Measuring Disasters - Greenfieldgeography - Wikispaces. Most hazard events are measured on some kind of scale to give them a quantifiable outcome. 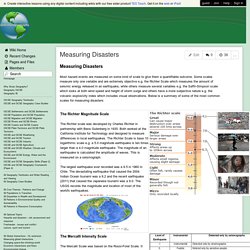 Some scales measure only one variable and are extremely objective e.g. the Richter Scale which measures the amount of seismic energy released in an earthquake, while others measure several variables e.g. the Saffir-Simpson scale which looks at both wind speed and height of storm surge and others have a more subjective nature e.g. the volcanic explosivity index which includes visual observations. Below is a summary of some of the most common scales for measuring disasters:Haiti Devastated by Massive Earthquake - BBC articleCholera death toll jumps in Haiti - BBC articleHaiti quake survivors spend second night in streets - BBC articleStrong aftershock shakes Haiti, week after earthquake - BBC articleWhy did so many people die in Haiti's Quake - BBC articleWhy did Fewer die in Chile's earthquake than Haiti's - BBC article Australia Wildfires (Manmade Disaster) 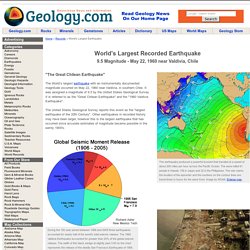 It was assigned a magnitude of 9.5 by the United States Geological Survey. It is referred to as the "Great Chilean Earthquake" and the "1960 Valdivia Earthquake". The United States Geological Survey reports this event as the "largest earthquake of the 20th Century". Other earthquakes in recorded history may have been larger, however this is the largest earthquake that has occurred since accurate estimates of magnitude became possible in the earnly 1900's. Local Damage from Ground Motion and Tsunamis. 5 Worst Man-Made Disasters in History. Earthquakes, tornadoes, typhoons, and other natural disasters are bad enough, but things get worse when human actions lead to additional, preventable problems. 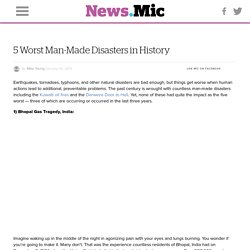 The past century is wrought with countless man-made disasters including the Kuwaiti oil fires and the Derweze Door to Hell. Yet, none of these had quite the impact as the five worst — three of which are occurring or occurred in the last three years. 1) Bhopal Gas Tragedy, India: Imagine waking up in the middle of the night in agonizing pain with your eyes and lungs burning. You wonder if you're going to make it. 2) Deepwater Horizon Oil Spill, Gulf of Mexico: It's hard to forget the worst and largest oil spill in human history since it only happened less than three years ago. 3) Chernobyl Meltdown, Ukraine: On April 26, 1986, Reactor No. 4 in the Chernobyl nuclear power plant exploded. 4) Fukushima Meltdown, Japan: 5) Global Warming, Third Planet from the Sun:

5 Deadliest Pandemics in History. The outbreak of swine flu, first in Mexico then cases all over the world, has gotten a lot of people worried. 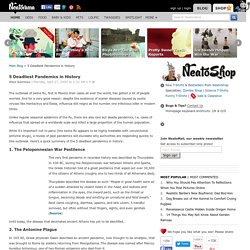 And for a very good reason: despite the existence of scarier diseases caused by exotic viruses like Hantavirus and Ebola, influenza still reigns as the number one infectious killer in modern times. Unlike regular seasonal epidemics of the flu, there are also rare but deadly pandemics, i.e. cases of influenza that spread on a worldwide scale and infect a large proportion of the human population.

While it's important not to panic (the swine flu appears to be highly treatable with conventional antiviral drugs), a review of past pandemics will elucidate why authorities are responding quickly to this outbreak. Earthquakes Magnitude Scale and Classes. The Tornado Scale. The Fujita-Pearson scale or more popularly known as the F scale, is used to measure the intensity of a tornado based on the amount of damage done by a passing tornado over an area. 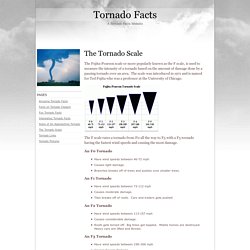 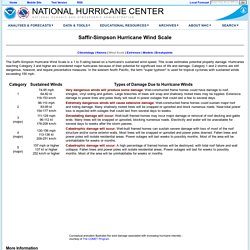 This scale estimates potential property damage. Hurricanes reaching Category 3 and higher are considered major hurricanes because of their potential for significant loss of life and damage. Category 1 and 2 storms are still dangerous, however, and require preventative measures. In the western North Pacific, the term "super typhoon" is used for tropical cyclones with sustained winds exceeding 150 mph. Conceptual animation illustrates the wind damage associated with increasing hurricane intensity - courtesy of The COMET Program More Information If you have trouble viewing linked files, obtain a free viewer for the file format: Adobe Acrobat (pdf) Small Earthquake. Enormous Earthquake.