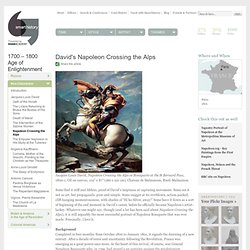 Some see it not as art, but propaganda, pure and simple. Some snigger at its overblown, action-packed, cliff-hanging momentousness, with shades of “Hi ho Silver, away!” Some have it down as a sort of beginning of the end moment in David’s career, before he officially became Napoleon’s artist-lackey. Whatever one might say, though (and a lot has been said about Napoleon Crossing the Alps), it is still arguably the most successful portrait of Napoleon Bonaparte that was ever made. 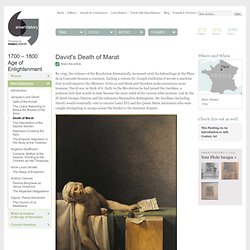 Joseph Guillotine it invent a machine that would improve the efficiency of the ax and block and therefore make executions more humane. David was in thick of it. Early in the Revolution he had joined the Jacobins, a political club that would in time become the most rabid of the various rebel factions. Led by the ill-fated Georges Danton and the infamous Maximilien Robespierre, the Jacobins (including David) would eventually vote to execute Louis XVI and his Queen Marie Antionette who were caught attempting to escape across the border to the Austrian Empire. 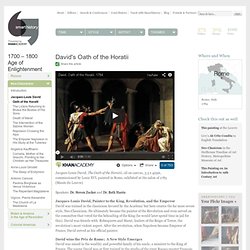 Steven Zucker and Dr. Beth Harris Jacques-Louis David, Painter to the King, Revolution, and the Emperor David was trained in the classicism favored by the Academy but here creates the far more severe style, Neo-Classicism. He ultimately became the painter of the Revolution and even served on the committee that voted for the beheading of the King (he would later spend time in jail for this). David wins the Prix de Rome; A New Style Emerges David was raised in the wealthy and powerful family of his uncle, a minister to the King of France.

The competition was open to the alumni of the École des Beaux-Arts (School of Fine Arts), the preeminent art school in France. What emerged in David's painting was a sharp rejection of the Rococo style. Neo-Classicism. Nicolas Poussin, Et in Arcadia Ego, 1637-38, oil on canvas, 185 cm × 121 cm (72.8 in × 47.6 in) (Louvre) In opposition to the frivolous sensuality of Rococo painters like Jean-Honoré Fragonard and François Boucher, the Neo-classicists looked to Nicolas Poussin for their inspiration. 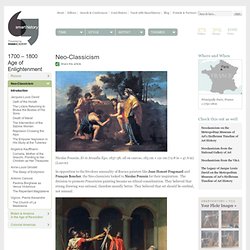 The decision to promote Poussiniste painting became an ethical consideration. They believed that strong drawing was rational, therefore morally better. They believed that art should be cerebral, not sensual. Jacques-Louis David, Oath of the Horatii, oil on canvas, 1784 (Musée du Louvre) The Neo-classicists, such as Jacques-Louis David (pronounced Da-VEED), preferred the well-delineated form—clear drawing and modeling (shading). France was on the brink of its first revolution in 1789, and the Neo-classicists wanted to express rationality and sobriety that was fitting for their times. Text by Beth Gersh-Nesic.