Bringing power of Himalayas in the form of seasoned salt, pink salt (sourced from India) and various other authentic Himalayan food products such as millets, spices, rice, juice, etc to your home. We are the first company to launch Indian pink salt. We also cater to restaurants and supply our products pan India.

Best Salt for Diabetes - Himalayan organic Turmeric Salt - 100gms. Turmeric salt which is explored in Uttarkhand known as ancient golden spice or Indian saffron is nature’s most powerful medicine with supplemental aromatic flavors and giving off light scents of both ginger and orange.Its flavor is earthy, bitter, and pungent,hence best salt for diabetes patients Overall, the flavor is a subtle one, with this spice used just as much for the beauty of the color it gives to food and as for its seasoning properties. 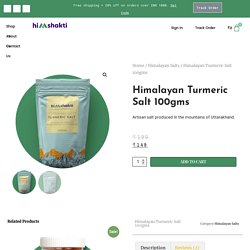 Turmeric contains polyphenolic compounds, collectively known as curcuminoids, which is a mixture of curcumin, demethoxycurcumin and bisdemethoxycurcumin. It is the Best salt for Diabetes patients Helps in Medication. Best Seeds for Digestion Himshakti Perilla seeds- 100gms (Healthy spice) Bhangjeera seeds or known as Perilla seeds are worldwide famous still on verge of extinction in India, have numerous benefits unutilized and unknown! 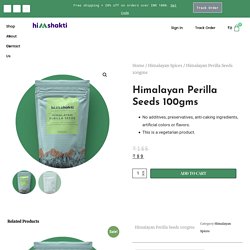 Himalayan Perilla seeds are known for its traditonal value and is often recognized as blessing in disguise.They are best seeds for digestion It contains Unsaturated fatty acids in perilla seed oils is typically over 90%, contains considerably high levels of α-linolenic acid (ω-3 fatty acid) (α–LNA) ranges from 52.58% to 61.98%. The seeds have good nutritional value, such as ash content 2.2%, crude fiber 23.28%, crude protein 5.12%, true digestibility of the seed protein 82.6%, carbohydrates 18.53%, and minerals like calcium, magnesium, potassium etc. Perilla frutescens is higher in ALA content (alpha-Linolenic acid)-containing as much as 60 percent of the healthy fat. 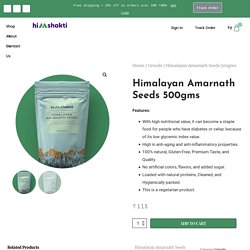 Amaranth is one of the richest plant forms of protein available. The protein is easily absorbed by the body and contains all amino acids — even lysine, which is often missing from cereal grains.Gluten free seeds for your healthy day Similarly,Rich in antioxidants, including gallic acid and vanillic acid.It helps fight free radicals, which are damaging by-products of normal cellular activity.Moreover,helping to reduce everything from signs of aging to heart disease.It has an anti-inflammatory effect on the human body Rajgira seeds(Amaranth) is a good source of promoting antioxidants.However,Amaranth is a complete protein with all nine essential amino acids.Amaranth is gluten-free.In addition,Amaranth seeds provides necessary vitamins, minerals and fiber.In other words, Nutrient Value in 100 grams of Amaranth. Best Himalayan Green Tea for Weight Loss - Himshakti -100gms (Herbal) Discover a delectable earthy flavor in every sip of Himshakti Himalayan Green Tea, sourced from the foothills of the mighty Himalayas. 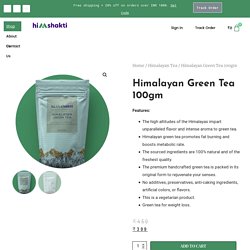 The Himalayan region boasts of a special soil type and climate, which brings out the character of the tea. This is known to be good with people who want to be in shape and acts as weight loss tea. Best Salt for Diabetes - Himalayan organic Turmeric Salt - 100gms. Red Pepper -Himshakti Sichuan Pepper (Spices) - 100gms. Himalayan Sichuan pepper is an important component in five-spice powder, which you will find in many Asian recipes. 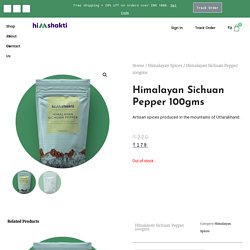 Sichuan peppers have certainly gained most recognition in the culinary world. It is toothache shrub found at height of 1000 to 2000m elevations mainly in Uttrakhand. It is also known as Red pepper which has amazing medicinal benefits. Get Himalayan Pink Salt (high Ph value) -Himshakti Kshaar Salt -1kg. The Healthiest Himalayan Pink Salt Kshaar is a Sanskrit word which means alkalinity. 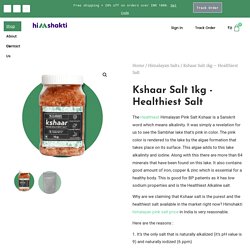 It was simply a revelation for us to see the Sambhar lake that’s pink in color. The pink color is rendered to the lake by the algae formation that takes place on its surface. Turmeric powder - Himalaya Himshakti Haldi powder- 100gms. Turmeric powder gives a tasteful experience in the Indian cuisine through the delicious flavor of Himalayan herbs. 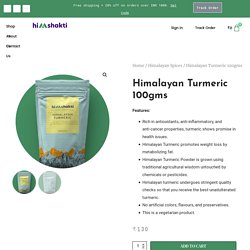 The bright orange bioactive ingredient in turmeric, Curcumin, has shown a diverse range of benefits ranging from mitigating inflammation due to arthritis to limiting the growth of blood vessels that cause tumors. The spice known as turmeric may be the most effective nutritional supplement in existence. Himalayan Turmeric boosts energy levels, improves digestion, regulates menstruation, dissolves gallstones, treats liver ailments, and provides respite in urinary tract infections. Besides incorporating into foods, adding a little pinch of turmeric to warm milk or to boiled water for inhalation can heal common cold and sore throat and keep infections at bay.Turmeric powder also boosts immunity levels.

It has anti-bacterial, anti-viral and anti-fungal properties. Healthy Rice Alternative Red rice Himshakti Himalayan - 500gms. Red Rice Uttarakhand grown in the high valleys of the Himalayas, is an effortless supplement to your daily meals. 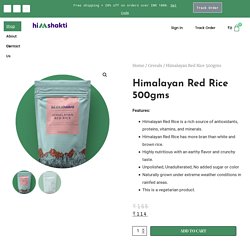 One serving of Himalayan red rice for weight loss contains 200 calories, which is much lesser compared to white rice, hence, lowers the risk of obesity. It is considered a Healthy Rice alternative The rich red color of red rice is due to loaded iron and minerals. It has a low caloric density in comparison to other foods, thereby making it an excellent food for weight loss.Red rice for diabetics has a low glycemic index which helps in keeping the sugar level balanced, making it ideal for diabetics. It is high in fiber content and complex carbohydrates, which can help meet your daily fiber requirement, thereby aiding digestion and preventing obesity. 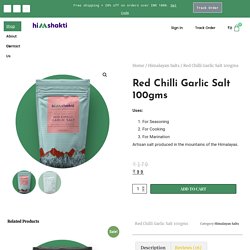