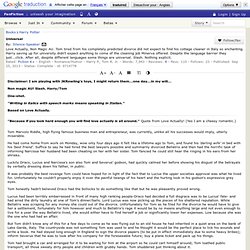 Non magic AU! Slash. Harry/Tom One-shot. "Writing in italics with speech marks means speaking in Italian. " Based on Love Actually. "Because if you look hard enough you will find love actually is all around. " Tom Marvolo Riddle, high flying famous business man and entrepreneur, was currently, unlike all his successes would imply, utterly miserable. He had come home from work on Monday, wow only four days ago it felt like a lifetime ago to Tom, and found his 'darling wife' in bed with his 'best friend'. Luckily Draco, Lucius and Narcissa's son also Tom and Severus' godson, had quickly calmed her before showing his disgust of the betrayals by verbally dressing down his father, in public. 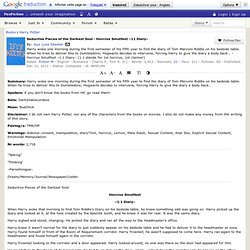 When he tries to deliver this to Dumbledore; Hogwarts decides to intervene, forcing Harry to give the diary a body back… Spoilers: if you don't know the books from HP, go read them! Beta: DarkSnakeLordess Muse: Budchick Disclaimer: I do not own Harry Potter, nor any of the characters from the books or movies. Pairing/s: TMR/HP Warnings: dubious consent, manipulation, diary! Nr words: 2,718 "Talking" 'Thinking' –Parseltongue– Dream/Memory/Journal/Newspaper/Letter Seductive Pieces of the Darkest Soul Horcrux Smutfest –1.1 Diary– When Harry woke that morning to find Tom Riddle's Diary on his bedside table, he knew something odd was going on.

Harry sighed and stood, changing. Harry knew it wasn't normal for the diary to just suddenly appear on his bedside table and he had to deliver it to the headmaster at once. Love and Forget: These Loving Memories Chapter 1: White, a harry potter fanfic. -Love and Forget: These Loving Memories-By: Concubine99 Disclaimer:I do not own Harry Potter or its context. 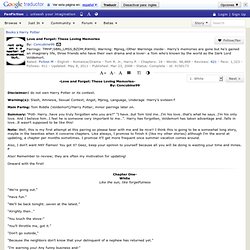 Warning(s): Slash, Amnesia, Sexual Context, Angst, Mpreg, Language, Underage -Harry's sixteen-f Main Paring: Tom Riddle (Voldemort)/Harry Potter; minor pairings later on. Summary: "Pott- Harry…have you truly forgotten who you are? " "I have…but Tom told me…I'm his love…that's what he says…I'm his only love. Note: Well, this is my first attempt at this pairing so please bear with me and be nice!! Also, I don't want ANY flames! Also! Onward with the first! Chapter One-WhiteLike the sun, like forgetfulness "We're going out. " "Have fun. " "We'll be back tonight…seven at the latest. " "Alrighty then…" "You touch the stove-" "You'll throttle me, got it.

" "Don't go outside," "Because the neighbors don't know that your delinquent of a nephew has returned yet. " A Twist in Time Chapter 1, a harry potter fanfic. Dumbledore's office looked just the same. 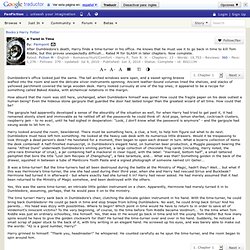 The tall arched windows were open, and a sweet spring breeze wafted into the room and sent the delicate silver instruments spinning. Ancient leather-bound volumes lined the shelves, and stacks of yellowed parchment covered the large wooden desk. Harry looked curiously at one of the top ones; it appeared to be a recipe for something called Baked Alaska, with alchemical notations in the margin. How absurd that the room was still here, unchanged, when Dumbledore himself was gone!

How could the fragile paper on his desk outlast a human being? Harry looked around the room, bewildered. It was a time-turner! Yes, this was the same time-turner, an intricate little golden instrument on a chain. The time turner! Harry grinned to himself. Harry Potter. Generation Anime.