I am from Kathmandu Nepal. I am tourism entrepreneur. Organizing Nepal, Tibet and Bhutan tour packages according to travellers holiday schedule.

Safari Tour : Himalayan Smile Treks. Jungle safari Nepal is one of the interesting and adventurous activities in Nepal. 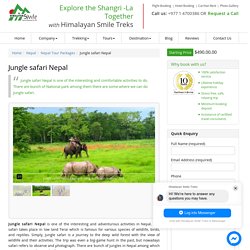 The safari takes place in low land Terai which is famous for various species of wildlife, birds, and reptiles. Simply, jungle safari is a journey to the deep wild forest with the view of wildlife and their activities. The trip was even a big-game hunt in the past, but nowadays safari refers to observe and photograph. Nepal Buddha : Himalayan Smile Treks. Lumbini tour can explore, the birthplace of Lord Gautam Buddha is one of the major Buddhist pilgrimage sites in Nepal. 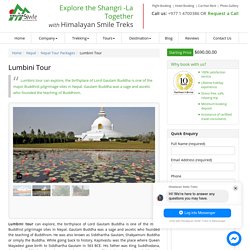 Gautam Buddha was a sage and ascetic who founded the teaching of Buddhism. He was also known as Siddhartha Gautam, Shakyamuni Buddha or simply the Buddha. While going back to history, Kapilvastu was the place where Queen Mayadevi gave birth to Siddhartha Gautam in 563 BCE. His father was King Suddhodana, the leader of Shakya clan whose capital was Kapilvastu. Janakpur Nepal : Mithila Sita Mandir. Janakpur Nepal is a center for religious and cultural tourism which is located 225 km south-east of Kathmandu. 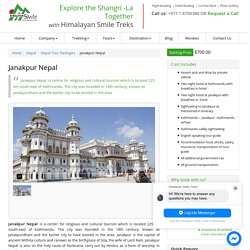 The city was founded in the 18th century, known as Janakpurdham and the earlier city to have existed in the area. Janakpur is the capital of ancient Mithila culture and renown as the birthplace of Sita, the wife of Lord Ram. Janakpur Nepal is also on the holy route of Parikrama carry out by Hindus as a form of worship in Ayodhya, Kashi, and Brij in India as well. Pokhara Tour Packages : Himalayan Smile Treks. Sarankot After breakfast a short drive to the nearby scenic hills of Pokhara valley at Sarankot altitude of 1,460 meters at least 500 m higher above Pokhara valley and its beautiful Phewa lake, a stunning spot for overwhelming panorama catching the sunrise where it hits the tall Annapurna mountain range from Annapurna I (8,091m / 26,545ft) Annapurna South (7,219m-23,693ft), Gangapurna (7,455m-24,457ft) and Annapurna III (7,555m-24,787ft) stretching to Mt. 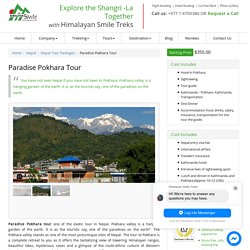 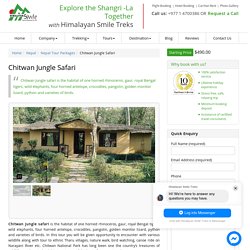 In this tour you will be given opportunity to encounter with various wildlife along with tour to ethnic Tharu villages, nature walk, bird watching, canoe ride on Narayani River etc. Chitwan National Park has long been one the country’s treasures of wildlife wonders. Indeed this tour is one of the best of every nature lover. The Chitwan jungle safari Park situated in the tropical and sub-tropical inner Terai lowlands of southern central part of Nepal. The Park consists of the Churia hills, flood plains of the Rapti river. Chitwan Jungle safari Park you can drive or fly from Kathmandu, the distance between Kathmandu and Chitwan National Park is just 169 km. 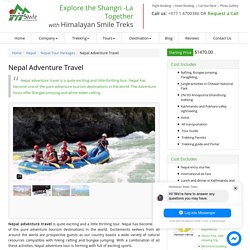 Your hotel is around 7 km away so will take at least 25 minutes to reach. After you cross inside the tourism hub Thamel, you will check-in to the hotel and take some rest inside your hotel room. Orientation program After refreshing yourself, leave the hotel and visit our office at Seven Corner Street, Thamel. Swayambhunath sightseeing Depending on your arrival in Kathmandu, you will visit Swayambhunath stupa. 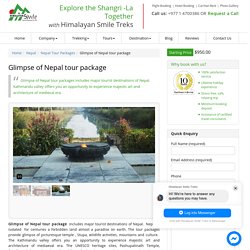 Nepal is isolated for centuries a forbidden land almost a paradise on earth. The tour packages provide glimpse of picturesque temple , Stupa, wildlife activities, mountains and culture. The Kathmandu valley offers you an opportunity to experience majestic art and architecture of mediaeval era. The UNESCO heritage sites, Pashupatinath Temple, Boudhanath Stupa, Syambunath and Patan Durbar Square are the must go to places here. Nepal Tour 3 night 4 days : Guided by Himalayan Smile Treks. Kathmandu Valley Sightseeing You will be picked up by tour guide and drive through the private vehicle for the sightseeing. 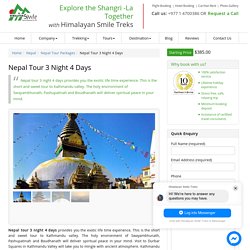 You will visit the largest stupa in the world ‘Boudhanath Stupa’ nearly 5 km drive from Thamel. This is one of the largest unique structure in the world. There are many gompas, monasteries, thanka school, restaurants, cafes, lodges, etc. Boudha is based on Tibetan Buddhist culture and is visited by many lamas, monks, as well as locals and tourists. After Pashupatinath, drive to the major Hindu temple of Lord Shiva ‘Pashupatinath’. Nepal Tour 2 Night 3 days : Guided by Himalayan Smile Treks. 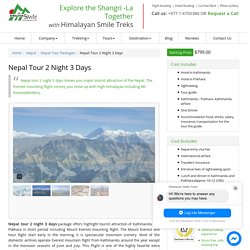 Early morning drive to Sarangkot. Enjoy stunning sunrise views of Mt. Annapurna and the other Himalayas. The Sarangkot is a famous Hill station nearby Pokhara city at an altitude of 1600 meter from sea level. From Sarangkot you can observe beautiful sunrise over Annapurna mountains. If time is permitted, sail one-hour boating in Phewa Lake. Fly to Kathmandu. Fly Pokhara to Kathmandu.

Nagarkot 1 night / 2 days tour package. Bhaktapur sightseeing Bhaktapur Darbar Square contains many showpieces art,architecture and historical monuments amoung them we are going to discover some of the prominent sites which are : the palace of 55 windows, Golden Gate, National art gallery, Nyatpole,Pottery Square etc. 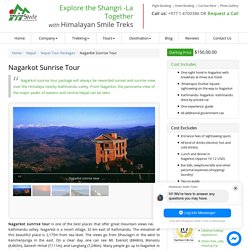 Sunrise view from Nagarkot Early morning at the crack of dawn starting the day with super sunrise views over the central and eastern Himalaya which extends all the way to Everest region towards far eastern horizon. Kathmandu valley sightseeing Patan Durbar Square After breakfast a scenic and interesting drive leads through the outskirt of Kathmandu city, leading to Nepal 2nd largest city in Patan which is a mere distance from south of Kathmandu separated by Bagmati River.

An interesting Patan city known as well Lalitpur ‘City of Arts” where you can observe handicrafts being made, Patan a city of beauty and grace and is planned on a circular format with Buddhist stupa’s at each of the four points. Like Kathmandu, its most photogenic centre of attraction is its Durbar Square complex, situated right in the middle of the market place. Family Adventure Trip to Himalaya. Family adventure holiday Mount Everest : Himalayan Smile Treks. Family holiday Tour Package in Nepal. Family holiday packages is in Nepal can enjoy all family members without any disturbance, the package dedicated to the family. It is combined with nature hiking , adventure and wildlife activities in Nepal. Family Holiday Package is a special package designed by Himalayan Smile for your happy and smiling family. As you know Nepal is rich in cultural diversity and follows the relation of brotherhood, making the plan of family holiday in this country Nepal is the best holiday package you are planning ever.

Family Holidays Package provides an unbeatable experience with lots of enjoyment and entertainment. As this Family Holiday Package is for family we have managed in a proper way so that each member can enjoy the trip equally. Gosaikunda Lake : Himalayan Smile Treks & Adventure. Dhunche to Sing Gompa (3,250m) by walk / 5.5 hrs walk / Overnight at mountain lodge. Instant ABC Treks : Himalayan Smile Treks.

Changunarayan Nagarkot - Himalayastrek. Nagarkot Changunarayan trek is the nearest hill for the Nepal short trek which is held inside the Kathmandu valley. Nagarkot is popular for a stunning sunrise and sunset view and is one of the most popular hill stations. Situated at an altitude of 2,175m from the sea level and 32 km from Kathmandu this small hill station provides a spectacular view of the northern mountain, sunrise, and sunset. Whereas, Changu Narayan is the historic temple found till date in Nepal and is dedicated to Lord Vishnu.

The difference between these two prices is only two services. In Gold price, during trekking, we provide you with accommodation in a tea house and all meals (breakfast, lunch, and dinner). But in Silver price, the trekkers should pay by themselves the expenses of their meals and accommodation in tea house while you're on trekking days. But other services which are included in the Gold price are also included in the Silver price. Langtang : Himalayan Smile Treks. Ghorepani : Himalayan Smile Treks. Ghandrung Village : Himalayan Smile Trek. World highest lake situated at Nepal. Mardi Himal Nepal : Himalayan Smile Treks. Monkey temple Swaymbu is one of the ancient and religious site in Nepal. It is located in atop of the hill. Swaymbu means self originated – swaymbu Puran, one of the religious book believes it is self-existent one. It is also popular as Money temple among the visitor from abroad.We will see many interesting things around the Swaymbunath stupa which are: The main stupa is dome shaped stupa surrounding 5dhyani Buddha, two tall shikhara style temple: Kabindrapur and Annantapur, Harati temple, the huge gold plated Thunderbolt, sleeping Buddha and so many things.