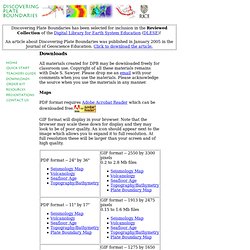 Copyright of all these materials remains with Dale S. Sawyer. Please drop me an email with your comments when you use the materials. Please acknowledge the source when you use the materials in any manner. Maps PDF format requires Adobe Acrobat Reader which can be downloaded free. GIF format will display in your browser. Student Handouts Wrap-up Overhead Transparencies (in PDF format) Understanding Plate Motions. Scientists now have a fairly good understanding of how the plates move and how such movements relate to earthquake activity. 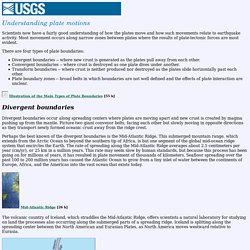 Most movement occurs along narrow zones between plates where the results of plate-tectonic forces are most evident. There are four types of plate boundaries: Divergent boundaries -- where new crust is generated as the plates pull away from each other. Types of Boundaries. Crustal Deformation Processes: Folding and Faulting.

The topographic map illustrated in Figure 10l-1 suggests that the Earth's surface has been deformed. 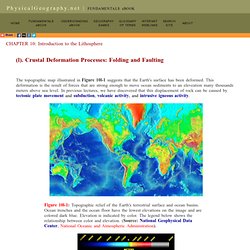 This deformation is the result of forces that are strong enough to move ocean sediments to an eleveation many thousands meters above sea level. In previous lectures, we have discovered that this displacement of rock can be caused by tectonic plate movement and subduction, volcanic activity, and intrusive igneous activity. Plate Map. Fault Laboratory. Interactive Fault Map. 1000 km. 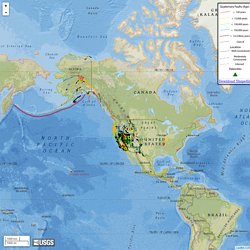 Engineering for Earthquakes. Earthquake in a Box. Faults and Earthquakes - DLESE Teaching Boxes. A Model of Three Faults. Grades 7-12. 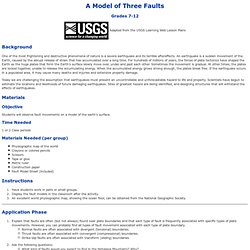 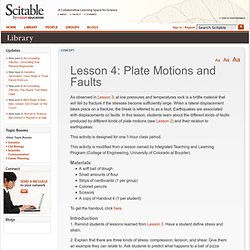 Divide your students into three groups (Group 1, 2, and 3). Hand each group one strip of cardboard, one pair of scissors, and colored pencils. 2. In Group 1, instruct one student to color a road with several houses along it on their piece of the cardboard. Types of Faults Coloring. Faults Study Guide. Modeling Folding and Faulting (Video) Faulting and Folding Animation. Savage Earth: Restless Planet. Groundshaking is not the only hazard people face during earthquakes. 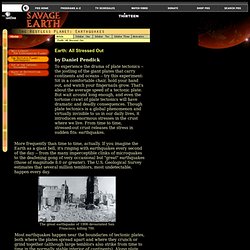 They can also trigger landslides. In 1692, the town of Port Royal, Jamaica, slid into the sea and came to rest 50 feet below the surface. Marine sediment quickly entombed the town, turning it into an undersea Pompeii: In 1959, archaeologists found a pot of turtle soup in one buried home, still sitting in its copper kettle. Dynamic Earth . Slip, Slide, & Collide. Faults. Printer-friendly version In the articles you just read, the authors assume you know something about faults: how they are classified, what kind of motion they experience, what sense of stress they feel, and how to recognize them on a map. 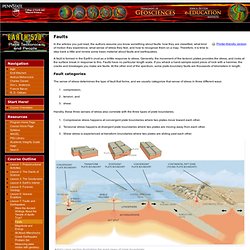 Therefore, it is time to step back a little and review some basic material about faults and earthquakes. A fault is formed in the Earth's crust as a brittle response to stress. Generally, the movement of the tectonic plates provides the stress, and rocks at the surface break in response to this. Faults have no particular length scale. Fault categories. Secrets of the Oracle — History.com Video. Delphic Oracle. Scientific American - Questioning the Delphi Oracle. New evidence of the geological origins of the ancient Delphic oracle (Greece) Folds, Faults and Mountains. Faults of the Earth. Earth Movements. Earth movements Brief description This unit deals with the formation of features on the earth's surface. 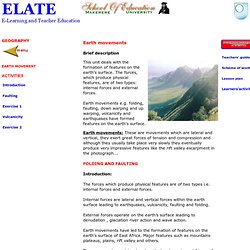 What are the 4 basic classes of faults? Earthquake Faults For background on this animation series, download Background from the Resources box.Animations are available for preview in embedded YouTube. 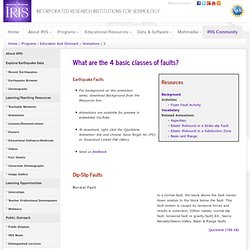 With the recent earthquakes in Haiti, New Zealand and Japan, Americans may wonder if or when such a disaster will or might happen closer to home. While most Americans know of the potential for earthquakes along the West Coast’s San Andreas Fault, fewer realize that a major fault line lies near Memphis, Tenn. The New Madrid (MAH dred) fault is one of the most dangerous in the world. Located beneath the upper end of the Mississippi delta, the fault extends from Cairo, Ill., to Marked Tree, Ark., a distance of 130 miles (220 km). Geologists and other scientists have studied the New Madrid for many years. Undersea Geology. 1. Brainstorm and define underwater landforms. Explain to students that they will be exploring Earth's ocean floor and the types of geologic activity that occur there. Have students imagine what the ocean floor might be like. Ask: What types of landforms are there on the ocean floor? Students may suggest there are mountains, valleys, or flat areas.

Rift valley. A rift valley forms where the Earth’s crust, or outermost layer, is spreading or splitting apart. This kind of valley is often narrow, with steep sides and a flat floor. Rift valleys are also called grabens, which means “ditch” in German. While there is no official distinction between a graben and a rift valley, a graben usually describes a small rift valley. Seafloor spreading. The San Andreas Fault - Contents. San Andreas Fault May Be Rare Quake "Superhighway" August 16, 2007 Some faults can send earthquakes zooming along the ground faster than the speed of sound, scientists say—and California's San Andreas Fault may be one of them. Most earthquake faults "unzip" at around 2 miles (3 kilometers) a second. But evidence is growing that some faults can send quakes zooming much faster—up to 3.7 miles (6 kilometers) a second. "They are moving faster than the speed of sound, like a sonic boom," said Shamita Das, a seismologist at Oxford University in the U.K.