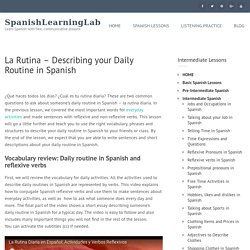 ¿Cuál es tu rutina diaria? These are two common questions to ask about someone’s daily routine in Spanish – la rutina diaria. In the previous lesson, we covered the most important words for everyday activities and made sentences with reflexive and non-reflexive verbs. This lesson will go a little further and teach you to use the right vocabulary, phrases and structures to describe your daily routine in Spanish to your friends or class. 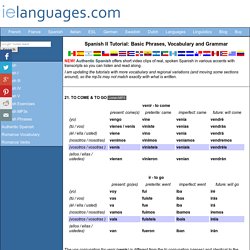 Authentic Spanish offers short video clips of real, spoken Spanish in various accents with transcripts so you can listen and read along. I am updating the tutorials with more vocabulary and regional variations (and moving some sections around), so the mp3s may not match exactly with what is written. 21. To Come & to Go The vos conjugation for venir (venís) is different from the tú conjugation (vienes) and identical to the vosotros form in the present tense, but the tú and vos conjugations are identical for ir (vas).

Preposiciones en español, tabla 16. Pronombres personales, reflexivos y recíprocos, tabla 6. Curso de Español Comunicativo - Ejercicio 7.11. Aprender español gratis. Spanish for Beginners. Introduction In part one of this course you have seen some of the basics of the Spanish language. 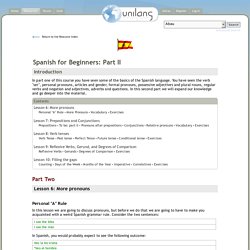 You have seen the verb "ser", personal pronouns, articles and gender, formal pronouns, possessive adjectives and plural nouns, regular verbs and negation and adjectives, adverbs and questions. In this second part we will expand our knowledge and go deeper into the material. Contents Part Two Lesson 6: More pronouns Personal "A" Rule In this lesson we are going to discuss pronouns, but before we do that we are going to have to make you acquainted with a weird Spanish grammar rule. In Spanish, you would probably expect to see the following outcome: The first translation is perfectly correct, but the second, contrary to what you expect, is NOT! As the asterisk shows, this is still not entirely correct. More Pronouns In Lesson 1, we learned about personal pronouns. Note that all of these pronouns appear in the subject position of the sentence, although they are usually omitted: Vocabulary Exercises Means. 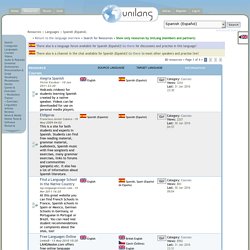 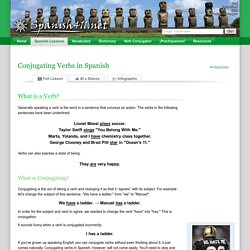 Generally speaking a verb is the word in a sentence that conveys an action. The verbs in the following sentences have been underlined: Lionel Messi plays soccer. Taylor Swift sings "You Belong With Me. " Marta, Yolanda, and I have chemistry class together. Verbs can also express a state of being: They are very happy. What is Conjugating? Conjugating is the act of taking a verb and changing it so that it “agrees” with its subject. We have a ladder. → Manuel has a ladder. In order for the subject and verb to agree, we needed to change the verb "have" into "has.

" It sounds funny when a verb is conjugated incorrectly: I has a ladder. If you've grown up speaking English you can conjugate verbs without even thinking about it; it just comes naturally. Infinitives A non-conjugated verb is known as an “infinitive.” Unlike English infinitives, Spanish infinitives are only one word, but they’re still pretty easy to spot. Spanish Verb Charts {The Irregular Indicative} Have you seen my other free printable of Spanish verbs? 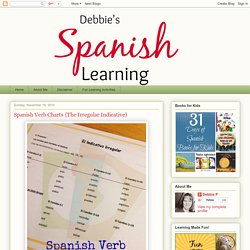 Sometimes it is helpful to have charts of the different tenses condensed for students. It can get confusing to keep it all straight as a student is trying to master the language. Last time I posted all the regular verbs. This time you can print off these charts of the irregular verbs in the indicative. {This post contains affiliate links. El presente - práctica. Spanish Grammar. Home / Grammar Find topics in left sidebar. 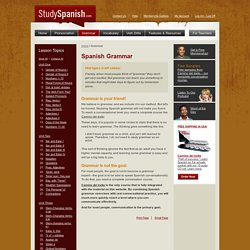 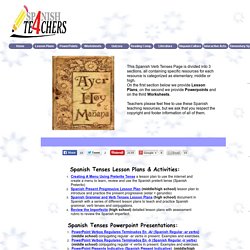