Both and Either or Neither nor. Either, Neither or Both. Question tags. Exercise on Question Tags. What Are Relative Pronouns? Our Story Relative Pronouns A relative pronoun is a pronoun that heads an adjective clause. 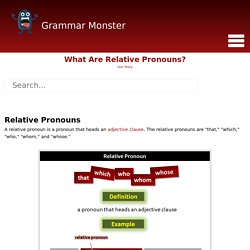 Why Should I Care about Relative Pronouns? Here are the six most frequently asked questions related to relative pronouns: (Question 1) Do you put a comma before "which"? Top Tip Another Top Tip Yes. See Also. Relative pronouns - who, which, whose - Exercise. Conditionals - zero, first & second conditionals. Conditionals. Zero, First, and Second Conditional (Study English Today) 1. 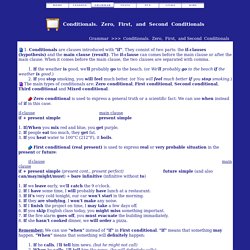 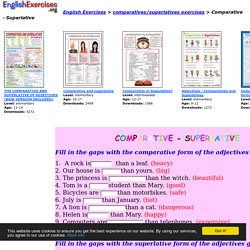 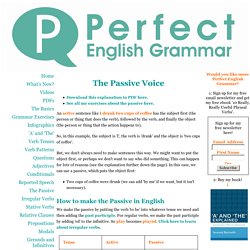 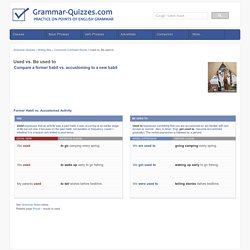 (Azar 14-2 "Using Gerunds as the Objects of Prepositions) be used to doing something. be accustomed to doing something. be commited to doing something In linguistic description, used to is an adjectival passive followed by an infinitival nonfinite clause (a "reduced" clause). used to We are used to [warm weather/ going to the beach.] adjectival passive + PP + NP / nonfinite clause (infinitival) "There are a few adjectives that are morphologically related to the past participles of verbs but whose meaning has changed so that they are no longer comparable to verbal passives with the same form and its connection with passives proper is purely historical. " bound, engaged, meant, numbered, related supposed, used (Huddleston 16 §10.1.3) We are engaged to be married. / He was supposed to be… / He was bound to leave… / He was meant to lead…