Housing First is a model for people with multiple needs beyond housing. It is built on seven principles which are central to ending people’s experience of homelessness: •People have a right to a home •Flexible support is provided for as long as is needed •Housing and support are separate •Individuals have choice and control •An active engagement approach is used •The service is based on people’s strengths, goals and aspirations •A harm reduction approach is used.

Homelessness in Scotland can end in a decade, say campaigners. The Everyone Home Collective has laid out a roadmap setting out the steps to ending homelessness ahead of Holyrood elections next May Scotland can be free from homelessness inside the next decade – if MSPs follow a new roadmap proposed by 30 charities, academics and experts. 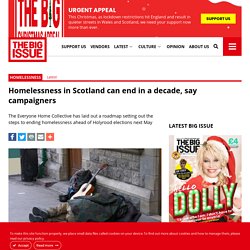 The Everyone Home Collective has urged all political parties to back their plan for the next two parliamentary terms to ensure no one goes without a home. “Homelessness is not inevitable, or an unsolvable problem,” said Maggie Brünjes, chief executive at Homeless Network Scotland. “The causes are predictable and we know who is most at risk – we can end homelessness in Scotland over two parliaments. “Sustaining the cross-party accord on tackling homelessness that underpins the current approach in Scotland, and continuing this into the next Parliament and beyond, would provide consistency and stability.” MSPs urged to support plan to end homelessness in Scotland. Thirty organisations, including charities, experts and people with lived experience, have teamed up to call on political parties to support the new route map. 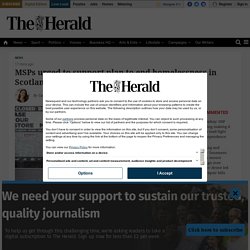 Published by Everyone Home Collective, the group hopes all parties will support five key actions over two parliamentary terms: prioritising prevention; providing more homes; ending rough sleeping; no evictions into homelessness; and a systems change. Maggie Brunjes, chief executive of Homeless Network Scotland, said: “Homelessness is not inevitable, or an unsolvable problem. Eveningexpress.co. Thirty organisations have teamed up to call on political parties to get behind a 10-year plan to end homelessness. 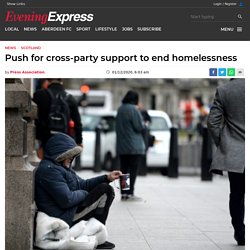 The 30 groups, which include charities, experts and people with lived experience, are asking MSPs and candidates in next year’s Scottish Parliament elections to support a new route map. Published by Everyone Home Collective, the group hopes all parties will support five key actions over two parliamentary terms: prioritising prevention; providing more homes; ending rough sleeping; no evictions into homelessness; and a systems change.

Delivering the social and affordable homes we need is the only way to tackle the root causes of rising homelessness Alison Watson Maggie Brunjes, chief executive of Homeless Network Scotland, said: “Homelessness is not inevitable, or an unsolvable problem. Letters: MSPs must vote to retain temporary safeguards to ensure we do not see a return of the scourge of homelessness. WE are urging members of the Scottish Parliament support extending an important aspect of Scotland’s coronavirus response. 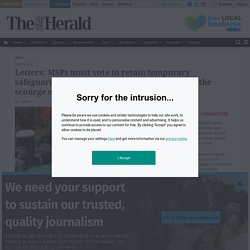 MSPs can help prevent an increase in homelessness this autumn by supporting an extension to temporary safeguards relating to evictions, set to be reviewed by the Scottish Parliament this week. A second wave of new eviction cases that may result from the social and economic impact of Covid-19 can be mitigated by Parliament extending the provisions from September 30 to April 2021 in the first instance. This was also a key recommendation of the expert Homelessness & Rough Sleeping Action Group. Preventing homelessness could start at primary school. Routinely talking to primary school children about homelessness could prevent such problems later in life, according to the Homeless Network. 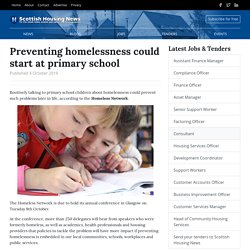 The Homeless Network is due to hold its annual conference in Glasgow on Tuesday 8th October. At the conference, more than 250 delegates will hear from speakers who were formerly homeless, as well as academics, health professionals and housing providers that policies to tackle the problem will have more impact if preventing homelessness is embedded in our local communities, schools, workplaces and public services. Those unable to attend can use the hashtag #prioritiseprevention to join in the debate throughout the day.

Through personal testimony, question and answer sessions, workshops and knowledge-sharing the event will explore and identify early opportunities to prevent homelessness long before it occurs. Why I volunteer: The answer to homelessness is providing a home. OVER the past few weeks I’ve been going along to residential homelessness services that are closing to make way for change, to talk to staff and residents. 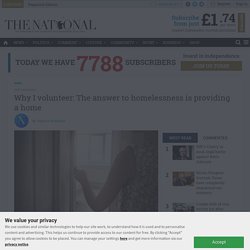 As a volunteer I’m trained to assist and speak up for people who are homeless. It helps that I myself have first-hand experience of being homeless and have lived in supported accommodation too. My message is that it’s time to embrace change. Too many Scots are still institutionalised – we’ve closed the Victorian asylums and orphanages but many homeless hostels are still here, in our modern cities. Sometimes people working in this sector can feel that way too. But things are changing.

It brings potentially ground-breaking positive change to this bad crisis, allowing people to move straight into their own home with professional support, designed for them and for as long as they feel they need help. For people in the places closing, this should be an exciting, optimistic time but what I’ve seen has not always been encouraging. 2019 09 Conference EveningTimes. Call for children to be taught about homelessness in class. Children in Primary school should be taught about homelessness as part of an effort to stop people suffering in the future, a conference will hear. 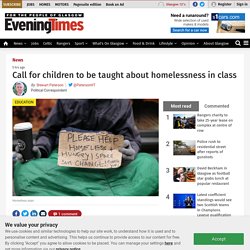 The Homeless Network holds its annual conference in Glasgow next week with a focus on prevention. The conference will hear from people with lived experience of homelessness and rough sleeping. Scottish Government Housing Minister Kevin stewart and from Sir Harry Burns, Professor of Global Public Health at Strathclyde University, will also address the conference. READ MORE: Charity leading the dementia fight David Ramsay, Change Lead with the Homeless Network will detail his own story of how he became homeless. #HousingFirstScot: Housing First Scotland Special Edition. To mark our support for the Housing First Scotland Annual Conference, Scottish Housing News is proud to dedicate today’s entire newsletter to Housing First. Are you a #HousingFirstScot? In this special edition we hear from just some of the people getting behind Housing First in Scotland: First Word The Minister for Local Government, Housing and Planning on Housing First on how we move to embed Housing First as the default response in Scotland.

A Normal Wee Place to Call Home In the last of four blogs leading up to the Housing First Scotland Conference, Maggie Brünjes, Chief Executive of the Homeless Network, sums up. Edinburgh hosts Housing First Scotland Conference. ORGANISERS are heralding a major conference held in Edinburgh today as a “turning point” in the bid to promote a “housing first” approach to ending homelessness in Scotland. 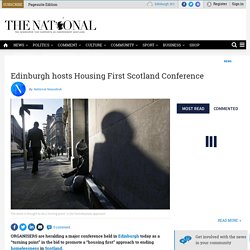 Government, charity, health and housing officials will gather in the city for the annual Housing First Scotland Conference. Speakers will include Scottish Cabinet Secretary Aileen Campbell, homelessness expert Sam Tsemberis and Maggie Brunjes, chief executive of the Homeless Network. The event aims to encourage a holistic approach to getting people off the streets, but one that, crucially, starts with the basic principle that everyone deserves the opportunity to live in adequate housing. Housing First Scotland Special Edition. 2019 05 Herald CIH. Why Housing First really matters for Scotland. BBC Scotland - The Nine, 01/04/2019, Could Housing First end homelessness in Scotland? 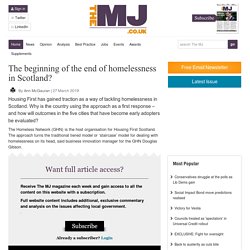 Keeping you up to date with breaking news, insightful analysis and thoughts from the top opinion formers in the sector, The MJ helps you do this. In addition, it also brings you examples of best practice and more job vacancies than any other weekly UK local government magazine. Make sure you subscribe today. New York expert: 'Scotland can end its homeless problem. There's no excuse' SCOTLAND can eradicate homelessness, according to the man who first developed a radical and much-celebrated housing solution that aims to get people off the streets and re-integrated into communities in homes of their own. 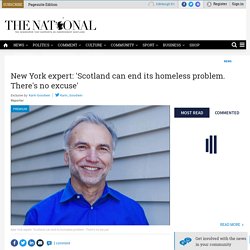 But it can only do so, claims Sam Tsemberis – the psychologist who founded the world’s first Housing First programme in New York – if there is sufficient political will, along with commitment to provide additional social housing, support services and funding to match. READ MORE: Glasgow cuts homeless cash by £2.6 million as part of new plan Tsemberis, founder and director of US-based Pathways to Housing, helped develop the ground-breaking approach, which worked with street homeless people who often had issues with mental illness and addiction, in New York in 1992.

The idea was born while he worked as part of a small team running a street-based “psychiatric emergency room” which saw 30-40 of the city’s most vulnerable every day. “It was very intense,” he said. 2019 04 SHN HFScotland. Housing First gathers pace with ambitious three-year plan - Scottish Housing News. Scotland could be free from the most visible and acute forms of homelessness within three years as the Scottish Government-backed Housing First Pathfinder programme officially ramps up in five cities: Aberdeen/shire, Dundee, Edinburgh, Glasgow and Stirling. The initiative is joint-funded by partners including the Scottish Government, The Merchants House of Glasgow, and Social Bite, which runs the Sleep In The Park events. Housing First provides mainstream housing with wrap-around support as a first response rather than the final step in a long process.

It is proven to be a better and more lasting response for people with experiences such as trauma, abuse, addictions and mental ill health. The target is to house 830 people by the end of the Pathfinder programme, and the remaining 27 Scottish councils are shaping up their plans to deliver Housing First in their areas. Mick Wright, one of these new tenants, said: “All I can say about Housing First is, it works. 2019 04 TFN HFScotland. Homelessness could vanish from Scotland's streets. The rollout of the Housing First initiative in Scotland is set to be stepped up, with a target of helping 830 people find homes 2nd April 2019 by Gareth Jones The most visible forms of homelessness could be gone from Scotland’s streets within three years.

The rollout of the Housing First scheme in Scotland could see visible and acute homelessness become a thing of the past, as work ramps-up in Edinburgh, Glasgow, Aberdeen, Dundee and Stirling. The Housing First Pathfinder – a Scottish Government backed programme created with support from The Merchants House of Glasgow, and Social Bite – is extending its work across Scotland after a successful nine-month initiation period.

Peace of mind. At its heart, #HousingFirst is about understanding that a safe home – rather than different forms of… #HousingFirst Scotland: The Movie! Want to catch up with our new Pathfinders and Leaders? Today is #HousingFirst day - no joke! We're marking day 1 ramping up Scotland's ambitious pathfinder. FIRST, Patric… Charities in plea for Scottish Government to extend evictions protections.

A COALITION of homelessness and housing charities and organisations have called on the Scottish Government to extend emergency powers to protect people against eviction – warning that “time is running out” for vulnerable families that fear they could lose their homes amid the incoming economic crisis. The plea comes as Glasgow University is exploring what impact the lockdown has had on those already isolated and marginalised. The study, funded by the Scottish Government, will focus on refugee and asylum processes, those facing domestic abuse or sexual violence, people with a disability or long-term health conditions and criminal justice controls.

The coalition is calling on Scottish Ministers to extend the protections and ensure that vulnerable households cannot be evicted until at least April 2021. Prevention on the agenda for Scottish Government homelessness talks. Everyone Home Collective publishes first route map to guide homelessness sector out of lockdown. Scottish charities join forces for ‘triple-lock’ to end rough sleeping. Everyone Home: Martin Gavin, Head of External Relations at Homeless Network Scotland. Martin Gavin: Deciding how to help might be ignoring the obvious. Homeless Network Scotland recently made over 1,000 cash payments of £100 to people affected by homelessness, thanks to the Scottish Government’s Wellbeing Fund, supported by SCVO and the Hunter Foundation.