Nwa-schweiz.ch - Nuclear Controversies. A plethora of reasons Investors should avoid nuclear power. 3 Reasons to Avoid Nuclear Power ByTravis Hoium, The Motley Fool There are three remaining reasons that I don’t think nuclear is a place investors should be looking for value right now. Costs are rising, not falling Compared to other alternative energy sources like wind and solar, whose costs are falling, nuclear is headed in the wrong direction.

It’s a dying business A look at how financial markets view nuclear power may give even the most hardened supporters pause. Criticism Of Fukushima Disaster Response Grows Worldwide. Greenpeace expert Ike Teuling did an on the ground investigation at Fukushima City, 60km from the nuclear plant. 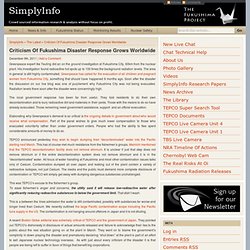 His investigation found radioactive hot spots up to 100 times the background radiation levels. The area in general is still highly contaminated. Greenpeace has called for the evacuation of all children and pregnant women from Fukushima City, something that should have happened 9 months ago. Soon after the disaster the discussion on our live blog was one of puzzlement why Fukushima City was not being evacuated.