Obamacare "wasn't fundamental change at all, just a big political mess": Steven Levitt. In their latest book, Think Like a Freak, co-authors Steven Levitt and Stephen Dubner tell a story about meeting David Cameron in London before he was Prime Minister. 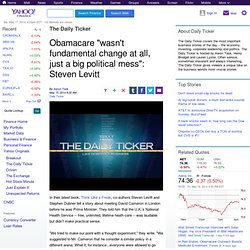 They told him that the U.K.’s National Health Service -- free, unlimited, lifetime heath care -- was laudable but didn’t make practical sense. "We tried to make our point with a thought experiment," they write. "We suggested to Mr. Cameron that he consider a similar policy in a different arena. What if, for instance...everyone were allowed to go down to the car dealership whenever they wanted and pick out any new model, free of charge, and drive it home? " Rather than seeing the humor and realizing that health care is just like any other part of the economy, Cameron abruptly ended the meeting, demonstrating one of the risks of 'thinking like a freak,' Dubner says in the accompanying video.

"I do not think it's a good approach at all," says Levitt, a professor of economics at the University of Chicago. Obamacare "wasn't fundamental change at all, just a big political mess": Steven Levitt. Newrepublic. Last week the liberal documentary-maker Michael Moore prompted indigestion across the progressive wonk community by pronouncing Obamacare “awful.” 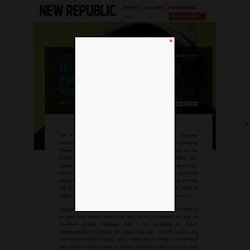 In a New York Times op-ed, he bemoaned the way the president’s law preserved the health insurance industry rather than replacing it with a Medicare-for-all style single-payer system. The good news, Moore conceded, is that the previously uninsured (and often previously uninsurable) can get finally get coverage. The bad news is that their coverage will often be lousy and pose an enormous financial burden. He ended by calling for activists to lean on state politicians in an effort to beef the law up. I happen to agree with Moore’s basic sentiment. And yet I’m still much more sympathetic to Obamacare than Moore. How? In some sense, Obamacare is the breast-and-cervical-cancer story writ large. In the heat of the political back-and-forth with Republicans bent on the program’s destruction, this whole Obamacare adventure can feel a little hopeless.

WhatsMyBrowser.org Is a Simple, Clean Site That Identifies Your Browser and More. Moms of Jonah Hill, Alicia Keys, Adam Levine, Jennifer Lopez: Enroll in Obamacare. Long before Maroon 5 singer Adam Levine was People Magazine’s “sexiest man alive,” he was “rambunctious, mischievous, naughty,” his mom Patsy Noah says in a new ad meant to get more young people to sign up for Obamacare. 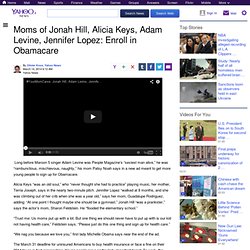 Alicia Keys “was an old soul,” who “never thought she had to practice” playing music, her mother, Terria Joseph, says in the nearly two-minute pitch. Jennifer Lopez “walked at 8 months, and she was climbing out of her crib when she was a year old,” says her mom, Guadalupe Rodriguez, adding: “At one point I thought maybe she should be a gymnast.”

Jonah Hill “was a prankster,” says the actor’s mom, Sharon Feldstein. He “flooded the elementary school.” “Trust me: Us moms put up with a lot. “We nag you because we love you,” first lady Michelle Obama says near the end of the ad. The March 31 deadline for uninsured Americans to buy health insurance or face a fine on their 2014 taxes is fast approaching. “Young people think they are invincible and impervious to injury. Obamacare's problem: You can't fix stupid—Commentary. (Read more: House GOP: How many have paid for Obamacare?) 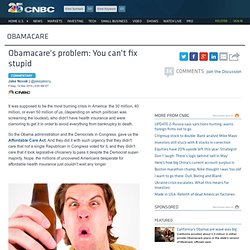 So when the Obamacare exchanges finally opened for business in October, of course the tens of millions of insurance-starved Americans stampeded over each other to sign up and finally get covered. Except they didn't. The reality has been shocking even to the biggest Obamacare detractors. A McKinsey Report estimates that just 10 percent of the roughly 4 million enrollees in the ACA are people that did not previously have health insurance. Just 1 in 10! Those 40 million to 50 million Americans just clamoring for health coverage that the Democrats have been telling us about since the 1940s have turned into just about 400,000 people who have bothered to sign up so far. (Read more: Who are these people? The experts have come up with several good explanations for the lack of interest among the uninsured.

We spend a lot of tax money in this country trying to stamp out stupid with varying degrees of success. So we should stop trying so hard. Pres. Obama on Galifianakis' Between Two Ferns.