Our Mission is to keep children safe at school, at home and in our communities by being the provider of a quality, innovative and inexpensive safety release coat hook to school boards, retailers and communities across the nation. 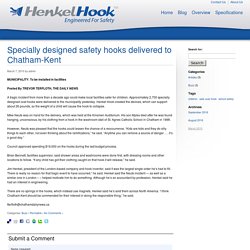 Approximately 2,700 specially designed coat hooks were delivered to the municipality yesterday. Henkel Hook created the devices, which can support about 26 pounds, so the weight of a child will cause the hook to collapse. Mike Neuts was on hand for the delivery, which was held at the Kinsmen Auditorium. However, Neuts was pleased that the hooks could lessen the chance of a reoccurrence. Council approved spending $19,000 on the hooks during the last budget process. Brian Bennett, facilities supervisor, said shower areas and washrooms were done first, with dressing rooms and other locations to follow. Jim Henkel, president of the London-based company and hook inventor, said it was the largest single order he’s had to fill. There are no springs in the hooks, which instead use magnets. Tterfloth@chathamdailynews.ca. Coat Hooks are for Coats, NOT Kids! - HenkelHook HenkelHook.

December 1992: Marilyn Dumas, a 9-year-old girl lost her life as she was accidentally hung on a coat hook while playing in a washroom stall at school. 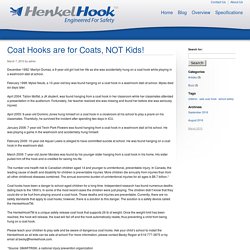 February 1998: Myles Neuts, a 10-year-old boy was found hanging on a coat hook in a washroom stall at school. Myles died six days later. April 2004: Tallon Moffat, a JK student, was found hanging from a coat hook in her classroom while her classmates attended a presentation in the auditorium. Fortunately, her teacher realized she was missing and found her before she was seriously injured. Collapsible coat hooks need schools' attention - HenkelHook HenkelHook. SAFETY: The safety hooks were developed after the death of Myles Neuts at St. 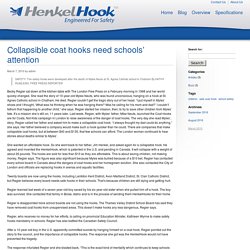 He died. She wanted an affordable hook. Twenty boards are now using the hooks, including Lambton Kent District, Avon Maitland District, St. Regier learned last week of a seven-year-old boy saved by his six-year-old sister when she pulled him off a hook. Regier is disappointed more school boards are not using the hooks. Regier, who receives no money for her efforts, is calling on provincial Education Minister, Kathleen Wynne to make safety hooks mandatory in schools. The response infuriated Regier and she blasted back. On the hook – Business London Article - HenkelHook HenkelHook. New Coat Hook Technology Reduces Risk in Schools - HenkelHook HenkelHook.

In February, 1998, a tragic death occurred in a Southern Ontario school. 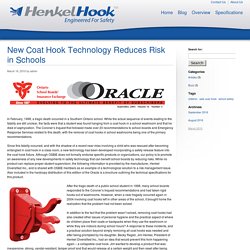 While the actual sequence of events leading to the fatality are still unclear, the facts were that a student was found hanging from a coat hook in a school washroom and that he died of asphyxiation. The Coroner’s Inquest that followed made over 20 recommendations to school boards and Emergency Response Services related to this death, with the removal of coat hooks in school washrooms being one of the primary recommendations. Tips for Creating a Safe Environment In and Out of the Classroom - HenkelHook HenkelHook. August 23, 2016 by admin The number one priority for teachers and administrators is to make sure that students have a safe environment where they can development academically and socially. 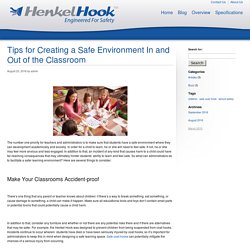 In order for a child to learn, he or she will need to feel safe. If not, he or she may feel more anxious and less engaged. In addition to that, an incident of any kind that causes harm to a child could have far-reaching consequences that may ultimately hinder students’ ability to learn and feel safe. So what can administrators do to facilitate a safer learning environment? Make Your Classrooms Accident-proof There’s one thing that any parent or teacher knows about children: if there’s a way to break something, eat something, or cause damage to something, a child can make it happen. In addition to that, consider any furniture and whether or not there are any potential risks there and if there are alternatives that may be safer.

Encourage Safety on the Playground. How the Henkel Hook Can Prevent Injury or Even Death from Bullying Tactics - HenkelHook HenkelHook. September 1, 2016 by admin Although bullying in school is nothing new, more students are being bullied than ever before. 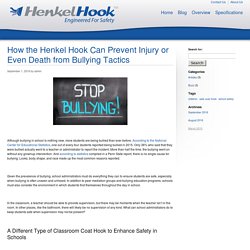 According to the National Center for Educational Statistics, one out of every four students reported being bullied in 2015. Only 36% who said that they were bullied actually went to a teacher or administrator to report the incident. More than half the time, the bullying went on without any grownup intervention. And according to statistics compiled in a Penn State report, there is no single cause for bullying. Given the prevalence of bullying, school administrators must do everything they can to ensure students are safe, especially when bullying is often unseen and unheard. In the classroom, a teacher should be able to provide supervision, but there may be moments when the teacher isn’t in the room. The HenkelHook™ addresses one bullying problem that has been an issue since the 1800s.