The History of Typography - Animated Short. Font pairings: 20 perfect examples. Finding font pairings that set each other off, don't fight the eye for attention, and harmonise without becoming homogenous and dull is tough for graphic designers. 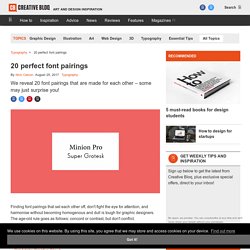 The age-old rule goes as follows: concord or contrast, but don't conflict. But with so many professional typefaces and free fonts to choose from, how do you find two that work in harmony? Here we bring you top font pairing tips, followed by 20 examples of perfect font pairings. Get Adobe Creative Cloud Tip 1: Use font superfamilies The easiest way to find perfect font pairings is by using different fonts within the same overarching typeface family. A good superfamily will include serif and a sans serif version of the same typeface: famous examples include Lucida/Lucida Sans and Meta/Meta Sans. Best free fonts for designers Tip 2: Pair contrasting typefaces Contrast, as the name implies, is about finding totally different, but still complementary typefaces that are each fit for their intended application. 01. 02. 03. 04. 05. 06. 3 ways to apply a line pattern effect on text in Illustrator.

A reader told me she used my command shape technique on a logo she was creating, but asked me if I knew a way where she could apply the lines inside the shape of the letters instead of applying them as a brush stroke. 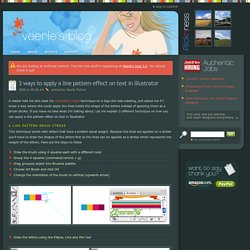 If you have no idea what I’m talking about. Let me explain 3 different technique on how you can apply a line pattern effect on text in Illustrator. A line pattern brush stroke This technique works with letters that have a prefect equal weight. Because the lines are applied on a stroke you'll have to draw the shapes of the letters first so the lines can be applied as a stroke which represents the weight of the letters. Draw the brush using 4 squares each with a different color Group the 4 squares (command/control + g) Drag grouped object into Brushes palette Choose Art Brush and click OK Change the orientation of the brush to vertical (upwards arrow) Draw the letters using the Ellipse, Line and Pen tool Text as a mask. 38 free retro fonts. There are hundreds of paid-for and free fonts available online, and we've got details of all sorts here on Creative Bloq – including tattoo fonts, cursive fonts and handwriting fonts. 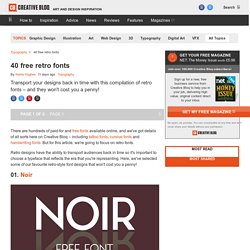 But for this article, we're going to focus on retro fonts. Retro designs have the ability to transport audiences back in time so it's important to choose a typeface that reflects the era that you're representing. FontForge Open Source Font Editor. Convert otf to ttf. 26 Free Condensed Fonts to Propel Your Next Project. Swistblnk — Freebies. 54 typographies gratuites pour Juin 2016. Vous l’attendiez peut-être alors voici une nouvelle sélection de polices d’écritures gratuites. 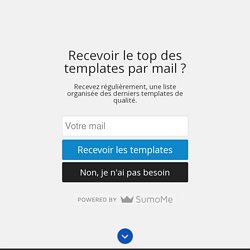 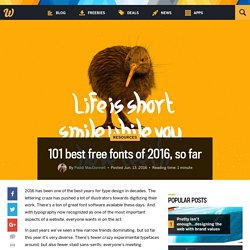 The lettering craze has pushed a lot of illustrators towards digitizing their work. There’s a ton of great font software available these days. And with typography now recognized as one of the most important aspects of a website, everyone wants in on the act. In past years we’ve seen a few narrow trends dominating, but so far this year it’s very diverse. There’s fewer crazy experimental typefaces around, but also fewer staid sans-serifs; everyone’s meeting somewhere in the middle. Browse through, try them out, and as always if you use them in a project, let us know! Why You Don’t Use Garamond on The Web. Amongst designers – especially print designers – Garamond is considered one of the best fonts in existence. 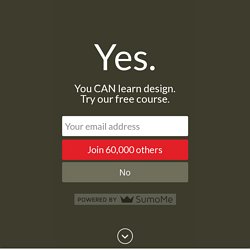 It’s timeless, and very readable. But, because of the limitations of current display technologies, it’s not a good font to use in web copy – even with the advent of font embedding methodologies such as TypeKit and Google Font API. One of the most important principles behind every good piece of design is that the designer has to master his or her medium. With any medium – whether it’s pencil and paper, steel and glass, or pixels – the designer has to work with strengths and limitations. 16 typographies de qualité pour vos créations en 2016 - L'Aetherium, Manufacture d'Image. Un de mes petits marronniers préférés : la typographie, et ça fait quelques mois que j’en avais pas reposté sur le blog. 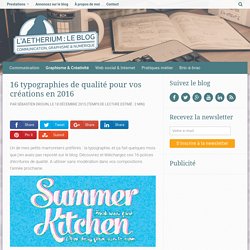 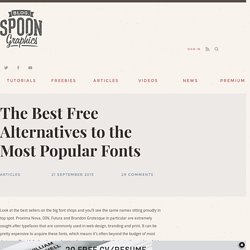 Proxima Nova, DIN, Futura and Brandon Grotesque in particular are extremely sought after typefaces that are commonly used in web design, branding and print. It can be pretty expensive to acquire these fonts, which means it’s often beyond the budget of most designers. 30 Inspirational Chalk Lettering Designs & Wall Murals. In this age of digital design I find the old analogue techniques of hand lettering and sign painting extraordinarily impressive. 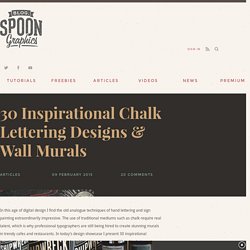 The use of traditional mediums such as chalk require real talent, which is why professional typographers are still being hired to create stunning murals in trendy cafes and restaurants. 60 Quality FREE Fonts You Probably Don't Own, But Should! Everyone loves free fonts, but finding high quality typefaces within the sea of amateur display fonts can be quite a challenge. 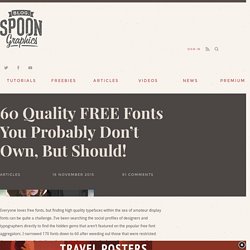 I’ve been searching the social profiles of designers and typographers directly to find the hidden gems that aren’t featured on the popular free font aggregators. I narrowed 170 fonts down to 60 after weeding out those that were restricted demos of premium fonts, those that required payment in the form of a tweet or email signup, and any that just didn’t pass my quality control test. Font Pairing Like a Pro - Part Two. Have you been playing with your font pairings and want to know which ones make harmonious duos? Ensuring your typefaces complement each other is a vital part of design. In a follow-up post to our most popular Canva post ‘Font Pairing like a Pro,’ we give you some more creative and super effective font pairings to use in your designs. To ensure you are familiar with the words used in this guide, we have included a new glossary with some feature terms from within this post.

The Ultimate Guide to Font Pairing. Great fonts are essential to great design. But picking great fonts can seem like an impossible dark art for most people. In the article below I’ll explain the basics of choosing great fonts and then give you my favorite combinations that you can use in your own designs. These font pairs are perfect if you are trying to create your next presentation, social media graphic or anything else you’d like to design. Of course, all of these fonts are available for you to use – for free – inside Canva. There’s a science to applying a heading, subheading and body copy to suit the type of content you’re producing and the message or tone of your brand. 10 Kerning Tips to Improve Your Typography. What’s your pet peeve? For regular people, pet peeves range from the improper use of their, there, and they’re to loud phone conversations people have in public places.

When it comes to designers, they have their own set of pet peeves as well. Some of the biggest and most common are kerning mistakes. The Best Free Alternatives to the Most Popular Fonts. Typo. La sélection des 60 plus belles typographies gratuites du web. 10 Best Free Online Tools for Designing Fonts. An Instagram generated font. 20 Best Web Fonts from Google Web Fonts and @font-face. At the moment there are several ways to use non-system fonts on a website. We will focus on the two least complicated, least expensive systems, Google Web Fonts and the @font-face rule.

Fear not, we have not ruled out other paid methods such as Typekit, Fonts.com Web Fonts, Fontdeck, Webtype, WebINK or Fontspring for future posts as they certainly offer high quality typefaces and deserve to be considered. It’s important to be aware that web fonts can generate inadequate visualizations on operating systems which have subpixel rendering turned off in the case of Windows XP. They can also be represented differently depending on the browser used to visualize them. The aim of this post is to facilitate the choice of a series of fonts (out of the hundreds available) whose technical and visual characteristics make them more readable and compatible with a wide variety of devices, browsers and operating systems.

Basically, there are two implementation models: Ces 11 polices d’écriture qu’on adore détester. Il y a des polices d’écriture qui souffrent tellement d’avoir été utilisées à outrance qu’elles en sont devenues détestables. Beaucoup penseront à la Comic Sans MS, mais elle n’est pas la seule. En voici quelques unes décrites avec humour. Choosing web fonts: 15 expert tips. Over the last few years, the possibilities for using type on the web have expanded enormously. In the bad old days of the web, designers were restricted to a few 'web safe' fonts, which meant everything looked pretty much the same, or using images to replace the type – a clunky solution that caused problems for the reader and technical problems in the browser. Nowadays, though, you can access an astonishing array of professional typefaces for use on your sites, bringing the aesthetics of print design to the web.

Exclusive: Fontspiration is a free app for typophiles everywhere. If you love typefaces as much as we do, then you’ll love this brand new typography app that has just been released; Fontspiration is a cool app for iOS boasting two features font lovers won’t want to miss. The first feature is a feed of typographic inspiration; amazing type-based work that you’ll get lost in for hours and come out the other side feeling truly inspired. The second feature actually allows you to quickly create typographic animations using hundreds of Google Fonts, and literally dozens of built-in animations, custom designed for this app. Built by Extensis, the team that brought you Suitcase Fusion and Universal Type Server, Fontspiration is the fastest way to mockup awesome typographic animations. You can even share those typographic masterpieces via sms, email, or the cloud; making this the perfect way to send a custom message to loved ones this holiday season.

Inspiration can strike at any time. Streamlining font creation. The 100 Greatest Free Fonts for 2014. New Free Fonts For Designers. 8 New Free Fonts for your Designs. Free Fonts Download, Fonts for Free. 10 Terrific Font Pairs for You To Try. Choosing fonts that pair well with each other is a lot like choosing an outfit. You have to make sure everything works well together. →Convertir un formato de fuente gratuitamente ttf otf fon pfb dfont afm. How to Use Adobe Edge Web Fonts on Your Site.

Adobe recently launched a free web font service to complement Typekit, their amazing premium service. Using @font-face. The @font-face rule allows custom fonts to be loaded on a webpage. Once added to a stylesheet, the rule instructs the browser to download the font from where it is hosted, then display it as specified in the CSS. Without the rule, our designs are limited to the fonts that are already loaded on a user's computer, which vary depending on the system being used. Optimizar fuentes web — Web Fundamentals. Which fonts work best for brands & logos? + how to pick the perfect one - Graphic Design Blender. Junicode. Ten Awesome Alternative Free Web Fonts. Free web fonts such Museo, League Gothic, Droid and Lobster have been around since the dawn of the @font-face revolution. Whilst these are all fantastic typefaces, they are beginning to suffer from over-use. Alternatives To Your Favorite Serif Typefaces [Updated With Specimens] The art of mixing Google typefaces made easy.