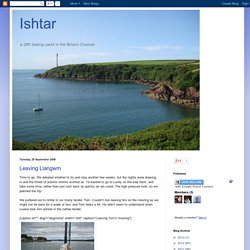 Left the mooring at Llangwm at 13:00 Thursday. Louise got some sleep as I sailed down to Dale. Got caught out at Milford and rounded up. Full sail had barely moved us in the Upper Cleddau, but it seemed to blow a gale for 5 minutes at Milford. The Port Authority weather broadcast explained: 'Winds East or NorthEast, 10 -15 knots occasionally 15-20 knots. There are some lovely vessels to be seen in the Haven. [caption id="" align="alignnone" width="300" caption="Sailing ship, Milford"] [/caption] We met up with yet more friends from Cardiff on Dale pontoon. [caption id="" align="alignnone" width="300" caption="Allan Fishing"] Louise joined in whilst I blew up the tender, and hooked a bass, first cast: [caption id="" align="alignnone" width="300" caption="Louise, with bass"] Not a keeper, too small. 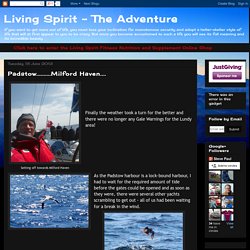 Finally the weather took a turn for the better and there were no longer any Gale Warnings for the Lundy area! As the Padstow harbour is a lock-bound harbour, I had to wait for the required amount of tide before the gates could be opened and as soon as they were, there were several other yachts scrambling to get out - all of us had been waiting for a break in the wind.

I was on my way by about 10.30AM. Milford Haven is just about due North from Padstow and as there is no coast line involved, this was more or less a straight line journey of about 70 miles. During this journey I only saw one other yacht and a fishing boat, but countless seabirds and I reckon well over 30 different dolphins came to join me, many of them swimming in front of the bow of Brown Eyes or alongside. Milford Haven to Padstow. We are away at last after waiting for a break in the weather, the last two weeks have felt like an eternity. 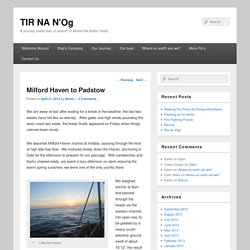 After gales and high winds pounding the west coast last week, the break finally appeared on Friday when things calmed down nicely. We departed Milford Haven marina at midday, passing through the lock at high tide free flow. Milford Haven to Penzance - Destaye around the UK. Milford Haven 51◦42.686N 005◦02.338W So a late return to the boat, I caught the 3:45pm from Paddington to Swansea and changed trains to Milford Haven. 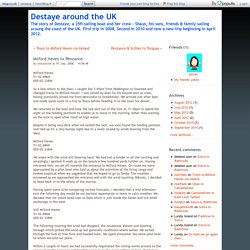 I was joined by Alan for his second stint as crew, having previously joined me from Newcastle to Stonehaven. 5: Scilly to Milford Haven. 4: Falmouth to Scilly. 5: Scilly to Milford Haven. Autonomy trip to Lundy - Pembroke Haven Yacht Club. Lovely sail down to Lundy – broad reach the whole way with 15 to 20 knots of wind, a bit splashy but consistent speeds of 7-8 knots meant we arrived a bit early really so it was a little lumpy round the North tip of the island. 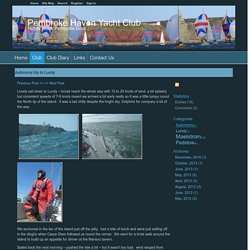 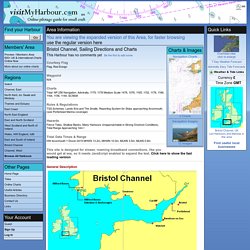 Saundersfoot Sailing Club. What to do on a fine sunny day?. 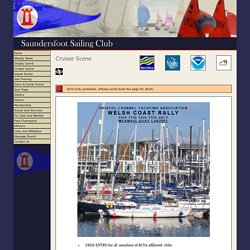 John Davis, who know every square inch of the waters around Saundersfoot has kindly contributed a cruising guide listing where to go and what to avoid. 1 .LYDSTEP (Charts 1076 or 1482) Depart any time after H.W to carry the tide down. Return in the evening with the tide. Distance 6M, a leisurely 1.5 hours each way. 2. Long day trip. 3. Long day trip- Best on Neaps as tide is against you both ways. TWO DAY or LONGER TRIPS. Dansa round Ireland. Bristol Channel. Mounts Bay-Milford Haven For rounding Lands End and clearing the Long Ships see passage Land's End to Pentire Pt. 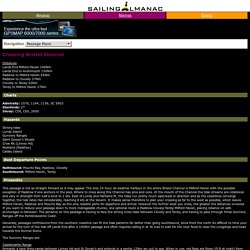 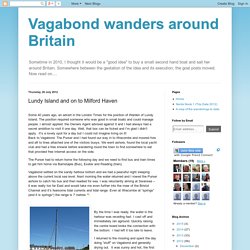 The position required someone who was good in small boats and could manage people. I almost applied: the Owners Agent advised against it and I had always had a secret ambition to visit it one day. Well, that box can be ticked and I’m glad I didn’t apply. It’s a lovely spot for a day but I could not imagine living on it! Cruise to Lundy. Lundy Island Summer 2011 Last Cruise in Dansa. 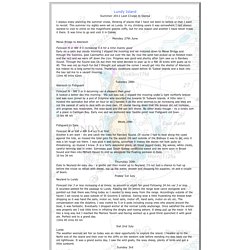