Missing treasure hunter's remains found in New Mexico. Image copyright Courtesy of Linda Bilyeu via AP The remains of a 54-year-old man who disappeared hunting for a hidden stash of gold and jewels in New Mexico have been discovered, local authorities say. 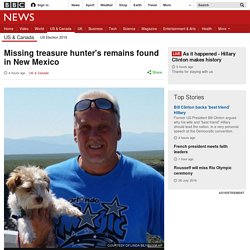 Police in New Mexico's capital Santa Fe confirmed the remains as those of Randy Bilyeu from Colorado. He went missing in January this year hunting for a $2m (£1.5m) trove hidden by art dealer and author Forrest Fenn. Thousands have searched for the hoard left by Mr Fenn, who gave clues about the treasure's location in a 2011 book. Bilyeu set out for the Rocky Mountains in northern New Mexico with a raft and his pet dog on 5 January. His wife reported him missing on 14 January, and the raft and dog were found the next day. Mr Fenn has urged people not to search for the treasure during winter and joined in search efforts to find Bilyeu. The writer says hunters should not look in "any place where an 80-year-old man couldn't put it". The Thrill Resource Page. This book is the remarkable true story of Forrest Fenn’s life and of a hidden treasure, secreted somewhere in the mountains north of Santa Fe. 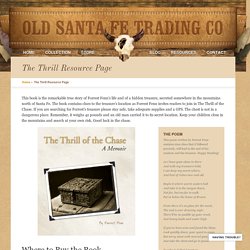 The book contains clues to the treasure’s location as Forrest Fenn invites readers to join in The Thrill of the Chase. If you are searching for Forrest’s treasure please stay safe, take adequate supplies and a GPS. The chest is not in a dangerous place. Remember, it weighs 42 pounds and an old man carried it to its secret location. Keep your children close in the mountains and search at your own risk. Where to Buy the Book Collected Works Bookstore Sold exclusively through Collected Works Bookstore located in Santa Fe, New Mexico. Has the Treasure Been Found? To our knowledge, NO! There is always a chance that someone has found it and hasn't made it public but as far as we know it's still out there. 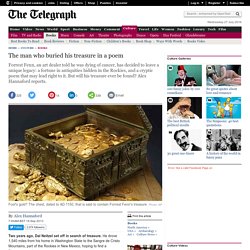 Before he set out, after poring through historical books and scouring maps, Neitzel, a 65-year-old former TV cameraman, convinced himself the treasure was in the Rio Grande Gorge in New Mexico, close to the border with Colorado. Remarkably, he’d managed to locate a large house on the edge of a steep drop that overlooked a gushing river. Outside that house was a sign that read: ‘Brown’.

He read Fenn’s poem aloud again: “Put in below the home of Brown.” That had to be it. The poem leading to Forrest Fenn's treasure But after days spent scouring the river bed and banks, he knew it wasn’t. “It must refer to something historical,” Neitzel says. Dal Neitzel isn’t sure how much time or money he’s already devoted to hunting for the treasure.

But, Neitzel says, “If I desperately needed the money, I wouldn’t be able to afford to go looking for it.” Missing treasure hunter's remains found in New Mexico. Well Over $1 Million in Buried Treasure: Find it! Photo Courtesy of Forrest Fenn What’s a mere $100,000 compared to a treasure trove well over $1 million? 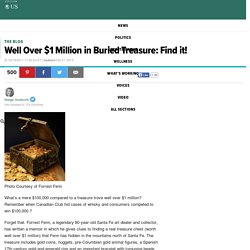 Remember when Canadian Club hid cases of whisky and consumers competed to win $100,000.? Forget that. Forrest Fenn, a legendary 80-year-old Santa Fe art dealer and collector, has written a memoir in which he gives clues to finding a real treasure chest (worth well over $1 million) that Fenn has hidden in the mountains north of Santa Fe. The treasure includes gold coins, nuggets, pre-Columbian gold animal figures, a Spanish 17th century gold-and-emerald ring and an important bracelet with turquoise beads excavated in 1898 from Mesa Verde, which Fenn won much later playing pool. “Lost treasure” books he read as a boy influenced Fenn, who has always loved mystery, intrigue and adventure.

The cancer remained in remission so Fenn, who said, “I just got tired of waiting,” decided to go ahead and bury the treasure somewhere in the mountains north of Santa Fe. Well Over $1 Million in Buried Treasure: Find it!