Bringing our World to You - One Scene at a Time. Edit fiddle. FileZilla - The free FTP solution. Antique Maps and Prints of Pembrokeshire. English Law and Irish Tenure - Frederick Waymouth Gibbs. Boundary Disputes - John Antell - Barrister. Introduction In one sense any dispute between adjoining landowners over land is a boundary dispute but the term is more usually applied where a strip only a few feet or yards wide is in dispute. 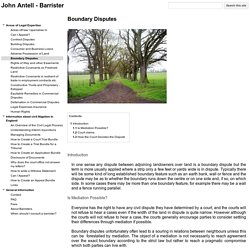 Typically there will be some kind of long established boundary feature such as an earth bank, wall or fence and the dispute may be as to whether the boundary runs down the centre or on one side and, if so, on which side. In some cases there may be more than one boundary feature, for example there may be a wall and a fence running parallel. Is Mediation Possible? Everyone has the right to have any civil dispute they have determined by a court, and the courts will not refuse to hear a cases even if the width of the land in dispute is quite narrow. Boundary disputes unfortunately often lead to a souring in relations between neighbours unless this can be forestalled by mediation. Mediation is not always successful. Court claims How the Court Decides the Dispute. Hedge and ditch rule for draining sewage effluent. What Is A Drainage Ditch? 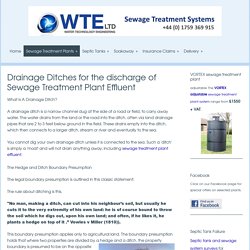 A drainage ditch is a narrow channel dug at the side of a road or field, to carry away water. The water drains from the land or the road into the ditch, often via land drainage pipes that are 2 to 3 feet below ground in the field. These drains empty into the ditch, which then connects to a larger ditch, stream or river and eventually to the sea. You cannot dig your own drainage ditch unless it is connected to the sea. Such a 'ditch' is simply a 'moat' and will not drain anything away, including sewage treatment plant effluent. The legal boundary presumption is outlined in this classic statement: The rule about ditching is this. FAQ - John Antell - Barrister. For a quotation for advice about a civil law matter, send an email to mail@johnantell.co.uk explaining the background and attaching relevant documents (including Claim Form, Particulars of Claim, Defence and any other statements of case or application notices if court proceedings are current, or the equivalent documents if there are tribunal proceedings). 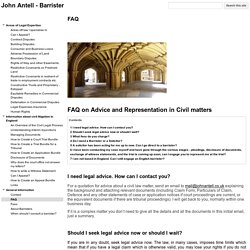 I will get back to you, normally within one business day. If it is a complex matter you don’t need to give all the details and all the documents in this initial email, just a summary. Should I seek legal advice now or should I wait? If you are in any doubt, seek legal advice now. Connop Thirlwall. Connop Thirlwall (11 January 1797 – 27 July 1875) was an English bishop (in Wales) and historian. 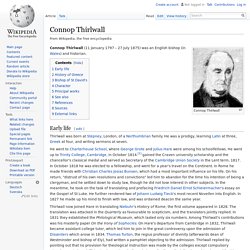 Early life[edit] Thirlwall was born at Stepney, London, of a Northumbrian family. He was a prodigy, learning Latin at three, Greek at four, and writing sermons at seven. He went to Charterhouse School, where George Grote and Julius Hare were among his schoolfellows. He went up to Trinity College, Cambridge, in October 1814.[1] gained the Craven university scholarship and the chancellor's classical medal and served as Secretary of the Cambridge Union Society in the Lent term, 1817. Thirlwall now joined Hare in translating Niebuhr's History of Rome; the first volume appeared in 1828. The event marked him out for promotion by a Liberal Government, and in the autumn he received from Lord Brougham as chancellor the living of Kirby Underdale in Yorkshire. History of Greece[edit] Bishop of St David's[edit] In 1840 Thirlwall was raised to the see of St David's.

Character[edit] Principal works[edit] The National Archives Labs » Blog Archive » Valuation Office map finder. Use this tool to identify and order Valuation Office Survey maps of England and Wales from 1910 to 1915. 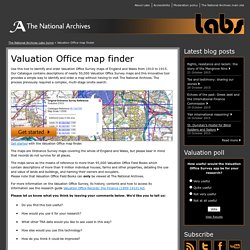 Our Catalogue contains descriptions of nearly 50,000 Valuation Office Survey maps and this innovative tool provides a simple way to identify and order a map without having to visit The National Archives. The process previously required a complex, multi-stage onsite search. Tithe maps. The term Tithe map is usually applied to a map of an English or Welsh parish or township, prepared following the Tithe Commutation Act 1836. 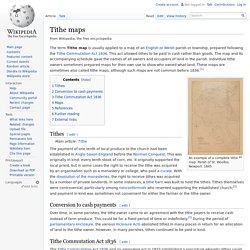 This act allowed tithes to be paid in cash rather than goods. The map and its accompanying schedule gave the names of all owners and occupiers of land in the parish. Individual tithe owners sometimes prepared maps for their own use to show who owned what land. These maps are sometimes also called tithe maps, although such maps are not common before 1836.[1] The Diary of John James, Renewydd, Llanwnda, Pembrokeshire for the year of 1846. Introduction Inputting the diary of a farmer, John James, Pencaer Abergwaun for the single year of 1846 was the project, with the original material being kindly provided by Hedydd Hughes. 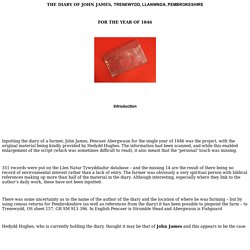 The information had been scanned, and while this enabled enlargement of the script (which was sometimes difficult to read), it also meant that the ‘personal’ touch was missing. Untitled. Untitled. Untitled. Pembrokeshire - sources for archival records Dyfed FHS. At some point during your family history research you may wish to contact the National Library of Wales There are various ways to make and keep contact. 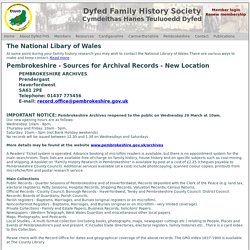 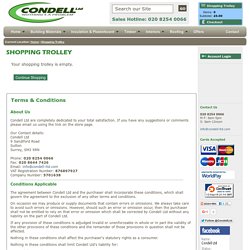 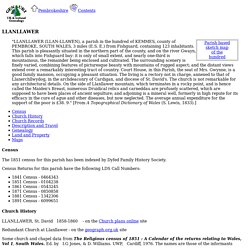