The pattern of disruption. Its regenerative and degenerative effects. Needed to dismantle monopolies and renew the system, abusive when used as a domination tool, systematized...

Uber will eventually replace all its drivers with self-driving cars. Bruce Sterling NEXT13 - Fantasy prototypes and real disruption. The Real Trouble with Disruption. Young wannabes doing their thing at a Techcrunch Disrupt conference in 2012. 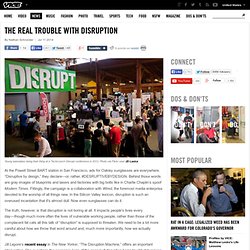 Photo via Flickr user JD Lasica At the Powell Street BART station in San Francisco, ads for Oakley sunglasses are everywhere. “Disruptive by design,” they declare—or, rather, #DESRUPTIVEBYDESIGN. Behind those words are gray images of blueprints and lasers and factories with big bolts like in Charlie Chaplin’s spoof Modern Times. Fittingly, the campaign is a collaboration with Wired, the foremost media enterprise devoted to the worship of all things new. The truth, however, is that disruption is not boring at all. Jill Lepore’s recent essay in The New Yorker, “The Disruption Machine,” offers an important intervention. A good way to start thinking about disruption is by asking questions like this: Who is being disrupted most? The most serious disruption of our economy in recent memory, the 2008 financial crash, is a particularly troubling example of this pattern.

Disruption is essential, and a fact of life. Love and Money: Harnessing Finance to Serve the Disruptive - and the World. Donna Morton explains how a stint with the Unreasonable Institute inspired a new paradigm for finance - one that meets the needs of all social entrepreneurs “Another world is not only possible, she is on her way. 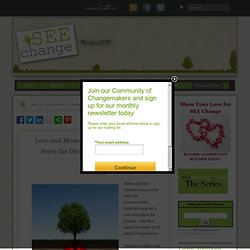 On a quiet day, I can hear her breathing.” ― Arundhati Roy Business and economics are powerful forces in the world, but even they both bow to finance. Finance is shockingly powerful, a fast moving global force that can either harm or be harnessed to heal the world. If we are going to stop climate change, end extreme poverty, create more meaning work, honour Indigenous wisdom and create ways for women’s leadership to emerge we need to make finance serve life, culture and dignity. After decades as an activist and social entrepreneur it hit me that the economy is not the root system - the economy feeds at the feet of finance. The shift was catalyzed by the Unreasonable Institute. Finance was new to many of us.

Jill Lepore: What the Theory of “Disruptive Innovation” Gets Wrong. In the last years of the nineteen-eighties, I worked not at startups but at what might be called finish-downs. 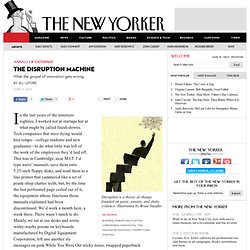 Tech companies that were dying would hire temps—college students and new graduates—to do what little was left of the work of the employees they’d laid off. This was in Cambridge, near M.I.T. I’d type users’ manuals, save them onto 5.25-inch floppy disks, and send them to a line printer that yammered like a set of prank-shop chatter teeth, but, by the time the last perforated page coiled out of it, the equipment whose functions those manuals explained had been discontinued. We’d work a month here, a week there. There wasn’t much to do. Not long after that, I got a better assignment: answering the phone for Michael Porter, a professor at the Harvard Business School. Porter was interested in how companies succeed. Ever since “The Innovator’s Dilemma,” everyone is either disrupting or being disrupted. Most big ideas have loud critics. Are New Funding Methods Disrupting Venture Capital? » Digital Innovation and Transformation.

With the increased amount of various funding methods for startups, the landscape has become ever more siloed per financing round stage and size. 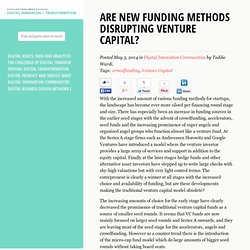 There has especially been an increase in funding sources in the earlier seed stages with the advent of crowdfunding, accelerators, seed funds and the increasing prominence of super angels and organized angel groups who function almost like a venture fund. At the Series A stage firms such as Andreessen Horowitz and Google Ventures have introduced a model where the venture investor provides a large array of services and support in addition to the equity capital. Finally at the later stages hedge funds and other alternative asset investors have stepped up to write large checks with sky-high valuations but with very light control terms. The entrepreneur is clearly a winner at all stages with the increased choice and availability of funding, but are these developments making the traditional venture capital model obsolete?