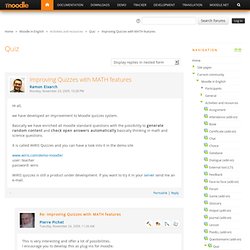 For example tells that "WIRIS is a free access at several European educational portals. Those versions are sponsored by the corresponding Ministry of Education and are free to use for teachers and students. " On the other hand gives license prices starting from 80 euros (1 user in local computer) to non defined +info prices. I suppose that Finland is one of those countries / Ministries of Education that have both supported your work in Wiris and Math For More (by projects of European Commision) but I have not seen any documents about these European educational portals - do you mean for example these universities mentioned in ? Or some savings coupons for us ordinary open source moodlers/testers who are not taking part in EU projects... DragMath equation editor. WARNING: As of Moodle 2.x DragMath is now in Moodle core (you need not install the code if you are running Moodle 2.x.) 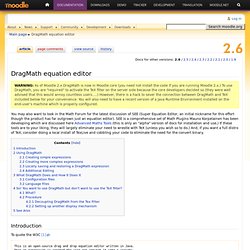 To use DragMath, you are "required" to activate the TeX filter on the server side because the core developers decided so (they were well advised that this would annoy countless users.....) However, there is a hack to sever the connection between DragMath and TeX included below for your convenience. You will also need to have a recent version of a Java Runtime Environment installed on the end-user's machine which is properly configured. You may also want to look in the Math Forum for the latest discussion of SEE (Super Equation Editor, an initial nickname for this effort though the product has far outgrown just an equation editor).

SEE is a comprehensive set of Math Plugins Mauno Korpelainen has been developing which are discussed here Advanced Maths Tools (this is only an "alpha" version of docs for installation and use.) Introduction To quote the W3C [1]: Using DragMath. Math notation issues. Marc, it's not actually missing support for long or polynomial division - in your example code \def is in the list of blacklisted tex tags - see function tex_sanitize_formula($texexp) in filter/tex/lib.php and $tex_blacklist = array( 'include','command','loop','repeat','open','toks','output', 'input','catcode','name','^^', '\def','\edef','\gdef','\xdef', '\every','\errhelp','\errorstopmode','\scrollmode','\nonstopmode', '\batchmode','\read','\write','csname','\newhelp','\uppercase', '\lowercase','\relax','\aftergroup', '\afterassignment','\expandafter','\noexpand','\special', '\let', '\futurelet','\else','\fi','\chardef','\makeatletter','\afterground', '\noexpand','\line','\mathcode','\item','\section','\mbox','\declarerobustcommand' ); This is necessary here for security reasons... not meaning that all of these TeX tags are vulnerable but allowing free use of them may cause some "unexpected issues". 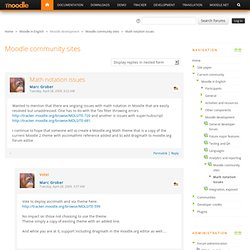 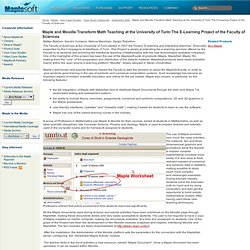 This Project is aimed at extending the e-learning services offered by the Faculty to its students and enriching the traditional teaching of Mathematics with the new technologies available nowadays. One of the highlights of this project has been the use of the Maplesoft suite of products (Maple, MapleNet, Maple TA), making them the “core” of the preparation and distribution of the didactic material.

Maplesoft products were made available mainly within the open source e-learning platform “Moodle”, widely adopted in Italian Universities. Maple’s well known and popular features helped the Faculty to take the decision to adopt the MapleSoft suite, in order to give students good training in the use of symbolic and numerical computation systems. Mathematics. Until there is time to integrate in to the rest of this page, the time has come to note that development of SEE (Super Equation Editor, a nickname for a set of plugins being developed by Mauno that now far outstrips the notion of a "plain old equation editor") that Colin has created a page to address those tools at Advanced_Maths_Tools (yes, Maths has an "s" which makes the page arguably undiscoverable by people in the US, but Americans don't speak English anyway.) 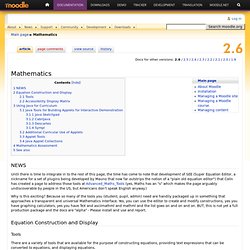 Why is this exciting? Because so many of the tools you (student, pupil, admin) need are handily packaged up in something that approaches a transparent and universal Mathematics interface. Yes, you can use the editor to create and modify constructions, yes you have graphing calculators, yes you have TeX and asciimathml and mathml and the list goes on and on and on. BUT, this is not yet a full production package and the docs are "alpha" - Please install and use and report. Equation Construction and Display Tools fn1. Math Moodle. MATH 1710 - Statistical Theory and Application in the Real World Spring 2013. 4 credits. 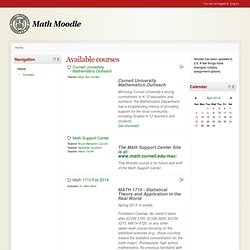 Forbidden Overlap: No credit if taken after ECON 3190, ECON 3200, ECON 3210, MATH 4720, or any other upper-level course focusing on the statistical sciences (e.g., those counting toward the statistics concentration for the math major). Prerequisite: high school mathematics. No previous familiarity with computers presumed. Introductory statistics course discussing techniques for analyzing data occurring in the real world and the mathematical and philosophical justification for these techniques.