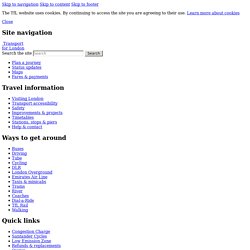 Getting to see what London has to offer is easy, especially if you walk: There's lots to explore and some great walks connecting them. So, whether it's a place to feed the ducks, a stroll during lunch hour or an energetic Sunday walk you're after, our quality walking routes have something for everyone. Each walking section provides handy information for planning your walk, a route overview and directions. Capital Ring A walk through London's greenest suburbs, this 78-mile route is divided into 15 shorter walks, including Richmond Park, Wimbledon Common and Eltham Palace. Green Chain A network of straight and circular walks across South East London, the route takes in dozens of woods and parks, as well as the Thames Barrier and Crystal Palace. Lea Valley A glimpse into Britain's industrial past, the path follows the 18 miles along the Lee Navigation towpath, from Waltham Abbey to the Thames at Limehouse Basin.

Paradise With an Asterisk. Outside looks at present-day Bikini Atoll, and the lives of the 34 native Bikinians who used to call it home. Despite the natural beauty, it is impossible to walk anywhere, or look anywhere, and escape Bikini’s nightmare history. Every man-made object on the island is an artifact either of the bomb tests or of some failed attempt to help the Bikinians return to their home. There are old bunkers built to shield cameras from atomic explosions; buildings put up by the U.S.

I would SO pay $500 a night to stay at the Giraffe Manor in Nairobi, Kenya. Once again, I have gone on virtual vacation via Airbnb and have come back with an amazing find. 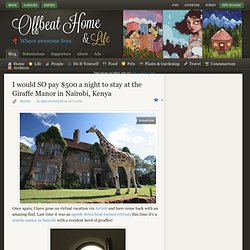 Last time it was an upside down boat-turned-retreat, this time it's a stately manor in Nairobi with a resident herd of giraffes! Giraffes that will also drop in for a visit. OR even more incredibly, dine with you! I mean, COME ON with that cuteness! See that little girl on the left behind the teapot? From the listing: Travelers from all over the world now make The Giraffe Manor part of their East African safari, the only place in the world where you can enjoy the breathtaking experience of feeding and photographing the giraffe over the breakfast table and at the front door. Because the rooms are just as impressive as the tall lanky animal friends! Check out the sitting room with a fireplace big enough to walk into. 10 Things About Denmark that Shock First-time Visitors. The Danes are popularly known as the laid-back Viking descendants and the world’s happiest people. 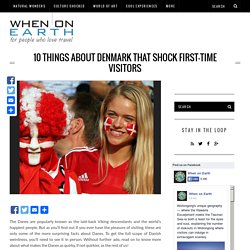 But as you’ll find out if you ever have the pleasure of visiting, these are only some of the more surprising facts about Danes. To get the full scope of Danish weirdness, you’ll need to see it in person. Without further ado, read on to know more about what makes the Danes as quirky, if not quirkier, as the rest of us! 1. Following the Rules. Travel Tips for Introverts. 18 Natural Swimming Pools Adventurous Travelers Will Love. Wanna swim? 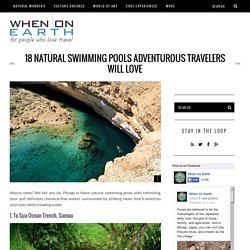 We bet you do. Plunge in these natural swimming pools with refreshing, clear and definitely chemical-free waters surrounded by striking views that’ll entertain your eyes while treading water. 1. To Sua Ocean Trench, Samoa A deep hole storing seawater 30 meters in depth stays hidden in Lotofaga, a village in the Samoan island of Upolu. 2. The sacred peninsula of the Mayans called Yucatan has been blessed with several water-filled sinkholes and Cenote Ik Kil is one of the most popular. 3.

A long time ago a large cave collapsed into Hamilton Creek and bam – a natural green pool appeared. 4. Not only can you swim in the shimmering blue waters of Dudu Blue Lagoon, but you can also dive in to explore the three tunnels connected to the depths of the lagoon. 5. Located in Thassos Island, Giola is a whole new kind of splash compared to the wonderful beaches that surround Thassos Island. 10 of the Most Beautiful Waterfalls in Iceland. Your visit in Iceland won’t be complete without taking snapshots of its amazing waterfalls. 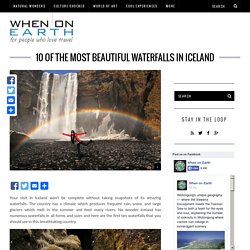 The country has a climate which produces frequent rain, snow, and large glaciers which melt in the summer and feed many rivers. No wonder Iceland has numerous waterfalls in all forms and sizes and here are the first ten waterfalls that you should see in this breathtaking country. 1. Kirkjufellsfoss Kirkjufellsfoss is a 5-meter high waterfall that channels the glacier melt water of the Snæfellsjökull. 2. This series of waterfalls located in Husafell in the west county of Iceland flows out a distance of about 900 metres out of the Hallmundarhraunof, a craggy lava field that formed when a volcano erupted under a glacier. 3.

Situated along the road 355 of Iceland, Bruarfoss is a small waterfall that is known for its blue waters. 4. Known as “Black Fall”, Svartifoss is one of the popular sights in Skaftafell National Park. Love Hotels by Ryan Estrada. How to Move to Mexico.