V4I4 0416. Aodv python. Open-Source Routing and Network Simulation. To emulate the operation of IP networks, the CORE Network Emulator requires that routing and networking software be installed on the host Linux system. 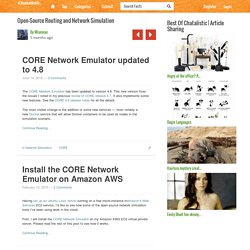 CORE creates virtual nodes using the Linux Containers (LXC) network namespaces feature so all services installed in the host computer will be available to run on the virtual nodes created by CORE. The CORE Network Emulator documentation does not provide information about these services and does not show how to install them. This post describes the open-source networking software and utilities and how to install each one in a Linux system.

Quagga The Quagga open-source router software is used by the Router node in the CORE Network Emulator to support dynamic routing protocols. Quagga is the most commonly used open-source routing daemon. To install Quagga, enter the following command: $ sudo apt-get install quagga We do not need to configure Quagga on the host. NS-3, setup network simulator 3 tutorial - Jetsways. In this tutorial, we will go through how to install NS-3 on ubuntu step by step. 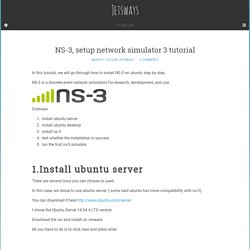 NS-3 is a discrete event network simulators for research, development, and use. Overview install ubuntu serverinstall ubuntu desktopinstall ns-3test whether the installation is successrun the first ns-3 simulate There are several linux you can choose to used. In this case, we chose to use ubuntu server. ( some said ubuntu has more compatibility with ns-3) You can download it here I chose the Ubuntu Server 14.04.4 LTS version. Download the iso and install on vmware. 4G Network Emulator. Mobility Management Entity (MME) emulation SAE Bearer Management UE Location Subscriber Data Handling Authentication Fault Recovery Notification Mix of PDN types, IPv4, IPv6 Up to 2 sessions per IMSI. 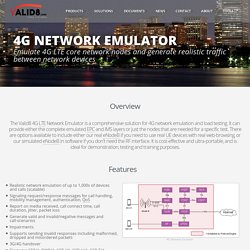 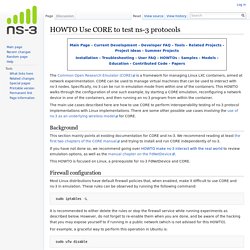 CORE can be used to manage virtual machines that can be used to interact with ns-3 nodes. Specifically, ns-3 can be run in emulation mode from within one of the containers. This HOWTO walks through the configuration of one such example, by starting a CORE emulation, reconfiguring a network device in one of the containers, and then running an ns-3 program from within the container. The main use cases described here are how to use CORE to perform interoperability testing of ns-3 protocol implementations with Linux implementations.

There are some other possible use cases involving the use of ns-3 as an underlying wireless model for CORE. Background. The cnet network simulator (v3.3.3) The cnet network simulator (v3.3.3) cnet enables development of and experimentation with a variety of data-link layer, network layer, and transport layer networking protocols in networks consisting of any combination of wide-area-networking (WAN), local-area-networking (LAN), or wireless-local-area-networking (WLAN) links. cnet runs on Linux and Apple's Mac OS-X (10.4 to 10.10). cnet does not run on Windows. 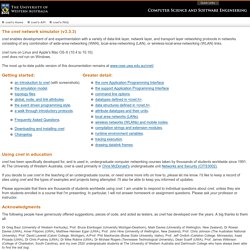 The most up-to-date public version of this documentation remains at www.csse.uwa.edu.au/cnet/. Using cnet in education cnet has been specifically developed for, and is used in, undergraduate computer networking courses taken by thousands of students worldwide since 1991. If you decide to use cnet in the teaching of an undergraduate course, or need some more info on how to, please let me know. Please appreciate that there are thousands of students worldwide using cnet. Acknowledgments Dr Greg Baur (University of Western Kentucky), Prof. Ns-3 vns-3.14 documentation. Building a Bus Network Topology In this section we are going to expand our mastery of ns-3 network devices and channels to cover an example of a bus network. ns-3 provides a net device and channel we call CSMA (Carrier Sense Multiple Access). 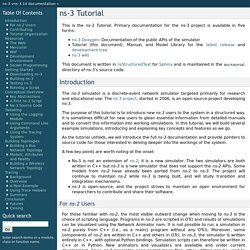 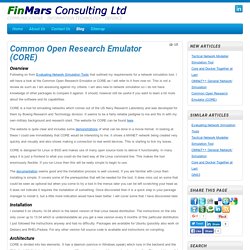 I will have a look at the Common Open Research Emulator or CORE as I will refer to it from now on. This is not a review as such as I am assessing against my criteria. I am also new to network simulation so I do not have knowledge of other packages to compare it against. It should, however still be useful if you want to learn a bit more about the software and its capabilities. CORE is a tool for emulating networks which comes out of the US Navy Research Laboratory and was developed for them by Boeing Research and Technology division.

The website is quite clear and includes some demonstrations of what can be done in a movie format. CORE is designed for Linux or BSD and makes use of many open source tools to deliver it functionality. The documentation seems good and the installation process is well covered. Installation. Networks and Communication Systems Branch. The Common Open Research Emulator (CORE) is a tool for emulating networks on one or more machines. 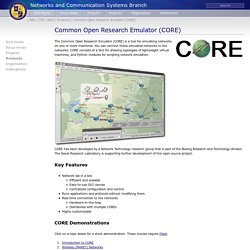 You can connect these emulated networks to live networks. CORE consists of a GUI for drawing topologies of lightweight virtual machines, and Python modules for scripting network emulation. CORE has been developed by a Network Technology research group that is part of the Boeing Research and Technology division. The Naval Research Laboratory is supporting further development of this open source project. Key Features Network lab in a box Efficient and scalable Easy-to-use GUI canvas Centralized configuration and control Runs applications and protocols without modifying them Real-time connection to live networks Hardware-in-the-loop Distributed with multiple COREs Highly customizable CORE Demonstrations Click on a topic below for a short demonstration. 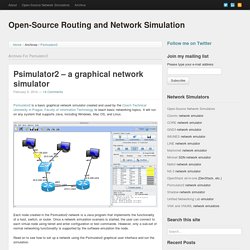 It will run on any system that supports Java, including Windows, Mac OS, and Linux. Each node created in the Psimulator2 network is a Java program that implements the functionality of a host, switch, or router. Once a network simulation scenario is started, the user can connect to each virtual node using telnet and enter configuration or test commands. However, only a sub-set of normal networking functionality is supported by the software emulation the node. Read on to see how to set up a network using the Psimulator2 graphical user interface and run the simulation. Continue Reading…