Get Worst Year To Be Alive. I came across various social media posts and memes, making the fun of the year 2020. 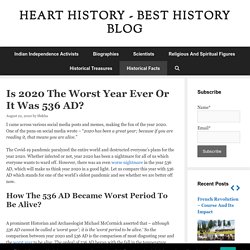 One of the puns on social media wrote – “2020 has been a great year; because if you are reading it, that means you are alive.” The Covid-19 pandemic paralyzed the entire world and destructed everyone’s plans for the year 2020. Whether infected or not, year 2020 has been a nightmare for all of us which everyone wants to ward off. However, there was an even worse nightmare in the year 536 AD, which will make us think year 2020 in a good light. Let us compare this year with 536 AD which stands for one of the world’s oldest pandemic and see whether we are better off now.

Important Events In Indian History. History of India - Origin, Events, and Politics. India, officially the Republic of India, is a nation of very ancient history and tradition. 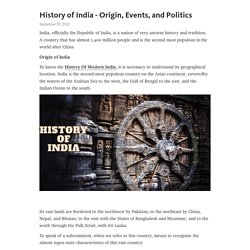 A country that has almost 1,400 million people and is the second most populous in the world after China Origin of India To know the History Of Modern India, it is necessary to understand its geographical location. India is the second-most populous country on the Asian continent, coveredby the waters of the Arabian Sea to the west, the Gulf of Bengal to the east, and the Indian Ocean to the south. Its vast lands are bordered to the northwest by Pakistan, to the northeast by China, Nepal, and Bhutan; to the east with the States of Bangladesh and Myanmar; and to the south through the Palk Strait, with Sri Lanka.

To speak of a subcontinent, when we refer to this country, means to recognize the almost supra-state characteristics of this vast country. Continent: Asia.Surface: 3,287,263 km².Capital: New Delhi.Population: 1,387,610,328 inhabitants.Currency: Indian rupee.Official languages: Hindi and English. The History Of India. The history of India is full of interesting facts. 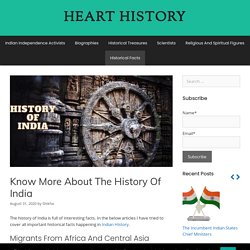 In the below articles I have tried to cover all important historical facts happening in Indian History. Migrants From Africa And Central Asia Around 70,000 years ago humans left Africa for the first time and arrived in India via the great coastal migration. Their direct descendants can be found in the Andaman Islands even today. The next people to populate India were a small group so successful that their numbers quickly multiplied and soon swamped all traces of the previous coastal migration. Bronze Age Civilization Today’s Indians are the descendants of this prehistoric intermingling.

Most of the people were craftsmen and merchants whose trade network stretched to Sumer in today’s Iraq. Emerging Of New Society Eventually, Civilization went into decline perhaps because of climate change. History Of Modern India - Heart History. Know about History Of Independence Day. On August 15, 2020, India is going to celebrate Independence Day. 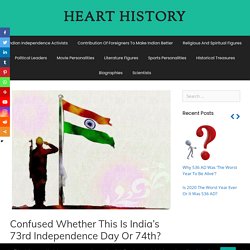 These days’ people are occupied with their personal goals and are busy in their life. 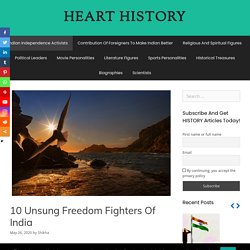 The difficulties they face, they call them miseries. Have you ever wondered that some souls have endured worse? Selflessly they have contributed their lives for the betterment of our country so that common man can live fearlessly. Their only aim was to see India free. There are many freedom fighters which you can count on your fingertips, but that’s not it. Struggle for making India Independent was a lengthy crushing battle that was started way back in 1757 with a goal of “Purna Swaraj”, and the same was supported not only by the freedom fighters, but there were many heroes who contributed much but did not fall in the limelight.

So in this post I am going to discuss 10 unsung Freedom Fighters of India. Matangini Hazra Matangini Hazra was a contributor in the “Non-Cooperation Movement” and “Quit India Movement”. Velu Nachiyar You, might be thinking why her? Veerapandia Kottabomman. History Of Independence Day.