The low carbon dioxide production of hypothyroidism (e.g., Lee and Levine, 1999), and the respiratory alkalosis of estrogen excess, are often overlooked. An adequate supply of calcium, and sometimes supplementation of salt and baking soda, can increase the tissue content of CO2.

Moderate methionine restriction (for example, using gelatin regularly in the diet) might be practical, but if increased carbon dioxide can activate the demethylase enzymes in a controlled way, it might be a useful treatment for the degenerative diseases and for aging itself.

Cataracts, cancer, congestive heart failure, seemingly such different degenerative problems, have the same sort of metabolic problem, leading to the abnormal absorption of water by cells, disrupting their normal functions. The same simple metabolic therapies, such as thyroid, progesterone, magnesium, and carbon dioxide, are appropriate 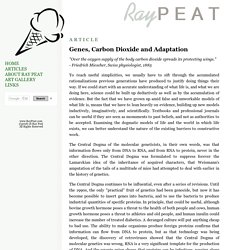 " - Friedrich Miescher, Swiss physiologist, 1885 To reach useful simplicities, we usually have to sift through the accumulated rationalizations previous generations have produced to justify doing things their way. If we could start with an accurate understanding of what life is, and what we are doing here, science could be built up deductively as well as by the accumulation of evidence. But the fact that we have grown up amid false and unworkable models of what life is, means that we have to lean heavily on evidence, building up new models inductively, imaginatively, and scientifically.

Textbooks and professional journals can be useful if they are seen as monuments to past beliefs, and not as authorities to be accepted. The Central Dogma continues to be influential, even after a series of revisions. O. Y. "Catatonia. Vojnosanit Pregl 1996 Jul-Aug;53(4):261-74. ^^^ Top ^^^ Protective CO2 and aging. Protective CO2 and aging The therapeutic effects of increasing carbon dioxide are being more widely recognized in recent years. 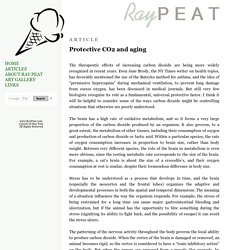 Even Jane Brody, the NY Times writer on health topics, has favorably mentioned the use of the Buteyko method for asthma, and the idea of “permissive hypercapnia” during mechanical ventilation, to prevent lung damage from excess oxygen, has been discussed in medical journals. But still very few biologists recognize its role as a fundamental, universal protective factor.

I think it will be helpful to consider some of the ways carbon dioxide might be controlling situations that otherwise are poorly understood. The brain has a high rate of oxidative metabolism, and so it forms a very large proportion of the carbon dioxide produced by an organism. Stress has to be understood as a process that develops in time, and the brain (especially the neocortex and the frontal lobes) organizes the adaptive and developmental processes in both the spatial and temporal dimensions. Lactate vs. CO2 in wounds, sickness, and aging; the other approach to cancer. Lactate vs. 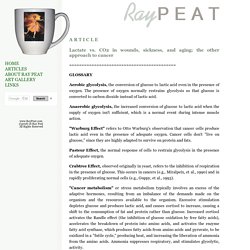 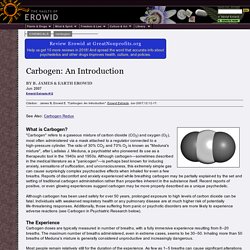 James & Earth Erowid Jun 2007 Citation: James B, Erowid E. "Carbogen: An Introduction". What is Carbogen? "Carbogen" refers to a gaseous mixture of carbon dioxide (CO2) and oxygen (O2), most often administered via a mask attached to a regulator connected to a high-pressure cylinder. Although carbogen has been used safely for over 50 years, prolonged exposure to high levels of carbon dioxide can be fatal. The Experience. 2008-09-15 Buteyko Breathing - Bud Weiss + Ray Peat. Ray Peat on bag breathing, CO2, lactic acid, cancer and living at altitude.

Ray Peat KMUD 7-16-10 Altitude and Co2 Full Interview. Capnography as a tool to detect metabolic changes in patients cared for in the emergency setting.