Visualizing American economics and economic history. Crossposted from Dissent The verdict in the Trayvon Martin case brought with it another volley of criticism of the American Legislative Exchange Council (ALEC), the right’s now not-so-secret legislative workshop. 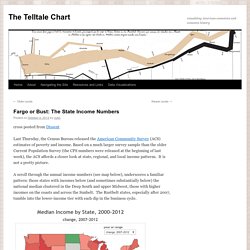 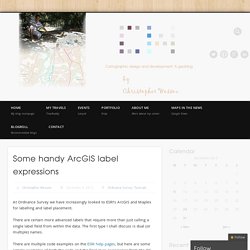 There are certain more advanced labels that require more than just calling a single label field from within the data. The first type I shall discuss is dual (or multiple) names. Considerations when exporting a model to a Python script. Since the release of ArcGIS 9, you have been able to export models created in ModelBuilder to a Python script. 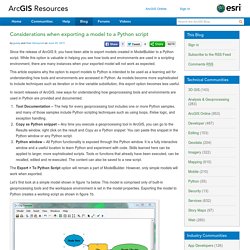 While this option is valuable in helping you see how tools and environments are used in a scripting environment, there are many instances when your exported model will not work as expected. This article explains why the option to export models to Python is intended to be used as a learning aid for understanding how tools and environments are accessed in Python. As models become more sophisticated to include techniques such as iteration or in-line variable substitution, this export option becomes less useful. In recent releases of ArcGIS, new ways for understanding how geoprocessing tools and environments are used in Python are provided and documented. PythonTemplate. I write a lot of Python code, both for stand-alone scripts and script tools. 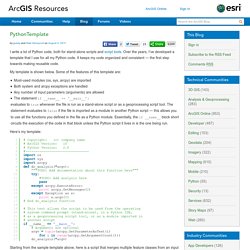 Over the years, I’ve developed a template that I use for all my Python code. It keeps my code organized and consistent — the first step towards making reusable code. My template is shown below. Some of the features of this template are: Most-used modules (os, sys, arcpy) are importedBoth system and arcpy exceptions are handledAny number of input parameters (arguments) are allowedThe statement if __name__ == ‘__main__’: evaluates to true whenever the file is run as a stand-alone script or as a geoprocessing script tool.

Here’s my template: Starting from the sample template above, here is a script that merges multiple feature classes from an input workspace using geoprocessing tools. Several Python IDEs give you an option to specify a template to use anytime you create a new .py file. PyScripter Wingware’s Python IDE. PEP 8 - Style Guide for Python Code. This document gives coding conventions for the Python code comprising the standard library in the main Python distribution. Please see the companion informational PEP describing style guidelines for the C code in the C implementation of Python [1]. This document and PEP 257 (Docstring Conventions) were adapted from Guido's original Python Style Guide essay, with some additions from Barry's style guide [2].

This style guide evolves over time as additional conventions are identified and past conventions are rendered obsolete by changes in the language itself. Many projects have their own coding style guidelines. In the event of any conflicts, such project-specific guides take precedence for that project. One of Guido's key insights is that code is read much more often than it is written. A style guide is about consistency. However, know when to be inconsistent -- sometimes style guide recommendations just aren't applicable. Ian Broad – Thinking Spatially. Small Town GIS: X Ray for ArcCatalog - How Does That "Use Spatial Reference" Option Work? In my quest to implement the Local Government Information Model, I have struggled with the X Ray for AcrCatalog add-in. 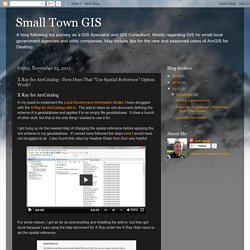 The add-in takes an xml document defining the schema of a geodatabase and applies it to an empty file geodatabase. It does a bunch of other stuff, but that is the only thing I wanted to use it for. I got hung up on the needed step of changing the spatial reference before applying the xml schema to my geodatabase. If I would have followed the steps here I would have not struggled at all. I also found this video by Heather Eisan from Esri very helpful: Calling os.startfile and webbrowser.open from ArcGIS. Recently I’ve created Python add-ins for data entry for our staff. 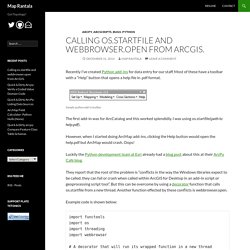 Most of these have a toolbar with a “Help” button that opens a help file in .pdf format. The first add-in was for ArcCatalog and this worked splendidly. Nerd tips for things you probably won't use. Get all your ArcGIS Python Recipes here! Samuel Bosch. Edgar F. Codd. Edgar Frank "Ted" Codd (19 August 1923 – 18 April 2003) was an English computer scientist who, while working for IBM, invented the relational model for database management, the theoretical basis for relational databases. 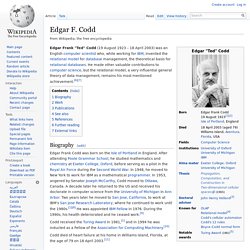 He made other valuable contributions to computer science, but the relational model, a very influential general theory of data management, remains his most mentioned achievement.[6][7] Biography[edit] Edgar Frank Codd was born on the Isle of Portland in England. After attending Poole Grammar School, he studied mathematics and chemistry at Exeter College, Oxford, before serving as a pilot in the Royal Air Force during the Second World War.

In 1948, he moved to New York to work for IBM as a mathematical programmer. GIS Forum/Blog Feed (@GIS_Feed) Between the Poles. Directions Magazine - GIS News and Geospatial. Stack Exchange GIS Blog. Geospatial Technology, Web Mapping and Spatial Services. Open Source GIS Blog. Welcome to GISCafe.com blogs main page. Please note that contributed articles, blog entries, and comments posted on GIScafe.com are the views and opinion of the author and do not necessarily represent the views and opinions of the management and staff of Internet Business Systems and its subsidiary web-sites. 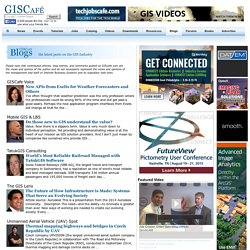 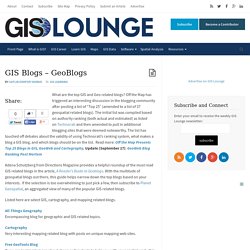 Off the Map has triggered an interesting discussion in the blogging community after posting a list of “Top 25″ (amended to a list of 37 geospatial related blogs). The initial list was compiled based on authority ranking (both actual and estimated) as listed on Technorati and then amended to pull in additional blogging sites that were deemed noteworthy. The list has touched off debates about the validity of using Technorati’s ranking system, what makes a blog a GIS blog, and which blogs should be on the list. Read more: Off the Map Presents Top 25 Blogs in GIS, GeoWeb and Cartography.