Portal Apex-Brasil. FDI is, on a broader sense, the international movement of capital for specific investment purposes, when overseas companies or individuals set up or purchase operations in another country. 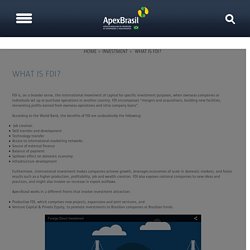 So how did Victoria Beckham turn a few dresses into a £34 million fashion business?    Fashion Industry in Brazil. The Brazilian fashion industry has begun to gain ground abroad and the forecast for the sector is that it will increase both inside the country and internationally - once people work hard for it. 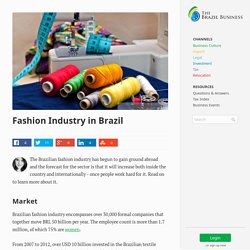 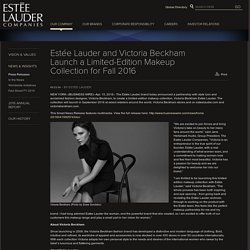 The collection will launch in September 2016 at select retailers around the world, Victoria Beckham stores and on esteelauder.com and victoriabeckham.com. This Smart News Release features multimedia. View the full release here: Victoria Beckham nominated for Womenswear Designer of the Year at British Fashion Awards. Explicit cookie consent. The long process to choose America’s presidential candidates got under way, in Iowa. 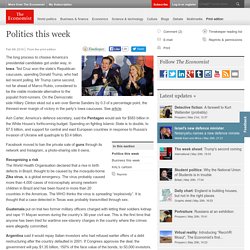 Ted Cruz won the state’s Republican caucuses, upending Donald Trump, who had led recent polling. Mr Trump came second, not far ahead of Marco Rubio, considered to be the viable moderate alternative to the populist front-runners. Brazil - Country Profiles, Key Facts & Original Articles. Long known for the natural wonders of the Amazon rainforest and a vibrant culture that prizes living in the moment, Brazil has emerged as a powerful economic force in Latin America and the world economy befitting its status as one of the four original BRIC countries. 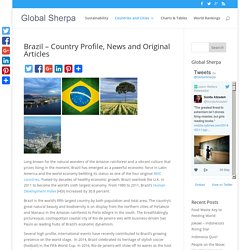 Fueled by decades of healthy economic growth, Brazil overtook the U.K. in 2011 to become the world’s sixth largest economy. From 1980 to 2011, Brazil’s Human Development Index (HDI) increased by 30.8 percent. Brazil is the world’s fifth largest country by both population and total area. Alesha Dixon: ‘Victoria Beckham is not my fashion rival’ TREND SETTER: Alesha says Posh has inspired her The gorgeous singer has just launched her first fashion range – called Little Black Dress. 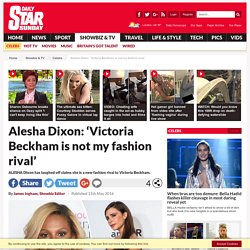 It has led to suggestions she is after Victoria’s fashion crown. Former Spice Girl Vic has become one of the world’s top designers since swapping the pop stage for the catwalk. Rio 2016 Olympics: Australian athletes to be given anti-Zika virus condoms as 'a common sense approach' Australian athletes at the Olympics in Rio de Janeiro will be supplied with condoms which manufacturers say will offer "near complete" antiviral protection against the Zika virus. 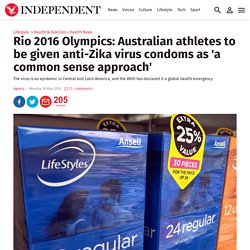 The Australian Olympic Committee announced the health measure for the Aug. 5-21 Olympics in a statement Monday, with the team's chef de mission Kitty Chiller saying distribution of the condoms was "a common sense approach to a very serious problem we are facing in Rio. " The mosquito-borne Zika virus is an epidemic in Central and Latin America, and the World Health Organization has declared it a global health emergency. Victoria Beckham X Estee Lauder Make-Up Collaboration. Menu View main navigation Articles View all Beauty gallery. 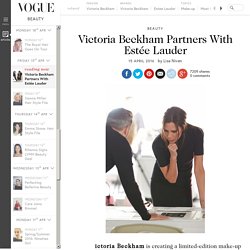 Victoria Beckham nominated for Womenswear Designer of the Year at British Fashion Awards. Zika virus-microcephaly connection hunted in Brazil. Then, last Thursday, at a hospital in Brazil, she saw three babies with the devastating defect all in one waiting room. 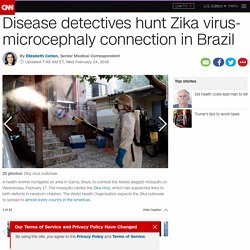 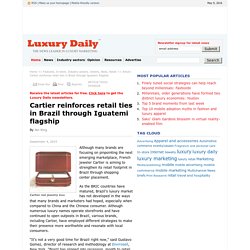 As the BRIC countries have matured, Brazil’s luxury market has not developed in the ways that many brands and marketers had hoped, especially when compared to China and the Chinese consumer. Although numerous luxury names operate storefronts and have continued to open outposts in Brazil, various brands, including Cartier, have employed different strategies to make their presence more worthwhile and resonate with local consumers. “It’s not a very good time for Brazil right now,” said Gustavo Gomez, director of research and methodology at Envirosell, New York.

“Brazil has slipped into recession, month to retail sales have slipped for many consecutive months and even ecommerce is seeing shrinking rates. Mr. Brazil profile - Overview. Brazil is South America's most influential country, a rising economic power and one of the world's biggest democracies. Over the past few years it has made major strides in its efforts to raise millions out of poverty, although the gap between rich and poor remains wide.

The exploitation of the Amazon rainforest, much of which is in Brazil, has been a major international worry, since the wilderness is a vital regulator of the climate. A former Portuguese colony, Brazil has a highly diverse population, including indigenous Americans and the descendants of African slaves and European settlers. Population 198.3 million Area 8.55m sq km (3.3m sq miles) Major language Portuguese Major religion Christianity Life expectancy 71 years (men), 77 years (women) Currency real. 'My customers want quality and luxury' - Victoria Beckham. The former singer and celebrated fashion designer opened a store in Printemps in Paris on Friday. Victoria warned that it will be impossible to keep her off the sales floor as she always feels like she has to be fully involved in her ventures.

Overall retail sales are expected to climb as a result of the sporting events, driven by influxes of wealthy tourists and an increase in domestic spending. There are many reasons for luxury executives to feel optimistic about the local luxury market. Despite a slowing economy and high inflation, the long-term prospects remain positive. Euromonitor International forecasts that the country will become the world’s fifth largest consumer market in 2023, with total consumer expenditure reaching US$2.7 trillion in 2030. Luxury Goods in Brazil. Growth slows in 2015 due to economic uncertainty Luxury goods saw strong sales growth during the review period as a whole, benefiting from rapid growth in the country's mid- to high-income group prior to and at the start of the review period. From 2013, the country's economic growth however faltered, with 2015 seeing declining real GDP, high inflation, tax increases and rising unemployment.

Big beauty brands using lip-reading technology developed by U of T prof. Canadian technology originally developed years ago to enhance speech recognition is now being used by some of the world’s biggest beauty brands. University of Toronto engineering professor Parham Aarabi designed lip-reading software more than a decade ago that initially garnered interest from the military community. “The goal was to read lips and combine that with audio to do better speech recognition,” Aarabi said. Moment app can monitor mobile usage and tell you how obsessed you are. Stephen Hawking warns artificial intelligence could end mankind. Media playback is unsupported on your device Prof Stephen Hawking, one of Britain's pre-eminent scientists, has said that efforts to create thinking machines pose a threat to our very existence. UK drones: Concern over increase in use.