First dates: escalating and routines...in Asia. : seduction. 'Body map' reveals chaps won't let male strangers near their feet. Study found British people were most prudish out of five countries tested1,500 people coloured in body maps where they were happy to be touchedA 'touchability' index was created based on responses relating to 13 different social groups By Fiona Macrae Science Correspondent For The Daily Mail Published: 20:01 GMT, 26 October 2015 | Updated: 14:40 GMT, 27 October 2015 If you struggle to know when it is appropriate to give someone a hug or even simply pat them on the arm, help is at hand. 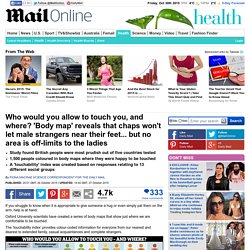 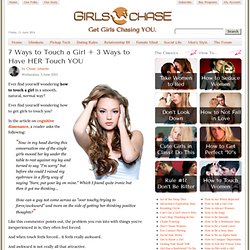 Ever find yourself wondering how to get girls to touch you? In the article on cognitive dissonance, a reader asks the following: “Now in my head during this conversation one of the single girls moved her leg under the table to rest against my leg and turned to say "I'm sorry" but before she could I raised my eyebrows in a flirty way of saying "Sure, put your leg on mine.

" Which I found quite ironic but then it got me thinking...How can a guy not come across as "over touchy/trying to force/awkward" and more on the side of getting her thinking positive thoughts?” Like this commenter points out, the problem you run into with things you're inexperienced in is, they often feel forced. And when touch feels forced... it feels really awkward. And awkward is not really all that attractive.

Can you Hug? Get Her in Bed. - Sexual Sub Communication in a Hug. How to hug a woman like a real man. Okay the first and MOST IMPORTANT thing to remember about hugging, kissing, or exchanging affection whether you're male or female exchanging with anyone is summed up in one simple word: Calibration. 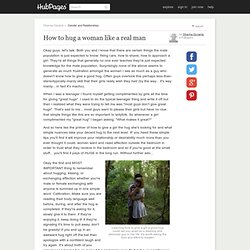 Make sure you are reading their body language well before, during, and after the hug is completed. If they're asking for it, slowly give it to them. if they're enjoying it, keep doing it! Tactics Tuesdays: How to Touch Women (the Scientific Way) These are questions millions of men scratch their head over every day… should you touch her on the date, and if so, how much? 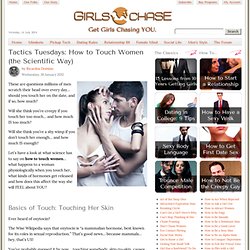 How to Flirt and Seduce With Touch: Part 1. Welcome back to The Attraction Doctor Do you ever wonder why some of your relationships go nowhere? 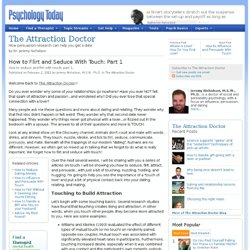 Have you ever NOT felt that spark of attraction and passion...and wondered why? Did you ever lose that special connection with a lover? Many people ask me these questions and more about dating and relating. They wonder why that first kiss didn't happen or felt weird. Look at any animal show on the Discovery channel. Over the next several weeks, I will be sharing with you a series of articles on touch. Let's begin with some touching basics.

Williams and Kleinke (1993) evaluated the effect of different types of mutual touch (or no touch) on randomly-paired, opposite-sex couples. Studies by Burgoon and associates have also found that touch leads to feelings of attraction. In two field experiments, Burgoon (1991) also established the various meanings conveyed through touch. If you are interested in someone romantically, or in the early stages of dating, find an excuse to touch them. </i>*} Why Touch Is Your Most Powerful Seduction Tool With Women. By Mr. 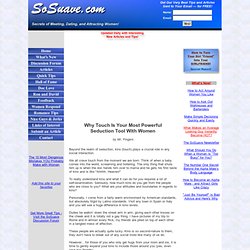 Fingers Beyond the realm of seduction, kino (touch) plays a crucial role in any social interaction. We all crave touch from the moment we are born. Think of when a baby comes into the world, screaming and hollering. The only thing that shuts him up is when the doc hands him over to mama and he gets his first taste of kino and is like "Ahhhh, Heaven! " To really understand kino and what it can do for you requires a lot of self-examination. Personally, I come from a fairly warm environment by American standards, but absolutely frigid by Latino standards. Dudes be walkin’ down the street arm in arm, giving each other kisses on the cheek and it is totally not a gay thing. These people are actually quite lucky. However... for those of you who only get hugs from your mom and sis, it is time to gently expand your kino to include those around you (yes, even your guy friends).