Video or still, how to, what with, and great examples.
Background image free for commercial use from Geralt on Pixabay -

Manifesto. Unsplash was created in 2013 as a simple tool for creators. 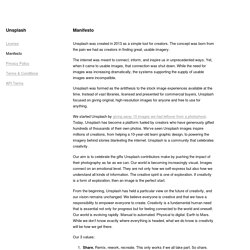 The concept was born from the pain we had as creators in finding great, usable imagery. The internet was meant to connect, inform, and inspire us in unprecedented ways. Yet, when it came to usable images, that connection was shut down. While the need for images was increasing dramatically, the systems supporting the supply of usable images were incompatible. Unsplash was formed as the antithesis to the stock image experiences available at the time. We started Unsplash by giving away 10 images we had leftover from a photoshoot.

Our aim is to celebrate the gifts Unsplash contributors make by pushing the impact of their photography as far as we can. From the beginning, Unsplash has held a particular view on the future of creativity, and our vision remains unchanged. Our 3 values: Share. 7 Smartphone Photography Tips & Tricks. 8 Brilliant Search Tools Hidden Within Google Photos. Google has become synonymous with search, so it’s great to know that it hasn’t neglected this feature in their products and services. 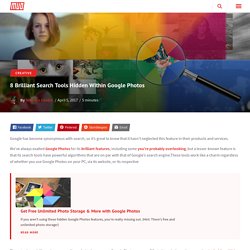 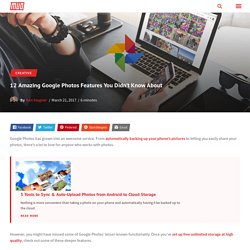 3 Tips And Tricks For Using Google Photos. Unsplash 5.0 – Unsplash Unfiltered – Medium. We started Unsplash in a dusty office above a grocery store. 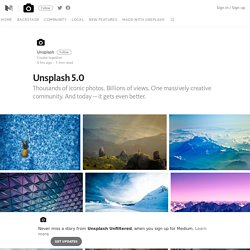 Back then, it was just Mikael and a Tumblr blog with 10 photos. Today, Unsplash is one of the most potent creative cauldrons on the internet: Thousands of photographers, millions of eyeballs, and billions of delicious photo views™ breaking the internet on a daily basis. But it’s not time to pat ourselves on the back. Not even close. So ‘No!’ to vertical video syndrome – Medium. So ‘No!’ 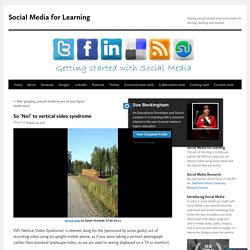 To vertical video syndrome Vertical video by Santeri Viinamäki CC BY-SA 3.0 VVS (Vertical Video Syndrome) is internet slang for the [perceived by some guilty] act of recording video using an upright mobile phone, as if you were taking a portrait photograph (rather than standard landscape video, as we are used to seeing displayed on a TV or monitor). Vertical video is often referred to as skinny and tall as when the video plays it only uses the centre third of the screen and has black space either side (as in the image above).

How to Make Google Photos Work for You with These Tips. Just over a year ago, Google launched Google Photos as an online photo sharing and storage platform. 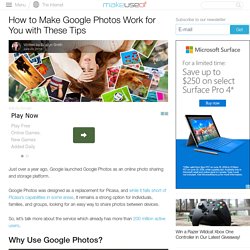 Google Photos was designed as a replacement for Picasa, and while it falls short of Picasa’s capabilities in some areas, it remains a strong option for individuals, families, and groups, looking for an easy way to share photos between devices. So, let’s talk more about the service which already has more than 200 million active users. Laughing and crying my way through the new Google Photos. I started using Google Photos after it first launched last week. 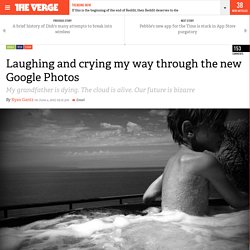 I was immediately impressed for all the reasons that Casey Newton mentioned in his review: simplicity, intuitive navigation and search, ease of use across devices, and incredible utility as a backup solution. I’m a longtime user of iPhoto and Time Machine, and an early adopter of Flickr, but this service seemed to promise peace of mind, secure cloud storage for my media memories. The feature that compelled me to upload all my photos in full resolution, however — despite fears that I Am The Product — is that Google Photos offers an experience that delights. The service delights by making it easy to search my memories for “family,” “Falmouth,” or “Christmas 2012.” How to Compose a Photograph: 5 Essential Rules to Follow. Are you disappointed by the photos you take? 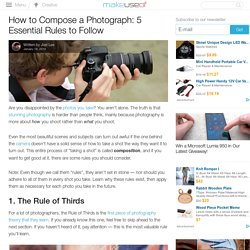 You aren’t alone. The truth is that stunning photography is harder than people think, mainly because photography is more about how you shoot rather than what you shoot. Even the most beautiful scenes and subjects can turn out awful if the one behind the camera doesn’t have a solid sense of how to take a shot the way they want it to turn out. 10 Simple Tricks to Boost Your Smartphone Photography. 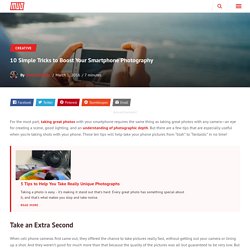 But there are a few tips that are especially useful when you’re taking shots with your phone. These ten tips will help take your phone pictures from “blah” to “fantastic” in no time! Take an Extra Second When cell phone cameras first came out, they offered the chance to take pictures really fast, without getting out your camera or lining up a shot. And they weren’t good for much more than that because the quality of the pictures was all but guaranteed to be very low. So take an extra second—make sure your composition is good, include interesting subjects, see if you can improve the lighting or the angle, and figure out where your viewer is going to be looking. Use Principles of Composition Get Close Ditch the Flash. JPEG, GIF, or PNG? Image Filetypes Explained and Tested. Do you know the differences between JPEGs, GIFs, PNGs, and other image filetypes? 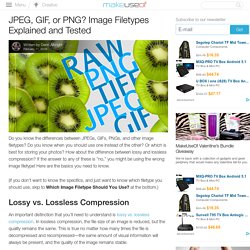 Do you know when you should use one instead of the other? Or which is best for storing your photos? How about the difference between lossy and lossless compression? If the answer to any of these is “no,” you might be using the wrong image filetype! Here are the basics you need to know. (If you don’t want to know the specifics, and just want to know which filetype you should use, skip to Which Image Filetype Should You Use?

Lossy vs. An important distinction that you’ll need to understand is lossy vs. lossless compression. Lossy compression, as you might expect, reduces the quality of the image, as information is lost every time you de- and recompress the file. 20 Photos That Will Make You Look Twice — Vantage. 20 brilliant photographs which hugely impressed us in 2015. Sometimes, you see a photograph which summons a whole storm of emotions inside. Often this is down to a perfectly chosen angle or a shot taken at just the right moment. Sometimes, it’s a shot of a stunning landscape or an awe-inspiring natural phenomenon.

But in other cases, it can be something as simple as the chronicling of our everyday lives from all around the world. Here, we’ve gathered together 20 of the most brilliant photographs we’ve seen this year. Some are amusing, some exciting, and others simply wonderful. Some very ’attentive’ judges at the European Games in Baku, Azerbaijan twitter. 8 photography tips for anyone with a camera (or a camera phone) The key to getting great photos isn’t just about having a nice camera. I’m a firm believer that good photography comes from smart photographers who think creatively and know how to make the most of what they’ve got, whether they’re working with fancy DSLR or an iPhone. Below are 8 non-technical, non-intimidating tips that I continue to refer to even after 10 years of taking pictures.