Hazel Moore is an eminent and professional writer, now she is imparting her experience and knowledge through informative blogs and articles. 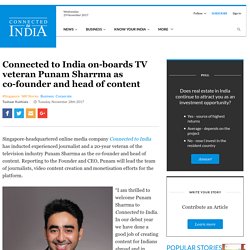 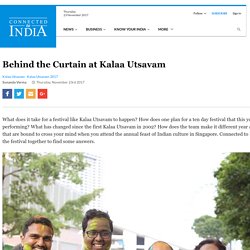 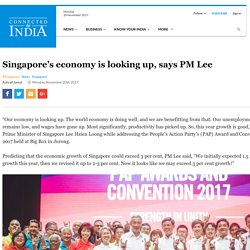 The world economy is doing well, and we are benefitting from that. Our unemployment remains low, and wages have gone up. Most significantly, productivity has picked up. So, this year growth is good,” said Prime Minister of Singapore Lee Hsien Loong while addressing the People’s Action Party’s (PAP) Award and Convention 2017 held at Big Box in Jurong. Predicting that the economic growth of Singapore could exceed 3 per cent, PM Lee said, “We initially expected 1.5 per cent growth this year, then we revised it up to 2-3 per cent. PM Narendra Modi in Singapore on June 1, 2018. Indian Prime Minister Narendra Modi will deliver the keynote address at the Shangri-La Dialogue on June 1 next year, stated the International Institute for Strategic Studies (IISS). 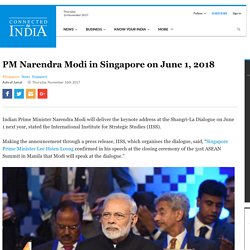 Making the announcement through a press release, IISS, which organises the dialogue, said, “Singapore Prime Minister Lee Hsien Loong confirmed in his speech at the closing ceremony of the 31st ASEAN Summit in Manila that Modi will speak at the dialogue.” Prime Minister, Shri Narendra Modi at the 12th East Asia Summit, in Manila, Philippines on November 14, 2017 Photo courtesy: The announcement assumes significance as India is organising a special regional Pravasi Bharatiya Divas (PBD) in Singapore to commemorate 25 years of partnership between India and the Association of South East Asian Nations (ASEAN) on January 6 and 7, 2018. The announcement has come close on the heels of a surge in the popularity ratings of Indian Prime Minister Narendra Modi conducted by Pew Research Center survey. Shah Rukh Khan picks three winners of the Raees Contest - Connected to India. 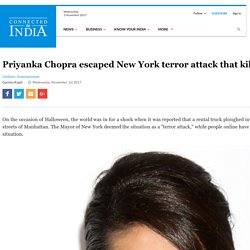 The actress, who is in New York shooting for Quantico season 3, said, the attack in Lower Manhattan took place just five blocks away from her house here. Changi Airport's Terminal 4 welcomes first flight - Connected to India. Passengers were given a rousing welcome at the newly opened Terminal 4 of Changi Airport in Singapore today as the first flight - Cathay Pacific Airways CX659 from Hong Kong - landed at the airport. 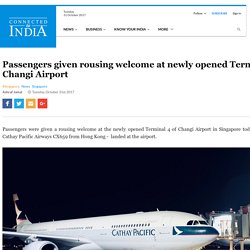 Cathay Pacific was the first airways to arrive at newly opened Terminal 4 of Changi Airport today. Photo courtesy: Twitter. High Commissioner to UK YK Sinha to talk on Brexit - Connected to India. Even as uncertainty looms large over the post-Brexit scenario, the Indian High Commissioner to the UK YK Sinha will be delivering a talk "UK and Brexit" proffering some insight for the Indian industry and business leadership to re-model their trade strategies. 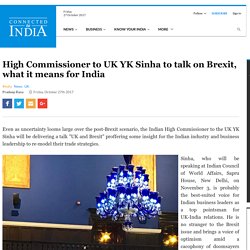 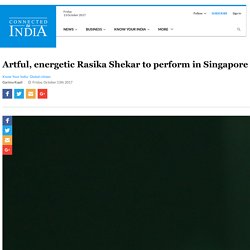 Photo courtesy: Talent Management Solutions Rasika Shekar, 28, who’s been performing Indian classical vocals and on the Indian bamboo flute since the age of 14, is one of the most popular singer-flautists in the entertainment Industry. Ranging from ghazals, semi-classical, Bollywood numbers and others, she performs a blend of Indian music and jazz repertoire. Born in Dubai and raised in New Jersey, Rasika is trained in Carnatic and Hindustani classical music. She earned a bachelor’s degree in Chemical engineering but soon after graduating, she started spending more time in India to learn Indian classical music. Esplanade: 15 Years of Performing - Kalaa Utsavam 2017. Walking around a city is the best way to befriend one. 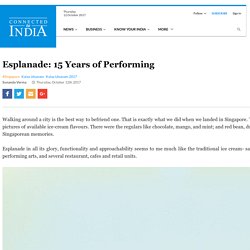 That is exactly what we did when we landed in Singapore. Two days old in the country we walked to Esplanade- Theatres on the Bay. It was late evening; the structure glittered in twinkling light. The breeze was light and our pace relaxed. We passed by an ice cream cart. SIA to use more sustainable and meatless ingredients for in-flight Meals. To promote environmental sustainability and support local farmers, Singapore Airlines (SIA) will use more sustainable ingredients in its in-flight meals under a novel initiative -‘Farm to Plane’, announced the airline today. 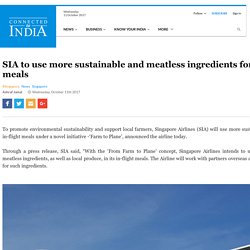 Through a press release, SIA said, “With the ‘From Farm to Plane’ concept, Singapore Airlines intends to use more sustainable and meatless ingredients, as well as local produce, in its in-flight meals. The Airline will work with partners overseas and in Singapore to source for such ingredients. Singapore Airlines has announced a novel initiative -‘Farm to Plane’, whereby it will serve more sustainable and meatless ingredients for in-flight meals.

Photo courtesy: Wikimedia In addition, Singapore Airlines’ International Culinary Panel (ICP) of world-renowned chefs will create in-flight menus using more sustainable ingredients and local produce from farms at the Airline’s destinations, such as cherry tomatoes, pumpkins, green beans and lettuce. Malayalees are significant part of Singapore Indian community: PM Lee - Connected To India. “The Malayalees are a small but significant part of the Singapore Indian community. Former President Devan Nair, Chief Justice Sundaresh Menon, and MAS Managing Director Ravi Menon are some outstanding Malayalees who have left a mark on Singapore,” asserted Prime Minister Lee Hsien Loong while speaking on the occasion of 100th anniversary of the Singapore Malayalee Association. Lee Hsien Loong, Prime Minister of Singapore receiving a nettipattam (an elephant caparison, a cloth made of gold and copper that is laid over the heads of elephants as a decoration and protection) as a token of appreciation from Jayakumar N, President of the Singapore Malayalee Association on the occasion of completion of centenary of Singapore Malayalee Association.

Minister for Trade and Industry (Industry) S Iswaran, Minister for Trade and Industry (Industry)was also present on the occasion. Must watch: 'Khwaab-Sa', the Hindi name for Shakespeare’s, A Midsummer Night’s Dream - Connected To India. Well known Indian actor and director, Atul Kumar, seen as the cold and callous Inspector Paul in the crime thriller Talvar, brings Shakespeare’s comedy, A Midsummer Night’s Dream, to Singapore, but with a twist and a new title, 'Khwab-Sa'.

The play will be performed during Kalaa Utsavam at the Esplanade Theatre Studio from Nov 17 to 19, at 3pm and 8pm. Atul had a chance entry into the world of theatre when he had to fill-in for an actor. This was in St. Xavier's School Delhi when, at age 14, he was asked to replace another actor for a play called, Afraid of the Dark. He played the role of a Mexican inmate to complete mastery, winning the best actor’s award for the role. Atul went on to become a part of a theatre group called Chingari, which produced experimental modern drama in the ‘80s and ‘90s.

Atul went on to train in Indian dance form, Kathakali and Kalarippayattu, a martial art, which originated in Kerala, Southern India. Sushma Swaraj to visit Singapore in January - Connected To India. Much loved and respected as an action lady, India’s Minister of External Affairs, Sushma Swaraj will be in Singapore as the Chief Guest of the India-ASEAN Pravasi Bharatiya Divas (PBD) to be held on January 6 & 7, 2018.

Aamir Khan in Singapore to promote ‘Secret Superstar’, inspires students at GIIS - Connected To India. Aamir Khan fulfilled his promise of visiting Singapore, made on August 2 via a media video conference. Star of the multi-million dollar hit Dangal visited the island nation on October 2 and made a huge impact. In town to promote his next movie, Secret Superstar, which hits the big screen on Deepavali, October 18, Aamir was joined by Advait Chandan, the director of the film. Aamir Khan being welcomed to Global Indian International School by students. Photo courtesy: GIIS In addition to holding a press conference and a consumer event during his visit, Aamir Khan visited the Global Indian International School (GIIS) as a part of the GIIS Leadership Lecture Series. Dubai International Film Festival - Connected to India.

Released from ISIS, Indian-origin Vatican priest set to visit India. Indian-origin Vatican priest Father Tom Uzhunnalil, who was rescued from Yemen over a year after he was abducted by ISIS, will visit Delhi, Bengaluru and Kerala. Father Tom Uzhunnalil. Photo courtesy: Vatican News Service The rescued priest's family said that he will reach Delhi on September 28, will be visiting Bengaluru on September 29 and Kerala on October 1.

Singapore to host regional Pravasi Bharatiya Divas 2018. Akshay Kumar turned 'Gold' at 50, shared the first poster of his next. Bollywood actor Akshay Kumar had a special tweet on his sweet 50. The National award winner tweeted, “Every cloud has a silver lining but with ur love my clouds got a lining of Gold! Changi Airport's Terminal 4 to open on Oct 31 - Connected to India. Two new Presidential Election applicants rejected for not being Malay. Overall, five applications were received by the Elections Department to contest the upcoming Singapore Presidential election. However, two applicants for the Presidential election are out of the running automatically as one declared himself to be Chinese while the other said that he does not consider himself to be a member of any official ethnic community here.

Following changes made to the Elected Presidency scheme passed by Parliament last November, the Presidential election has been reserved for members of the Malay community this year. Modi Met Indian diaspora Before BRICS summit. Indian Prime Minister Narendra Modi being welcomed by the Indian community in Xiamen on his arrival to attend the 9th BRICS Summit. Indian PM Narendra Modi interacts with Indian diaspora before Xiamen BRICS summit - Connected To India. Narendra Modi - BRICS Summit 2017 Highlights. BRICS has developed a robust framework for cooperation BRICS contribute stability and growth in a world drifting towards uncertainty A thrust on people-to-people exchanges is required intermingling will consolidate our links, deepen understanding Call for early creation of BRICS rating agency to cater to financing needs of sovereign & corporate entities of developing countries Affordable, reliable & sustainable access to energy is crucial for development; Renewable Energy is particularly important BRICS countries can work closely with International Solar Alliance to strengthen the solar energy agenda For the full BRICS Leaders Xiamen Declaration, click here.

Indian Prime Minister Narendra Modi (left) with Russian President Vladimir Putin (centre) and Chinese Premier Xi Jinping at the BRICS summit. Photos courtesy: Press Information Bureau, India Prime Minister Narendra Modi being welcomed by the President of the People’s Republic of China Xi Jinping, at the 9th BRICS Summit, in Xiamen. LISHA Ready to spread Happiness of Deepavali in Singapore. Little India Shopkeepers and Heritage Association or LISHA as it commonly known is all set to make ‘Little India’ even brighter as it kick-starts its Deepavali celebrations starting this weekend September 2. Photo courtesy: LISHA FB page. Search underway for 10 missing Navy sailors as US warship collides with merchant's vessel near Singapore Strait. US guided-missile destroyer USS John S McCain collided with a merchant vessel near the Singapore Strait today, according to a statement updated at 12.10pm Japan Standard Time (JST) released by US 7th Fleet Public Affairs from its Yokosuka headquarters in Japan.

Qatar crisis not to impact Indian interests, expats in Dubai: UAE FM. The visiting Minister of State for Foreign Affairs of the UAE Dr Anwar Gargash has said that the ongoing Qatar crisis will not affect the Indian working in UAE and Indian interests in the Gulf region. With drones, fireworks and cheerleaders, gear up for a festive SCC T20 tournament. The 5th International SCC T20 tournament kicked off today with a press conference introducing the captains of the eight participating teams and a Q&A session with the captains and marquee players Muttiah Muralitharan and Ferveez Maharoof.

President of the Singapore Cricket Club Sher Baljit Singh welcomed the players and audience to one of their signature events, introducing the history of the club. “The cricket section and the organising committee to ensure we will have a great event. No threat of spread of diphtheria in Singapore. National Day message: PM Lee highlights 3 longer-term issues Singapore has to focus on. Late Om Puri’s last film ‘Mr Kabaadi’ to release on August 25.