The Sunni-Shia Divide. Violence between Islam’s sects has been rare historically, with most of the deadly sectarian attacks directed by clerics or political leaders rather than erupting spontaneously. 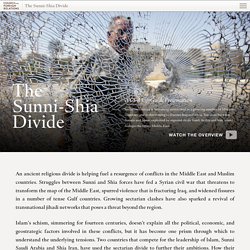 Extremist groups, many of which are fostered by states, are the chief actors in sectarian killings today. Two of the most prominent terrorist groups, Sunni al-Qaeda and Shia Hezbollah, have not defined their movements in sectarian terms, and have favored using anti-imperialist, anti-Zionist, and anti-American frameworks to define their jihad, or struggle. What's the Difference Between Sunni and Shia Muslims? The Martyr Of Imam Hussain ('Alayhi Salam) - (The Last Moments) Ashura 2015 - Ashura Around The World. Legendary story of Imam Hussain. Spread of Islam.