Human Respiratory System - Diagram - How It Works. The primary organs of the respiratory system are the lungs, which function to take in oxygen and expel carbon dioxide as we breathe. 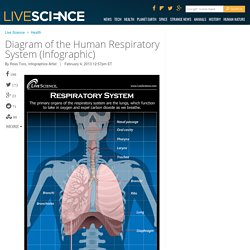 Prehistoric Van Goghs: Artists Used Pointillism 38,000 Years Ago Nineteenth-century artists, such as Georges Seurat and Vincent van Gogh, weren't the first to use pointillism, according to a discovery of 38,000-year-old decorated limestone tablets in France. The gas exchange process is performed by the lungs and respiratory system. Air, a mix of oxygen and other gases, is inhaled. In the throat, the trachea, or windpipe, filters the air. Once in the lungs, oxygen is moved into the bloodstream. Red blood cells collect carbon dioxide from the body’s cells and transports it back to the lungs. An exchange of oxygen and carbon dioxide takes place in the alveoli, small structures within the lungs. The diaphragm is a dome-shaped muscle below the lungs that controls breathing. 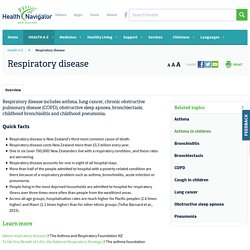 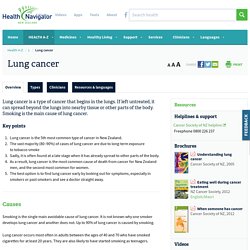 If left untreated, it can spread beyond the lungs into nearby tissue or other parts of the body. Smoking is the main cause of lung cancer. Key points Lung cancer is the 5th most common type of cancer in New Zealand.The vast majority (80–90%) of cases of lung cancer are due to long-term exposure to tobacco smokeSadly, it is often found at a late stage when it has already spread to other parts of the body. As a result, lung cancer is the most common cause of death from cancer for New Zealand men, and the second most common for women.The best option is to find lung cancer early by looking out for symptoms, especially in smokers or past smokers and see a doctor straight away. Causes Smoking is the single main avoidable cause of lung cancer. Lung cancer occurs most often in adults between the ages of 40 and 70 who have smoked cigarettes for at least 20 years. Second-hand smoking (passive smoking) may also cause lung cancer.

Symptoms. Health Navigator NZ. Pneumonia is an infection of the lungs. 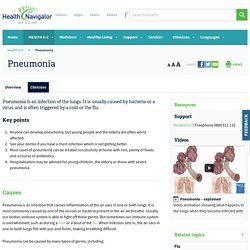 It is usually caused by bacteria or a virus, and is often triggered by a cold or the flu. Key points Anyone can develop pneumonia, but young people and the elderly are often worst affected.See your doctor if you have a chest infection which is not getting better.Most cases of pneumonia can be treated successfully at home with rest, plenty of fluids and a course of antibiotics.Hospitalisation may be advised for young children, the elderly or those with severe pneumonia.

Causes Pneumonia is an infection that causes inflammation of the air sacs in one or both lungs. Pneumonia can be caused by many types of germs, including: Bacteria: the most common bacteria is Streptococcus pneumoniae (pneumococcus). Asthma. Lung cancer – causes, symptoms, treatment, prevention - Southern Cross. Lung cancer is a malignant lung disease primarily caused by cigarette smoking. 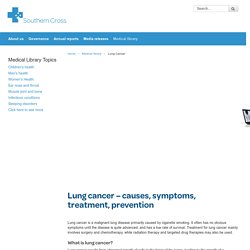 It often has no obvious symptoms until the disease is quite advanced, and has a low rate of survival. Treatment for lung cancer mainly involves surgery and chemotherapy, while radiation therapy and targeted drug therapies may also be used. What is lung cancer? Lung cancer results from abnormal growth of cells in the lining of the lungs, leading to the growth of a malignant tumour. There are two different types of lung cancer – small cell lung cancer (SCLC) and non-small cell lung cancer (NSCLC) – which differ in terms of how they grow and spread to other parts of the body and how they’re treated. Lung cancer is usually fatal – the overall survival rate is about 16% at five years after diagnosis. Causes The development of lung cancer is strongly associated with cigarette smoking – approximately 90% of lung cancers are attributable to tobacco use.