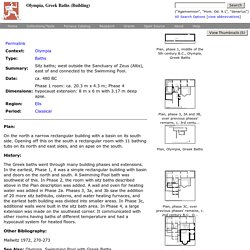 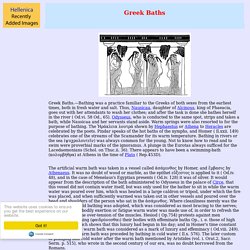 —Bathing was a practice familiar to the Greeks of both sexes from the earliest times, both in fresh water and salt. Thus, Nausicaa, daughter of Alcinous, king of Phaeacia, goes out with her attendants to wash her clothes; and after the task is done she bathes herself in the river ( Od.vi. 58 Od., 65). Odysseus, who is conducted to the same spot, strips and takes a bath, while Nausicaa and her servants stand aside. Warm springs were also resorted to for the purpose of bathing. The Ἡράκλεια λουτρά shown by Hephaestus or Athena to Heracles are celebrated by the poets. The artificial warm bath was taken in a vessel called ἀσάμινθος by Homer, and ἔμβασις by Athenaeus. After bathing both sexes anointed themselves with oil, in order that the skin might not be left harsh and rough, especially after warm water.

The baths (βαλανεῖα) were either public (δημόσια, δημοσιεύοντα) or private (ἴδια, ἰδιωτικά). Secrets of Lost Empires. Welcome to the companion Web site to the NOVA program "Roman Bath," scheduled for rebroadcast on January 31, 2006. 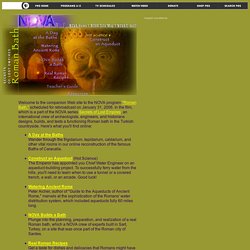 In the film, which is a part of the NOVA series Secrets of Lost Empires, an international crew of archeologists, engineers, and historians designs, builds, and tests a functioning Roman bath in the Turkish countryside. Here's what you'll find online: A Day at the Baths Wander through the frigidarium, tepidarium, caldarium, and other vital rooms in our online reconstruction of the famous Baths of Caracalla. Construct an Aqueduct (Hot Science) The Emperor has appointed you Chief Water Engineer on an aqueduct-building project. To successfully ferry water from the hills, you'll need to learn when to use a tunnel or a covered trench, a wall, or an arcade. Good luck!

A Day at the Baths | Construct an Aqueduct | Watering Ancient Rome NOVA Builds a Bath | Real Roman Recipes | Resources | Transcript © | created January 2000. Roman Baths. Roman Baths. Of all the leisure activities, bathing was surely the most important for the greatest number of Romans, since it was part of the daily regimen for men of all classes, and many women as well. 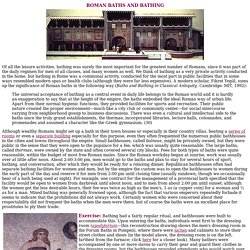 We think of bathing as a very private activity conducted in the home, but bathing in Rome was a communal activity, conducted for the most part in public facilities that in some ways resembled modern spas or health clubs (although they were far less expensive). Ancient Roman Baths - Thermae, Baths of - Caracalla, Diocletian, Trajan. Ancient Roman Baths Bathing played a major part in ancient Roman culture and society. 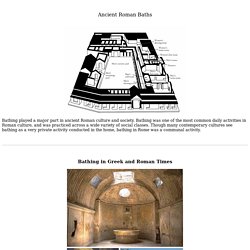 Bathing was one of the most common daily activities in Roman culture, and was practiced across a wide variety of social classes. Though many contemporary cultures see bathing as a very private activity conducted in the home, bathing in Rome was a communal activity. Bathing in Greek and Roman Times Some of the earliest descriptions of western bathing practices came from Greece.

Greek mythology specified that certain natural springs or tidal pools were blessed by the gods to cure disease. At Serangeum, an early Greek balneum (bathhouse, loosely translated), bathing chambers were cut into the hillside from which the hot springs issued. Greek Medicine: THE GRECO-ROMAN BATH. The ancient Greeks and Romans had the wisdom and insight to know that bodily cleanliness was an essential component of good hygiene and good health. 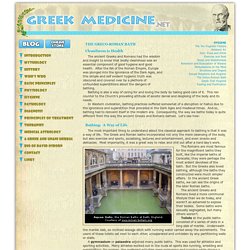 After the fall of the Roman Empire, Europe was plunged into the ignorance of the Dark Ages, and this simple and self evident hygienic truth was obscured and covered over by a plethora of unfounded superstitions about the dangers of bathing. Bathing is also a way of caring for and loving the body by taking good care of it. This ran counter to the Church's prevailing attitude of ascetic denial and despising of the body and its needs. In Western civilization, bathing practices suffered somewhat of a disruption or hiatus due to the ignorance and superstition that prevailed in the Dark Ages and medieval times. And so, bathing had to reinvent itself in the modern era. The most important thing to understand about the classical approach to bathing is that it was a way of life. An ancient Greek steam bath was called a Laconia. Roman Baths. Roman baths were part of the day-to-day life in Ancient Rome. 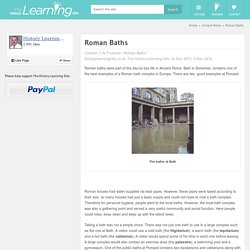 Bath in Somerset, contains one of the best examples of a Roman bath complex in Europe. There are two good examples at Pompeii. Roman houses had water supplied via lead pipes. However, these pipes were taxed according to their size, so many houses had just a basic supply and could not hope to rival a bath complex. Therefore for personal hygiene, people went to the local baths. Taking a bath was not a simple chore. The building of a bath complex required excellent engineering skills. Water had to be constantly supplied. It was very cheap to use a Roman bath. However, not everyone was overjoyed by them: Gellert Spa and Bath - Budapest.