Designeranimals - Kea. The Kea is formally known as Nestor notabilis in Latin/ Greek (Nestor in Greek is a genus of Psittesidae, notabilis is noteworthy), the Kea is one of the alpine parrots in the world. 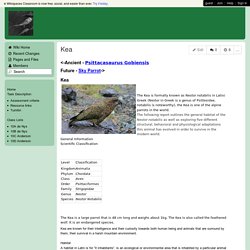 The following report outlines the general habitat of the Nestor notabilis as well as exploring five different structural, behavioral and physiological adaptations this animal has evolved in order to survive in the modern world.General Information Scientific Classification The Kea is a large parrot that is 48 cm long and weighs about 1kg. The Kea is also called the feathered wolf. It is an endangered species. Kea are known for their intelligence and their curiosity towards both human being and animals that are surround by them, their survival in a harsh mountain environment.

They most inhabit high-altitude forest and alpine basins, though birds will often frequent lowland flats. Kea. The kea is an unusual parrot. 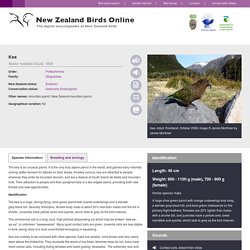 It is the only truly alpine parrot in the world, and gained early notoriety among settler farmers for attacks on their sheep. Innately curious, kea are attracted to people wherever they enter its mountain domain, and are a feature at South Island ski-fields and mountain huts. Hutton's shearwater, Puffinis huttoni. Hutton's shearwater is one of the few seabird species that has survived on the mainland of New Zealand. 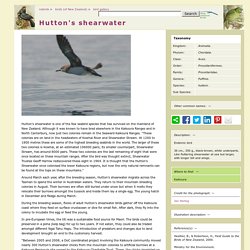 Although it was known to have bred elsewhere in the Kaikoura Ranges and in North Canterbury, now just two colonies remain in the Seaward Kaikoura Ranges. Hutton's shearwater. Hutton’s shearwater is one of the few New Zealand seabirds that breeds solely on the mainland. 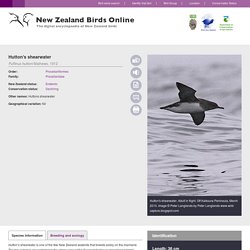 The two colonies are restricted to the alpine zone of the Seaward Kaikoura mountains behind Kaikoura. Spur-winged plover. The New Zealand spur-winged plover population has a unique conservation trajectory among our native bird species. 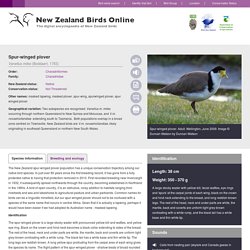 In just over 80 years since the first breeding record, it has gone from a fully protected native to having that protection removed in 2010. First recorded breeding near Invercargill in 1932, it subsequently spread northwards through the country, becoming established in Northland in the 1980s. A bird of open country, it is an obtrusive, noisy addition to habitats ranging from riverbeds and sea and lakeshores to agricultural pasture and urban parklands. Common names for birds can be a linguistic minefield, but our spur-winged plover should not to be confused with a species of the same name that occurs in central Africa. Morepork. The morepork is a small, dark, forest-dwelling owl. 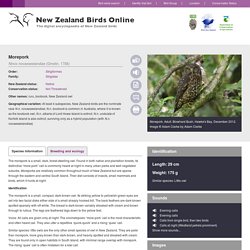 Found in both native and plantation forests, its distinctive “more-pork” call is commonly heard at night in many urban parks and well-vegetated suburbs. Moreporks are relatively common throughout much of New Zealand but are sparse through the eastern and central South Island. Their diet consists of insects, small mammals and birds, which it hunts at night. Identification. Stitchbird. The stitchbird (hihi) was both rare and poorly known until the 1990s, as few people had an opportunity to visit the single remnant population on Little Barrier Island. 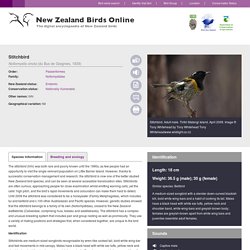 However, thanks to successful conservation management and research, the stitchbird is now one of the better studied New Zealand bird species, and can be seen at several accessible translocation sites. Stitchbirds are often curious, approaching people for close examination whilst emitting warning calls; yet the calls’ high pitch, and the bird’s rapid movements and colouration can make them hard to detect. Until 2006 the stitchbird was considered to be a honeyeater (Family Meliphagidae), which includes tui and bellbird and c.100 other Australasian and Pacific species. Kākāpō: New Zealand native land birds - kakapo. The kākāpō (night parrot) is one of New Zealand’s unique ‘treasures’ with only 126 known surviving birds. 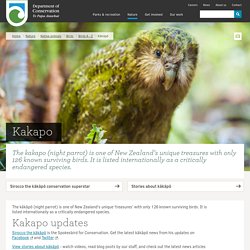 It is listed internationally as a critically endangered species. Black mudfish: Mudfish. The black mudfish can be found in Waikato, along with Auckland and Northland. 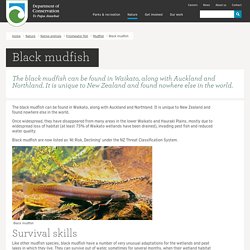 It is unique to New Zealand and found nowhere else in the world. Once widespread, they have disappeared from many areas in the lower Waikato and Hauraki Plains, mostly due to widespread loss of habitat (at least 75% of Waikato wetlands have been drained), invading pest fish and reduced water quality.

Black mudfish are now listed as 'At Risk, Declining' under the NZ Threat Classification System. Black mudfish Survival skills Like other mudfish species, black mudfish have a number of very unusual adaptations for the wetlands and peat lakes in which they live. During this time, black mudfish slowly lower their metabolism, reducing the amount of energy they need to live (in a similar way to hibernating bears, and sometimes known as 'aestivation' in mudfish), but immediately wriggle into life when water returns.

Black mudfish populations can be found at Whangamarino Wetland in Waikato Threats. Striped skink: Lizards. Very little is known of its ecology and habits and all sightings and records of this skink can provide valuable clues to help DOC its continued survival. 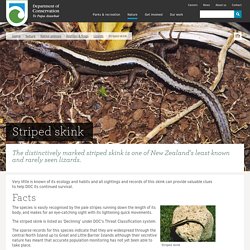 Facts Striped skink The species is easily recognised by the pale stripes running down the length of its body, and makes for an eye-catching sight with its lightening quick movements. The striped skink is listed as ‘Declining’ under DOC's Threat Classification system. The sparse records for this species indicate that they are widespread through the central North Island up to Great and Little Barrier Islands although their secretive nature has meant that accurate population monitoring has not yet been able to take place.

Kiwi adaptations. New Zealand Bellbird: NZ Bellbird Adaptations. Millions of years ago, New Zealand was split apart from Australia. As New Zealand grew into a place with lush forests and large mountain ranges the birds, including the Bellbird were forced to adapt to the new environment. At that time there was only bird predators such as the eagle, falcon and owl, which made escaping from predators much harder than it is today. The Bellbird and all other NZ birds developed defence mechanisms to keep them hidden from feathers such as the Bellbirds green feathers, which blend with the environment. They also grew larger and lived longer however they have become slower breeders. The Bellbird's personal adaptation is it's feathers which blend with the forest.

The female Bellbird has mainly green feathers with a black beak and feather ends. Seaworld. Swimming Swimming speed and duration are closely tied: high-speed swimming probably lasts only seconds, while low-speed swimming may last for long periods of time. Bottlenose dolphins routinely swim at speeds of about 5 to 11 kph (3-7 mph). Exercise studies indicate that bottlenose dolphins can reach burst (maximum) speeds of 29 to 35 kph (18-22 mph). Bottlenose dolphins can reach bursts of speed up to 29-35 kph (18-22 mph). A dolphin's characteristic fusiform shape is quite energy-efficient for swimming. Gecko Facts. Sea lions.

Scientific name: Phocarctos hookeri Hooker’s sea lions, also known as New Zealand sea lions, are one of only five species of sea lions in the world, the others being the Australian sea lion, the South American sea lion, the California sea lion and Steller sea lion. Physical description and related species Adult male sea lions can weigh over 400 kg and will aggressively defend harems of up to about 25 females from other males during the breeding season. 6. – Seals. The New Zealand sea lion (Phocarctos hookeri) is also known as Hooker’s sea lion, and to Māori as whakahao. Its main food is fish and cephalopods such as squid and octopus. Appearance. Adaptations for diving – Seals. Adaptations of the Tuatara. Today we are going to take a trip back to a time when dinosaurs roamed the earth! Well, not quite but this particular reptile comes from a direct lineage of reptiles that ran with the dinosaurs.

The tuatara may look like a lizard but it is actually the last remaining species of a reptile group called Sphenodontia. Really, how old could this reptile be? Karearea NZ Falcon 2012 Bird of The Year WInner. Native bird adaptations. New Zealand separated from Gondwana around 65 million years ago. Due to the geographical isolation and a lack of ground-dwelling predators, our birds evolved unique characteristics.

Flight was not required to escape predators, so birds such as the kiwi, takahē and (now extinct) moa adapted to these conditions by developing a large body size and loss of flight. Adaptation is an evolutionary process Adaptation is an evolutionary process whereby an organism becomes increasingly well suited to living in a particular habitat. Fantail/pīwakawaka: New Zealand native land birds. 7. – Evolution of plants and animals. Plant and animal groups on islands often undergo radiations – where one species rapidly evolves into many species that may live in different environments.

On islands there are usually few plant and animal types, which reduces competition. Also, mountainous island archipelagos offer diverse habitats where new species can evolve. New Zealand lost most of its Gondwanan plants and animals progressively as it sank into the ocean. Around 30 million years ago, the land area was probably less than 20% of its current size. Many groups of plants and animals became extinct or were greatly reduced. For example, from a single moa ancestor, which lived around 30 million years ago, at least 10 moa species evolved.

Insect groups have also radiated into many specialised forms. Reasons for radiation For many plant and animal groups the opportunity to radiate was provided by three factors: